All of Me by Laura Winters at Barrington Stage 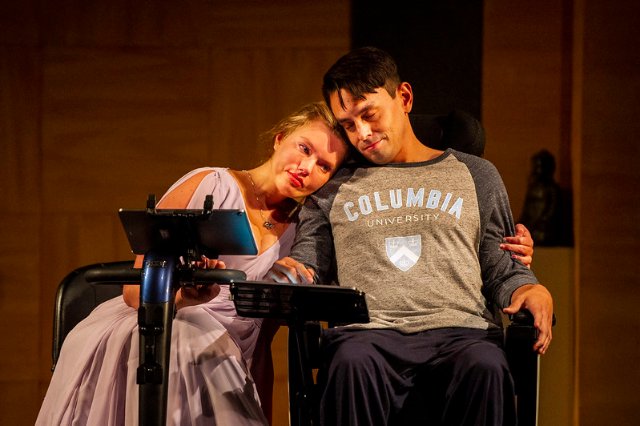 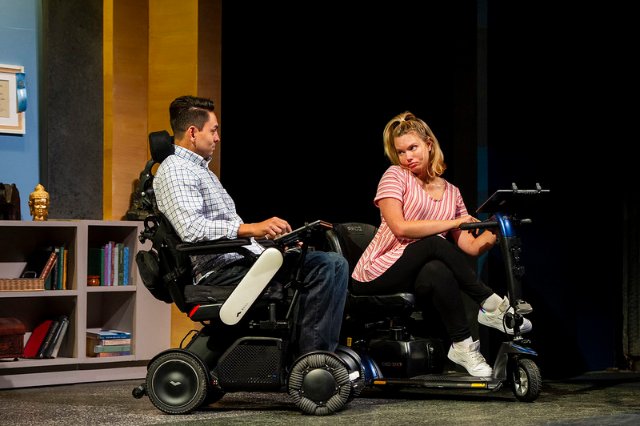 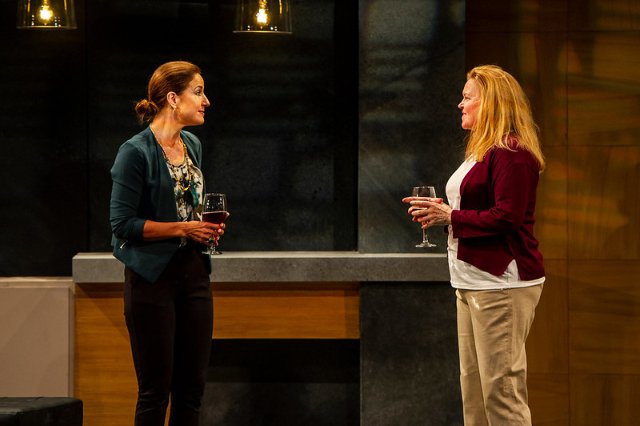 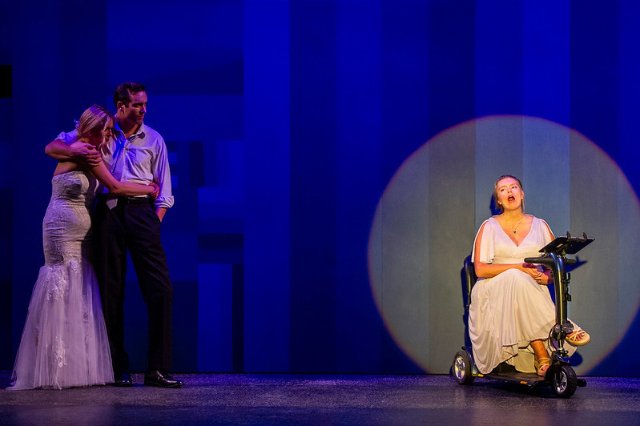 Through October 9 All of Me by Laura Winters, the World Premiere of the Burman New Play Award Winner, will be performed on the Boyd-Quinson Main Stage.

The play, which addresses the issue of AAC is a harrowing, poignant, powerful and insightful theatrical experience. The riveted audience responded with frequent bursts of applause.

AAC stands for alternative and augmentative communication, and it refers to any method of communicating that isn’t spoken language. Although things like sign languages, writing, and drawing technically qualify as AAC, usually it’s used to refer to communication that’s aided with a tool or device.

Lucy, played by the remarkable Madison Ferris, has a degenerative neurological disease that surfaced after high school and is atrophying her muscles. Although she can still produce sounds with her voice, she primarily uses a text-to-speech Augmentative and Alternative Communication device to speak.

The opening scene is performed on a shallow stage with a minimalist, geometric wall with two doors designed by Brian Prather. From opposite sides of the stage the disabled actors wheel toward each other. Lucy in her mobile scooter, and Alfonso (Danny J. Gomez) in a mobilized wheel chair.

It’s a chance encounter, but what are the odds? Tapping messages on I Pads, after an interval, their dialogue is conveyed by robotic voices. We are amazed at the speed and complexity of their communication. It is a version of texting but converted to sound.

There is mutual interest which she conveys in a flirty manner compared to his more stodgy, reserved persona. It’s that contrast of opposites attracting that develops into a complex romance.

Prather creates a mess for her chaotic home, with a banged together, dysfunctional wooden ramp. This sharply contrasts with the sleek, modernist design of Alfonso’s home where we meet his mother Elena (Maggie Bofill) a well heeled Latina attorney reeking of elegance and style.

The pedestrian writing of Winters sets up social and class contrasts and resonating similarities resembling a sit com. That results in characters that need fleshing out to be more credible.

Moose, for example, is not given much to work with. His character, with a bit of nip and tuck, could be Meathead from All in the Family. For a “job” he sits on the couch and gambles on line. Through a scheme proposed by Lucy he sells her meds. He comes home having won $10,000 that he then lost save for $1,200, half of which goes to the mortgage.

Drugs and addiction are a leitmotif. Connie’s husband is addicted to pain killers and was tossed to the curb. We learn that Elena’s husband does lines but only at corporate events. Alfonso outs his father by mentioning dipping at a wedding. Elena is hooked on “mother’s little helpers” and in a contrived scene is caught scoring from Moose.

Monroe’s ‘parallel lives’ are hardly on a par with Plutarch’s.

While feeling bogged down by the cheap laughs of a sit com, exacerbated by scenes from a marriage on of all things, Lucy’s birthday, I found myself utterly enthralled by the performance of Ferris. She is an astonishingly gifted, fluid and inventive actress.

We are intrigued by how she perches cross legged on the scooter which she whips around on like a flexible flyer. The assisted mobility device is an extension of her character and charismatic persona. She also has a cornucopia packed with expressions, gestures and maneuvers.

Connie overhears them and is outraged. Both she and Elena treat their disabled children as just that. Alfonso sharply responds to the reprimand that they are consenting adults.

Amazingly the attraction is almost entirely physical. They could not be more different. He is wealthy, educated and sophisticated. Contrast his master’s from Columbia to her high school diploma. He tries to suggest some on-line classes while she is content to spend the coming decades as a greeter at Walmart’s.

He asks what she sees as her future for which Lucy has no answer. She comes to realize that they will have a full life together and that he is unique in believing in her.

Much is made of the wedding. It seems that both sisters are singers of whom Lucy is far more gifted. She still has some voice that is in a state of constant degenerative decline.

The staggering high point of the drama comes when Lucy bravely manages to sing at her sister’s wedding. I fell to pieces hearing her heart wrenching rendering.

In 2017 Ferris was the first disabled actress to appear on Broadway as Laura in Glass Menagerie. It’s brilliant that we get to see this iconic performer in Pittsfield.