Proving Up Arrives in New York 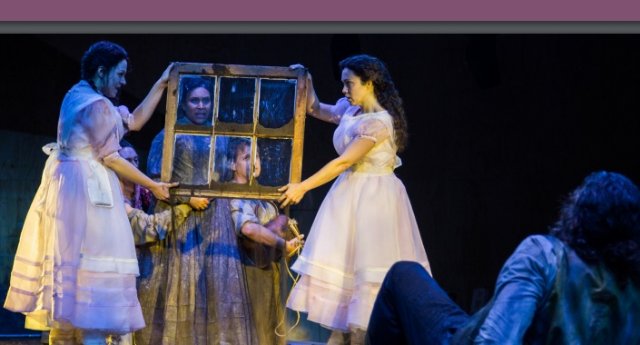 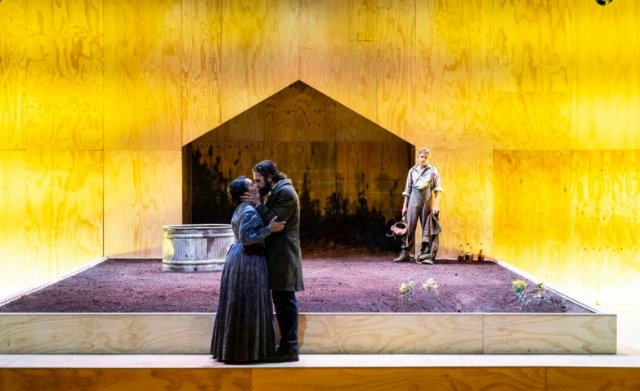 A family arrive to claim 160 acres in Nebraska 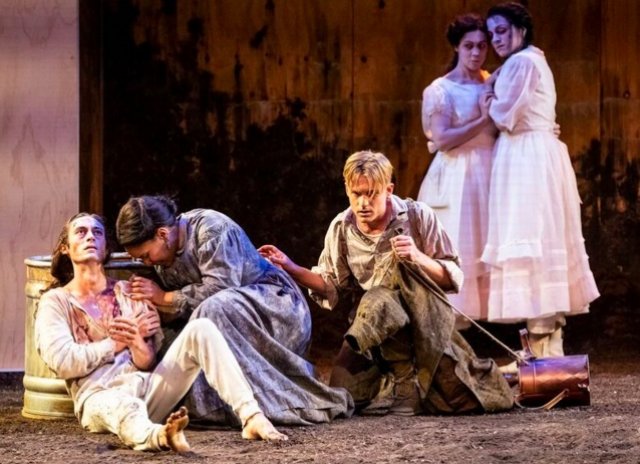 A damaged son, his mother and his dead sisters with brother Miles 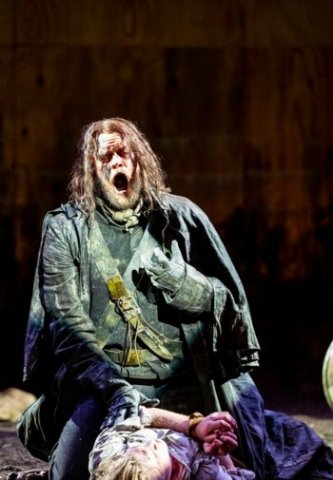 Andrew Harris and Michael Slattery as the Sodbuster and Miles

Aware that all art forms now compete with Netflix, composer Missy Mazzoli and librettist Royce Vavrek seek out stories for their musical theater that will attract audiences. Mazzoli, a masterful young composer, can go very dark in tales because her music, in its blocks of beauty no matter what the subject, is compelling and evocative. Best to listen to it on You tube to get the effect.

Mazzoli is mistress of silent space, the bass growling and the delicate top chimes of the piano’s upper register. Voice in song often springs from an orchestral rhythmic impulse. These are set off by a note or a drum beat to a delicious thickness. Emotionally intense moments are enhanced by thinner line, eliciting dryness and an odd turning to dust.

Silence is dared. As the poem begins, music lines barely exist, and are often stripped down to their dry essence. We are waiting for the drought to end and lush tones that are almost moist themselves as the rain arrives to end drydown.

Thudding bass lines often underpin tinkling piano tones. Mazzoli also has a gift for launching a singer’s line, or the transfer from one instrument to another, by propulsion, notes leaping forward and increasing in intensity. The music feels like waves tumbling forward in a loose block.

The most striking characters are Ma and the Sodbuster. Talise Trevigne stretches her voice wide and beautifully. As Ma, she is the lynchpin of the household. The realist and the one who suffers most as her children die away.

The Sodbuster is evil incarnate, driven by death and the tough land he has come to. The figure of the Sodbuster is swarthy, swirling in a long black coat, with no good left in him. Andrew Harris too stretches. He is growling in his bass and then leaps to falsetto.

Each figure represents a quality in the mosaic that makes up life on the prairie. Laura Ingalls Wilder has been sweetened, but much of her portrait of the Midwest is harsh, the difficulties overwhelming. Willa Cather confirms this.

In adapting a story by Karen Russell, the arc lightly remains. The texture does. Ma is anguished and yet able to believe, as each of her children is taken from her by death. Her husband, Pa, is consumed by alcohol early in the tone poem. Crawling in sod, bottle in hand, he cannot rise to the occasion. The man of the house becomes 11-year-old Miles when his older brother is crippled by a bloody accident.

All of this is captured in Mazzoli’s orchestration and the lines she has created for singers. Ensemble singing is thick with feeling: hope that the inspector will come and confirm the land they had cared for against all of nature’s odds for five years. Houses are to have one window, and the one in the neighborhood of Proving Up is passed around in a cooperative neighborly gesture.

Tough life on the prairie comes to the ear as Christopher Rountree conducts an ensemble of ICE performers.

Missy Mazzoli likes to create landscapes in sound. She will give us the desert next. She succeeds in spades, growls and tinkles in Proving Up.