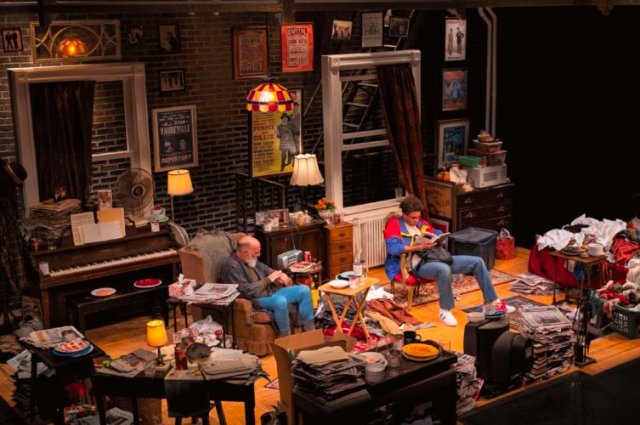 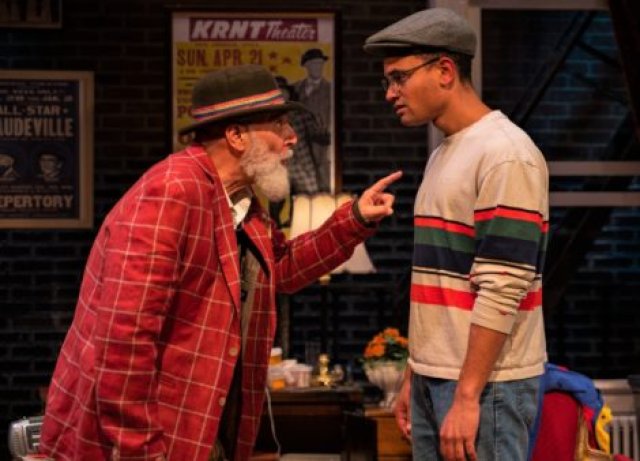 Pompey makes a point to Jet. 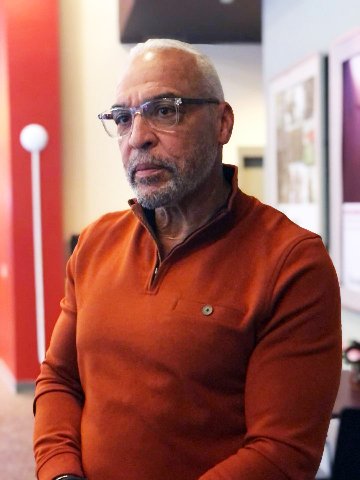 Golden Leaf Ragtime Blues is a thirty-year-old play by the Chicago based, Charles Smith. It has been rewritten for a world premiere by Shakespeare & Company. The playwright attended opening night. Raz Golden has deftly directed the revised script.

Generally, there is no curtain in the intimate Elayne P. Bernstein Theatre but one was jury rigged for this production. Through translucent red material we heard the ragtime piano tune “The Entertainer” by Scott Joplin.

Initially, the front was pinned back to reveal an amazingly cluttered apartment (designed by Theron Wineinger). The back wall has windows opening to an alley comprising a brick wall. One window opens to a fire escape which provides a plot point.

The detritus of the space occupied by the octogenarian Pompey (Glenn Barrett) entails piles of laundry, dirty dishes, stacks of newspapers, and numerous empty cans of Spaghetti-O’s. The holy mess of stuff creates the ambiance of the North Side of Chicago in 1993.

With sprightly contrarian humor, and an array of surprisingly agile moves, Pompey is revealed as one half of the vaudeville team of Pompey and Ollie (Kevin G. Coleman). We learn that Pompey teaches standup comedy to residents of a retirement home that he dreads one day being moved to.

It is apparent to his beleaguered daughter, Marsha (Kristen Moriaty), that his disheveled lifestyle, atrocious diet and hygiene are no longer sustainable. But Pompey is perfectly content with his fading memories of show biz. The walls display framed posters from his career.

Ollie shows up and they work on their routine. The actors prove to be masterfully adept at the unique vaudeville delivery. We are thoroughly amused and entertained. But then Pompey keeps missing lines. It prompts Ollie to announce that he is quitting the act. He is off to one of those dread retirement homes from which no traveler returns. Indeed, later in the one-act play, he returned as a ghost, barefoot in hospital garb.

While exiting Ollie tears down the ersatz curtain revealing the full stage.

We hear a loud knock on the door (sound by Carsen Joenk) and in a flustered bluster Marsha makes an all-too-periodic visit. It becomes apparent that while always on the circuit making a living Pompey wasn’t much of a parent. Marsha comes by partly through empathy but also motivated by professional commitment. Their strained relationship is more dutiful than loving.

There is a comically diverting charade of finding his pants amid all the soiled laundry.

Accompanying her is the teenaged Jet (Logan Slater) who is her ward. This sullen youth has bounced around the juvie and foster home circuit. We get a social justice thumbnail of that horrific, dysfunctional system. Just when he feels settled by new care providers, who profess love and support, he gets dumped back into the tank. This has happened more than a dozen times.

Marsha aspires to officially adopt Jet if he follows the rules. One more violation and that door will close. We feel that edge of anxiety and distrust in Slater’s finely honed performance.

When she leaves, and later returns with groceries, Jet and Pompey are alone together. Marsha has tasked them to clean up the pad. Initially distant, perhaps to pass time, they engage in dialogue. Pompey looks upon him as a potential new partner and they work on a routine. Jet’s improvs are hilariously raunchy.

Then racism creeps in as Pompey fears being robbed by this foster kid. It comes down to accusations about a watch that Pompey insists has been boosted from him. Jet counters that it was a gift from his now long gone father. It’s all that he has of him.

There is a tussle and Pompey calls the cops. The trope, however, is that the phone has been disconnected through non payment. Jet is skittish as Pompey tries to explain that the cops aren’t coming.

Then the phone rings and things fall apart in this well crafted and engaging play. We left with many pull-out talking points about vaudeville, ragtime, aging, racism, welfare and most importantly the never ending human comedy.