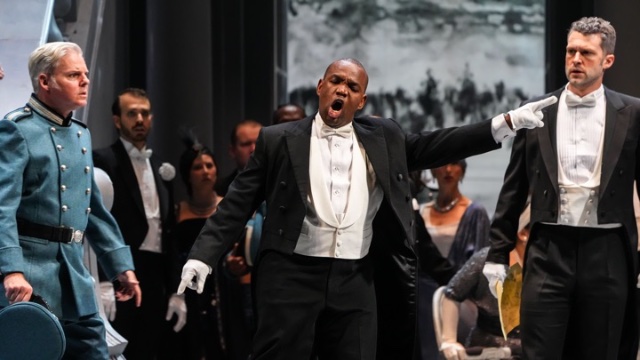 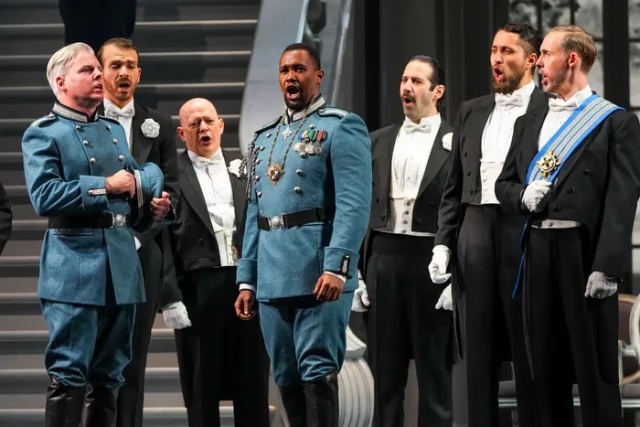 Khanyiso Gwenxane at the center sings the title role in Opera Philadelphia's stunning production of Otello. 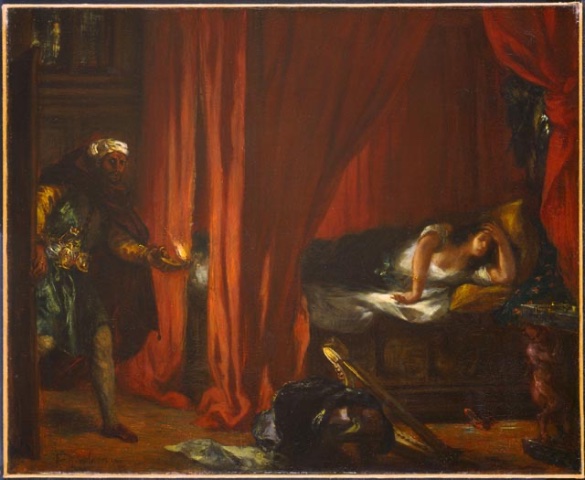 Eugène Delacroix was fascinated by Rossini's version of the Otello story.

Opera Philadelphia is reviving Gioachino Rossini’s Otello. The featured role is Rodrigo, sung by Lawrence Brownlee, artistic advisor to the company and one of the world’s leading bell cano tenors.

Beethoven told Rossini that he should stay away from serious drama. It was not in his nature. That is not the only reason Rossini’s serious opera Otello has been largely ignored. When Giuseppi Verdi and Arrigo Bioto wrote their Otello, it replaced Rossini’s in the repertoire.

Rossini’s librettist, presumably with the composer’s approval, followed a French dramatist’s version of the original story by Giraldo Chibthio, also Shakespeare’s prompt.  Italian translations of Shakespeare did not become available until three years after Rossini's opera premiered. Following the original story, we have Otello, Rodrigo, now a suitor, and a downplayed Iago.  Verdi fell for the wily, wicked Iago, who has to fade from his scenes at the play’s conclusion. In Rossini's Otello, Iago hovers and slinks in the background, not much of a threat.

When Rossini’s opera premiered in Naples in 1816, the composer took advantage of the abundance of high tenors in town, and created a work with roles for three of them.

At the Philadelphia Opera revival of the work, Otello is played by South African Khanyiso Gwenxane, whose lyric voice is on special display in the second act. Alex Shrader is an ominous Iago and Lawrence Brownlee is Rodrigo, the juiciest role. He wants Desdemona. Her father prefers him and Iago helps set up the false betrayal that brings down the secretly married lovers. Brownlee’s second act aria is one of the stunning treasures of this production, his voice glowing as it ranges emotions and heights.

Desdemona is central in Rossini’s opera. She is strong, a woman who breaks our hearts because we admire her courage and her inventiveness. No defective female here.

Daniela Mack, like Brownlee a favorite of Philadelphia audiences, brings the richness of Rossini’s music and the feminist characterization to the stage. She is magnificent, her voice spanning octaves, the beauty of her lines shaped by a lush dynamic. Her Willow Song, ethereal and pure, forecasts Benjamin Britten in its restraint.

Desdemona loves Otello’s story, particularly his origins in Africa.  And there is the chemistry. Her father can’t believe she’s fallen for the Moor, and works throughout to separate them. Their differences are apparent: race, world experience and class. Yet they share a heartfelt passion.

The production takes place on two tiers, joined by a wide staircase on which central action is often played out.

Corrado Rovaris conducts to bring forth the singers and to take full advantage of Rossini’s expansion of a scene. Desdemona’s bedroom rocks with thunder in the orchestra as lightning strikes outside the windows. A stately introduction of Desdemona in her father's home finds her concerned that Otello will find her unfaithful. In a beautiful duet, pure and simple, Emilia tries to comfort her.  Emilia can see the unfolding conflicts, the treachery and infidelity of the men.

Audiences note the early use of broad historical pictures in the overture. These portrayals would become integral to grand opera. Before the Senate, Otello pleas for recognition at home in Venice after his military victories. He, as an ultimate outsider, fears that his race will trump his triumphs in battle.

Moments that freeze and then explore characters’ feelings had not been used before. The quartet at the end of Act  I is one such novel and effective moment. Director Emilio Sagi highlights this moment for our pleasure. On stage, he keeps the action continuously fresh.

Had this opera been written after Guillaume Tell, it might have been a heftier work. Yet the audience seemed to share the enthusiasm of figures as diverse as Hector Berlioz, Franz Schubert, G.B. Shaw and Stendahl.