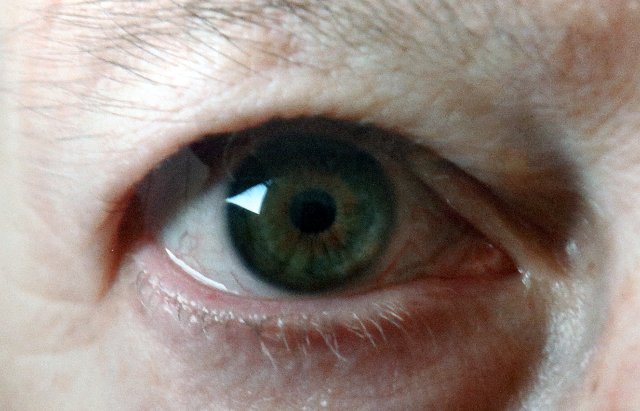 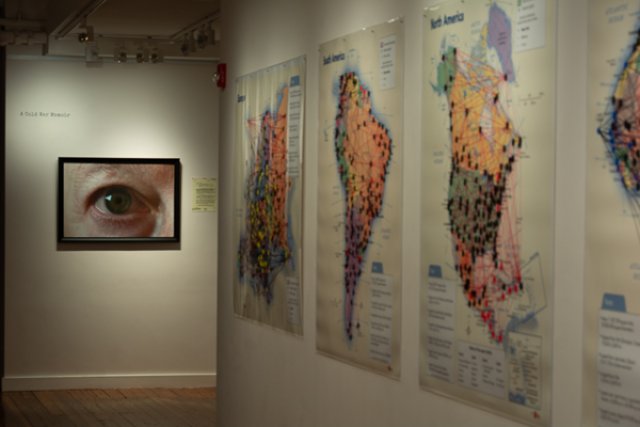 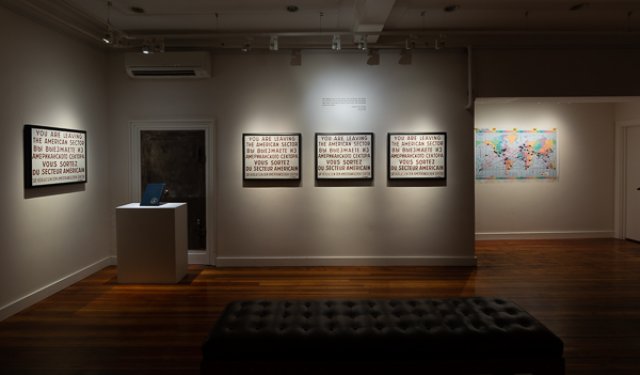 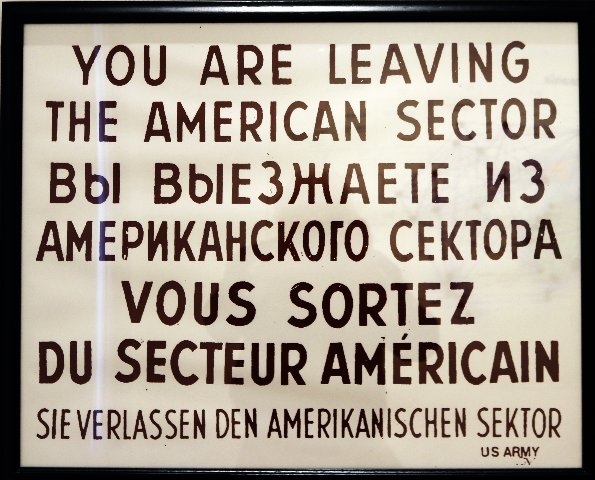 The Cold War in Berlin. 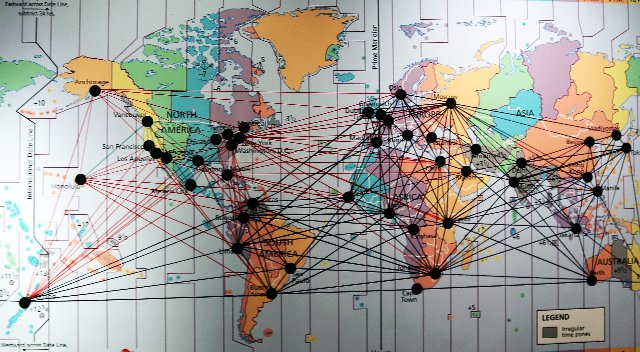 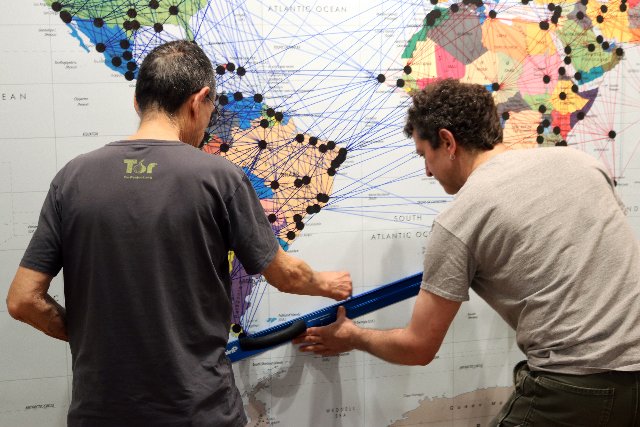 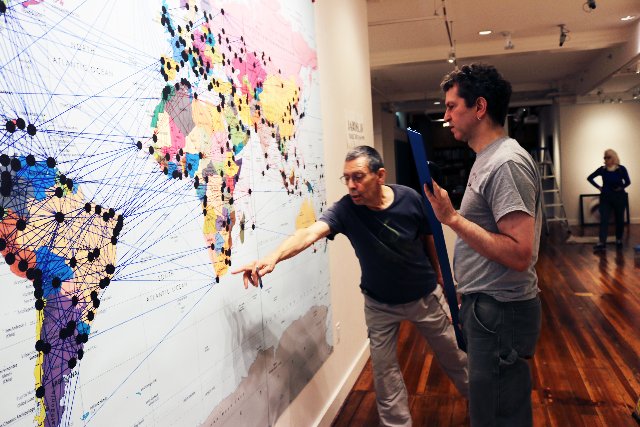 Jay points to a detail. 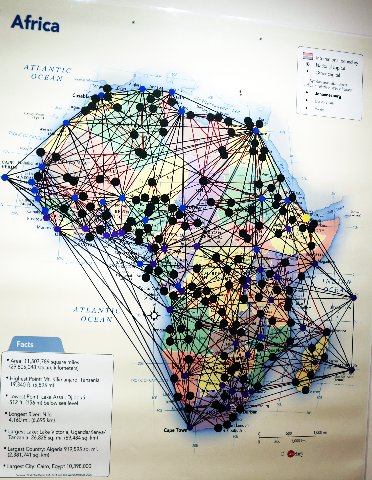 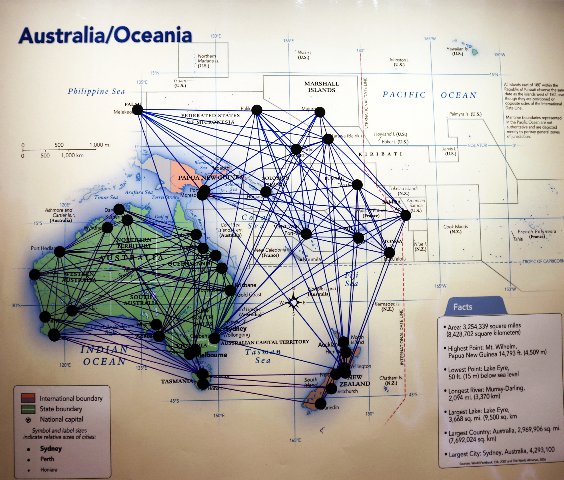 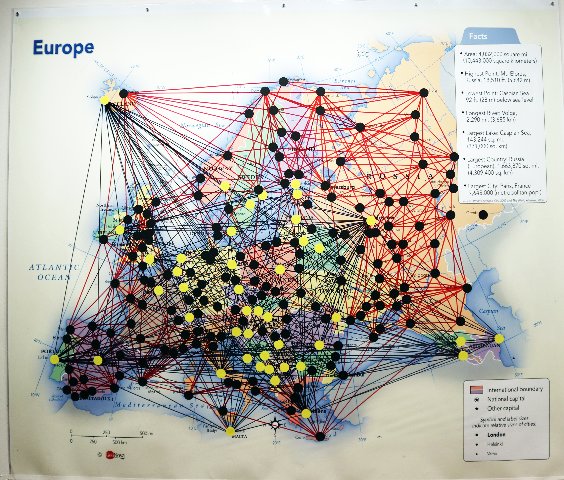 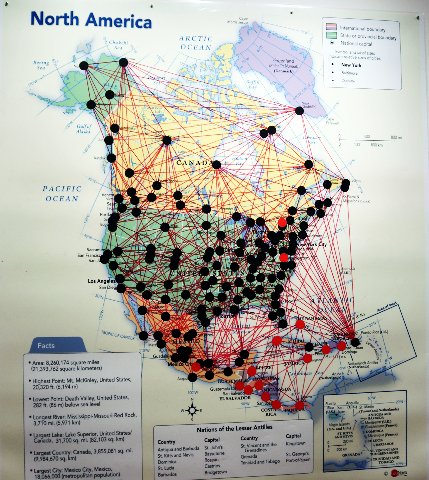 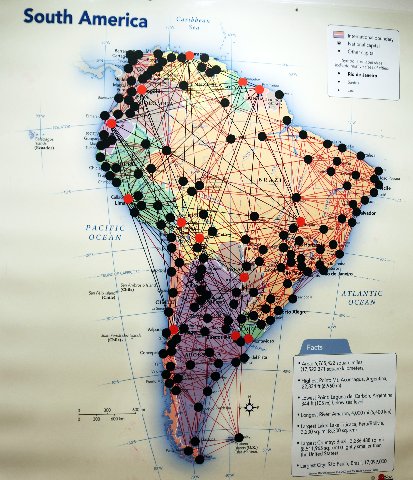 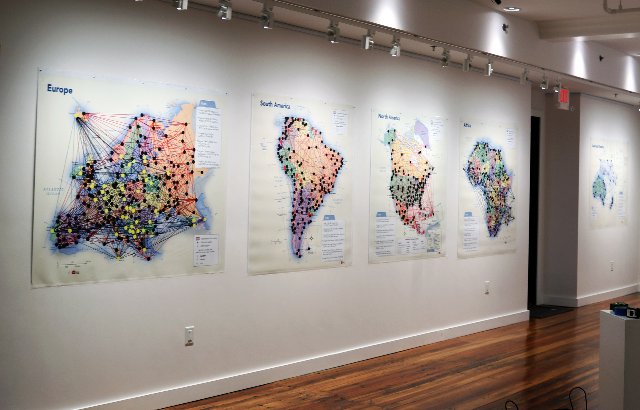 view of the installation. 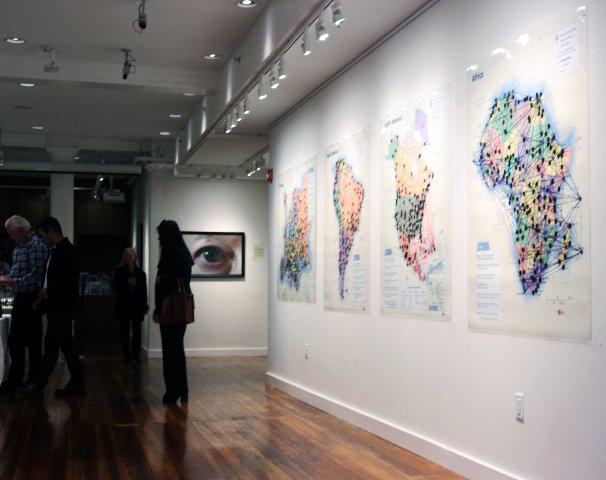 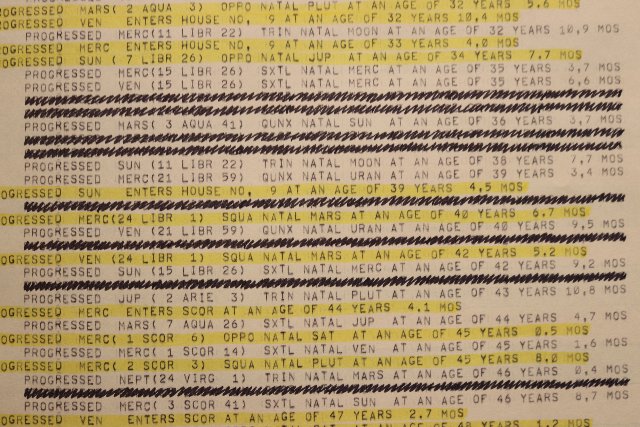 Devil is in the details. 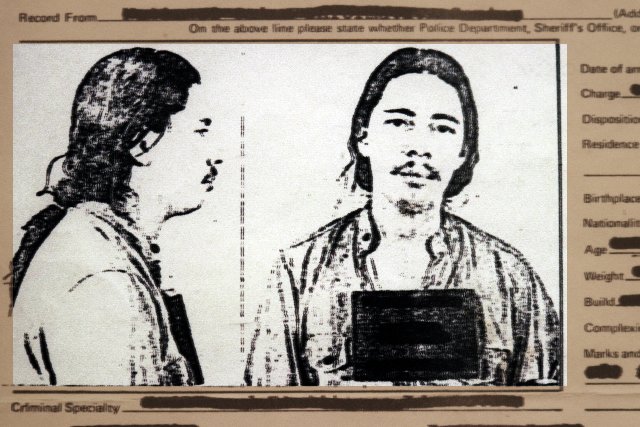 Jay in one of many covert identities. 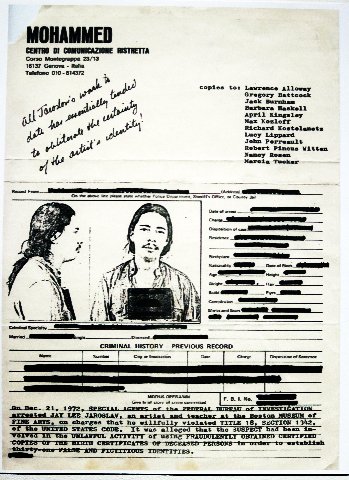 Rap sheet for an artist. 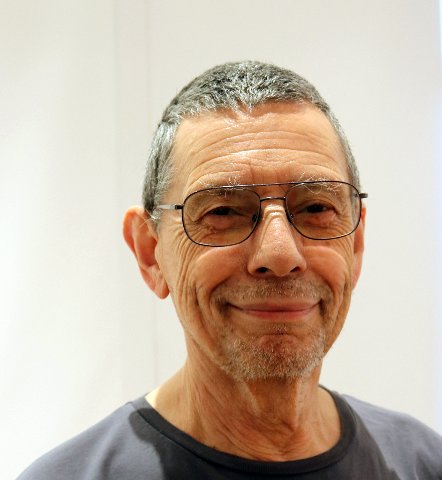 Jay today hiding in plain sight in Gloucester or all places. 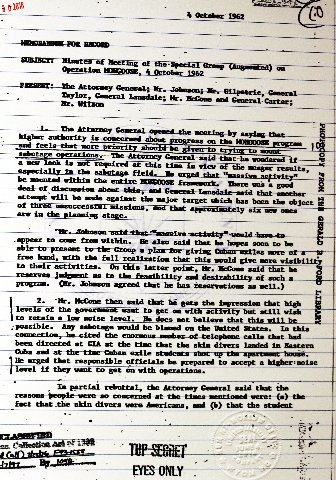 To say the least, the conceptual artist whose work is now on view at the cutting edge Trident Gallery, in of all places, Gloucester, Massachusetts, has an unusual resume.

This is his first solo show in some thirty years. I have been covering the intriguing work for at least that long.

There were 31 paintings which represented an agenda to find identities of individuals, roughly the artist’s age, who had died within a week of birth. These essential documents were used to secure social security numbers, passports, and driver’s licenses.

Researching plausible back stories these credentials, and other materials, were used for off-the-books operations with plausible deniability from CIA.

These ventures into the field, at times occurred between or even during semesters of teaching at Boston’s School of the Museum of Fine Arts.

In hindsight, during a lengthy interview with the artist, it seems that he became an artist more or less by default.

With "cops and robbers" as close friends he grew up on NYC’s mean streets. Identified with an off the charts IQ, he was “recruited” while a member of the MIT Artificial Intelligence Group (1967 to 1971), a Defense Department funded research project.

He was invited back to the MIT Artificial Intelligence Laboratory in 1994, where he became the Director of Strategic Planning and Development, and later co-founder, along with several of his friends at MIT from the sixties and seventies, of the Human Intelligence Enterprise.

In 1998, still at MIT, he was featured in the Discovery Channel’s two-hour documentary, “Robots Rising” (1998), which is currently available on YouTube under that title.

There might have been a safe and sedate career as an academic and researcher. Combining a street wise upbringing, with unique technical skills, he was recruited as an intelligence officer under “Non-Official Cover” (NOC).

Other than a case officer who, over time, became his only trusted friend and mentor, there was no other connection along the chain of command. In the event of a meltdown he was strictly on his own and subject to plausible deniability by any agency of the US government.

That meant years of living on the edge emotionally. According to Jaroslav, staying on constant alert was comparable to the rush of those who pursue extreme sports.

With unique synergy, all aspects of research and operations conflate in his conceptual approach to documents as visual art.

His interest in art began when he was a tech supporter in a project for “Elements: Fire, Water, Air and Earth” a landmark 1971 Museum of Fine Arts exhibition. Curated by Virginia Gunter, it proved to be the most progressive and influential exhibition of contemporary art mounted by the MFA at that time.

He worked with the artists Christopher Sproat and Elizabeth Clark to create “Fire Piece.”

The experience led to dialogues with conceptual artists Vito Acconci, Dennis Oppenheim, Gordon Matta-Clark, Keith Sonnier and others. Later in New York these emerging artists met in the studio of Robert Rauchenberg who was seeking inspiration for his own work.

The appropriated documents, enlarged facsimiles of which he later exhibited, led to criminal charges with multiple counts. He pleaded out but a part of the decision banned the work from being shown in the U.S. for a lengthy time frame now lapsed. Most of the works were exhibited and sold in Europe. In a prior exhibition one of them was shown at Trident Gallery.

He assumed multiple identities over more than thirty years. Now approaching his seventy-fifth birthday, having retired from the field more than twenty years ago,  Jaroslav is “hiding in plain sight.”  When we met in the gallery he told me that he hasn’t carried a weapon for many years.

The title of the exhibition : TRADECRAFT 1968–1998, refers to former service and work that he continues to develop based on that experience.

The FBI glossary defines tradecraft as "intelligence jargon for the art, methodology and know-how of conducting intelligence collection" and “specialized techniques and methods used in the organization and activity of intelligence operations.”

Given a lapse of decades the artist considered, but rejected, the notion of a retrospective. Instead, he has installed a work in progress. It is based on a company, HUMiNT-WORLDWiDE LLC, a proprietary Wyoming limited liability corporation, that he founded in June, 2018.

Since then he has established nearly one hundred “virtual offices” in at least fifty countries and territories on six continents. What he proposes to do with this project is still an open question.

The show at Trident is filled with large maps illustrating his proposed worldwide network. Over the next year it will include all existing countries and territories in the world. On each of the maps he has placed large dots, representing his “assets” and drawn complex connections between them all.

There are multiple subsets with plans to create his virtual offices. There is a focus on major loci for gathering and transmitting information through an encrypted process.

With concern I asked if there might be a knock on the door by the Feds? The answer was reassuring that everything is legal and transparent. He is doing nothing but illustrating his way of strategic and tactical thinking

Looking at maps with numerous dots and connecting lines he explained how information gathered in one location is relayed in an untraceable manner. These tools, sources and methods, are used by law enforcement, intelligence communities worldwide, journalists, and individuals to protect their identities.

There is nothing nefarious about what he is developing but he described it as a complex and very expensive project to initiate.

It took a week to install the exhibition with work continuing beyond the opening. Part of the problem was that the largest, generic, classroom map was too big to work on in the studio. It was quite a feat to install it. During my visit Jay was placing dots, and with gallerist Matt Swift, was drawing connecting lines for most of the week.

Mid week much of the work was on the floor, other than that large piece. We met after lunch and talked for some time.

Returning on Friday afternoon most of the wall maps were mounted and Jay was drawing more lines.

In a side gallery, with subdued, solemn lighting hung edge-to-edge were pages from a 1963 field manual for "extreme interrogation.”

Jaroslav obtained a declassified printout through the Freedom of Information Act. Each page has an official notarized seal. He explained that the manual is now obsolete but has been revised several times since. One shudders to consider how it reads under the current administration.

During the opening we learned that Swift’s father had been the CIA’s Chief of Station in Hanoi during the 1950s. On a table was a folder of vintage documents related to his service.

With irony Jaroslav commented that “There are a lot of former intelligence officers who live on Cape Ann.”

There was poignant discussion of the collateral damage from decades of “Hiding in Plain Sight.". That included two failed marriages before a successful union with the artist Susan Erony.

In writing this review there was no information provided by the gallery. It is usual to work from a press release and or artist statement.

All effort was focused on creating and installing the work. Explaining it will evolve with time. He told me a lot which I have yet to transcribe and unravel. During the vernissage he engaged with visitors about the work.

By email during the week after the opening I pressed him for information. It’s a complex subject which I am struggling to get right. Could he put together at least a brief artist’s statement?

He sent me this note.

“Explaining an almost seventy-five year life of ‘hiding in plain sight’, is not as easy as it may seem. The old saying ‘Keep It Simple Stupid’ may work for some people, although I doubt it will work for me. What is a ‘Tweet’? 142 characters? I’ve been more than 142 ‘characters’ in real-time. Oh well. I’ll do my best.”