Paul Cadmus Comes Out on Top 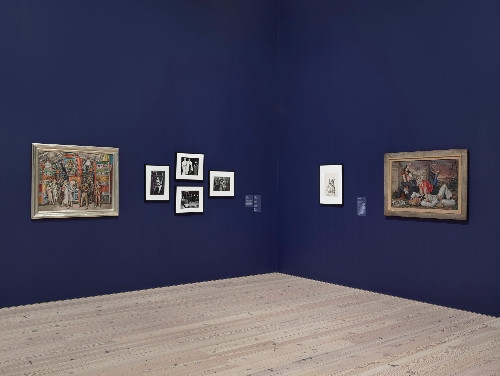 In a long career of writing about the arts, one has many unexpected, unplanned-for experiences, some disconcerting, some hurtful, some amusing. In the latter category is a conversation I overheard at the member’s desk in the “old” Whitney Museum of American Art on Madison Avenue between the artist Paul Cadmus and a young woman who dispensed tickets to both museum members and members of the press.

It was sometime in the ‘80s when the Whitney was actively promoting a new generation of New York artists, some good, most not, collectively praised for the “energy” suggested by their paintings. I was standing in line behind an elderly man with white hair and a prominent nose holding a cardboard box filled with broken crockery.

He asked to speak to a curator. It was then that I realized it was the magic realist Paul Cadmus, who raised a ruckus when he was a young man with his paintings of drunken American soldiers and sailors cavorting with women of easy virtue and sometimes each other. The young woman, probably fresh that season out of Sarah Lawrence, asked his name and purpose. He said, a little taken back, “Well, I’m Paul Cadmus and I used to be shown in this museum quite a bit. I was in almost every Painting Annual – we called them Annuals then, not Biennials – but I haven’t been included in one since this new building opened, I haven’t had a studio visit in years, and I’d like to talk to a curator.”

The young woman looked as if she were talking to a crank, but she made a call and asked him to wait a moment. He continued, “You see, the museum has forgotten about me but I have not forgotten it. I make sure I see every Biennial, and I have figured out a way to get the curators to show some of the paintings it owns by me, none of which have been on view in many years.” Then he pointed to the box of broken plates and cups. “I thought that if I were allowed to glue some of these ceramic fragments on my old canvases the curators would be interested in showing them again.” The young woman looked confused, but was saved when a young male assistant curator, bow-tied for success, rushed up and welcomed him. “Mr. Cadmus, please come with me, we would be very happy to talk with you upstairs.”

Then it was my turn to get my ticket, but I couldn’t resist putting in my own 5 cents worth. “You know,” I said to the young woman, “Paul Cadmus used to be a very famous artist. That wasn’t just some crazy man. He was making a joke.” She looked at me as if I were crazy too, so I took my ticket and went on to see whatever it was I was there to see.

The Whitney Museum has just moved to a new building downtown in what used to be the meatpacking district at the start of the High Line. It was designed by Renzo Piano, the go-to guy for American museums trying to reinvent themselves. I think it is one of his best in recent years, better than both the Harvard Art Museum and the addition to the Isabella Stewart Gardner Museum he did here in Boston where I am writing, although each of them has its virtues as well. With his new Whitney, he matches the industrial aesthetic of the High Line and the neighborhood’s former unglamorous function, while at the same time looking back to his own high-tech roots in the Centre Pompidou in Paris, which sparked the orgy of new museum building worldwide. It has a greater muscularity than any or his other recent projects.

Anyway, this is not an architecture review, but a reminiscence. Cadmus died in 1999, but I wish he had lived to see the opening exhibition in the Whitney’s new home. Titled “America Is Hard to See,” it was devoted to the permanent collection, and works not seen in decades were on view along with cherished masterpieces more regularly exhibited. There were two works by Cadmus: his terrific “Sailors and Floosies” from 1938, which depicts four drunken sailors, three with women probably more interested in lifting their wallets than making love. More surprising perhaps for those who know Cadmus only for his homoerotic magic realism is the inclusion of the 1935 drawing, “To the Lynching!” which graphically shows a black man being dragged off by murderous thugs, demonstrating the truth behind vaunted Southern gallantry.

And as for Julian Schnabel, the painter who became famous for gluing broken crockery to his canvases, there was not a single work on view.