What the Jews Believe at Berkshire Theatre Group

Written and directed by Mark Harelik 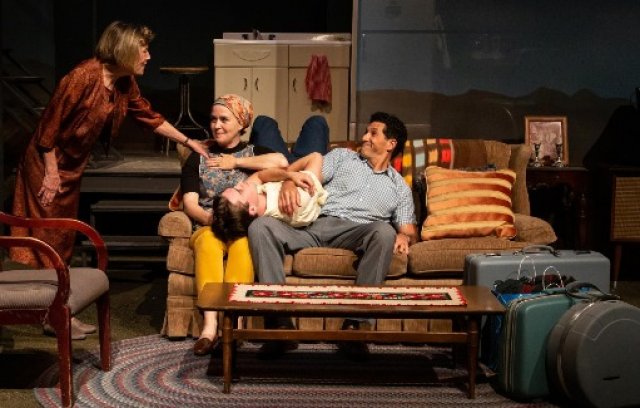 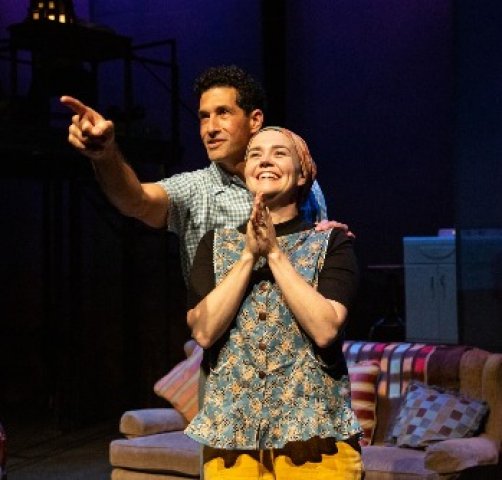 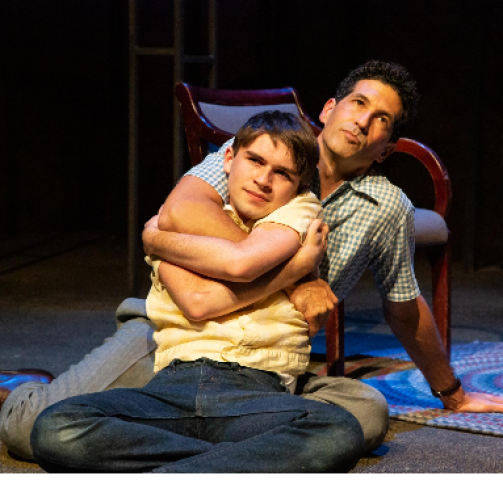 As written and directed by Mark Harelik What the Jews Believe has more questions than answers. That makes for a muddle particularly in the first act which is chaotic and multi valent. There is more focus in act two which hones in on matters of faith, illness, redemption and cruelty.

In rural Texas, Emily Donahue (Rachel), Benim Foster (Dave) and their son Logan Weibrecht (Nathan) are the only Jews in town. At twelve and a half Nathan is not making much progress learning enough Hebrew for his bar mitzvah.

The opening scene, with Nathan as character/ narrator is dominated by the child in his upper level bedroom. With endless silly jokes his character acts annoyingly younger yet looks older than the role. That leverages his climactic scene when he has evolved to be wise beyond his years.

Nathan bookends the play which starts with childish frivolity and ends by projecting the character into manhood and beyond. That’s quite a leap and faith is what falls between.

His initial joking take on Moses and the Ten Commandments seems to riff on Lord Buckley or a very young Lenny Bruce. This is a potential Borscht belt comic in embryo. Early shtick got a lot of laughs but soon subsided as the play proved to be anything but comedic.

Walking down the aisles and onto the stage Nathan’s parents have returned from California with presents. But it proves not to have been a holiday. They had gone for treatment of her now end stage cancer.

Overall they seem to be coping. With a measured performance Foster as father/ husband is providing support and attempting to hold the family together. Then there is an outburst from Rachel. From his room Nathan absorbs the familial tensions.

Leaving it to the audience to connect dots and come to conclusions Harelik drags a lot of red herring across the narrative. Tangents and possibilities are suggested but not fleshed out.

Through scenic design, light and sound much is made of the rural Texas setting. Nathan crawls out on the roof to enjoy the view. There is dramatic thunder and lighting in the opening sequence. Later when  husband and wife are outdoors there is lightning but no thunder. She asks why but there is no answer to the metaphor.

What bearing does being the only Jews in town have on the drama? It is touched on but left on the table. Like many Southern Jews in Christian/ racist communities it is a family of merchants. Dave inherited the business from his father and hopes to pass it to his son.

By not growing up in a Jewish community Dave, along with everything about the play, is ambivalent. They don’t keep kosher. Nathan, studying for his bar mitzvah, is upset to learn that he can’t have bacon with his eggs. For Dave that’s medieval mumbo jumbo but he feels strongly about his heritage and identity. It’s what he wants to pass along to his son.

At one point Rachel tears off a wig. Then later asks Aunt Sarah (Cynthia Mace) if she should cover her head? Does she wear a wig as a traditional Jewish woman? In some scenes she wears a scarf. Or is it cosmetic to conceal loss of hair through chemotherapy?

A central theme emerges in fits and starts. If she has done nothing wrong why is a righteous, all knowing and loving God afflicting her? This is a conundrum conveyed by the Book of Job. It was the prevailing question of the Holocaust.

The rabbi Robert Zuckerman (Rabbi Bindler) visits to instruct Nathan. That morphs into an intensive evocation of the Job dialectic. Here the play morphs from bathos and melodrama to high drama. Confused and demoralized the rabbi retreats from a troubled household. But there is another plot twist.

When the parents returned from California there was not further need for Aunt Sarah to look after Nate. But Rachel need help and asks her to stay.

It emerges that Sarah is a Christian Scientist. As a child she was cured of paralysis in her legs when a woman prayed with her. She prevails on Rachel that Jesus Christ is savior and healer. To trust and believe in Him means that she is not terminally ill. Rachel is filled with hope and joy. Together they will visit a Christian church and pray.

This raised questions for me. If Sarah is Rachel’s aunt was she born Jewish and then converted to Christian Science? Harelik ratchets this up to a holy war. Dave wants to support and comfort. He will even drive them to the church but not participate. He accuses Sarah of cruelty in raising false hope.

The impact on the characters and ultimately the audience is palpable and harrowing. The anguish conveyed on stage seeps into our bones. There is the dichotomy of Yaweh seemingly indifferent to suffering and disease and faith healing through Jesus. For which Kaddish is the inevitable result.

Seeking to have it both ways Harelik has given us a double ending. In the first. with the two of them trading jokes, Nathan watches her ascend a stairway to heaven. As father and son embrace in loss the now wise and mature son tells us what really happened.

An at times chaotic and uneven evening of theatre left us with much to think about.