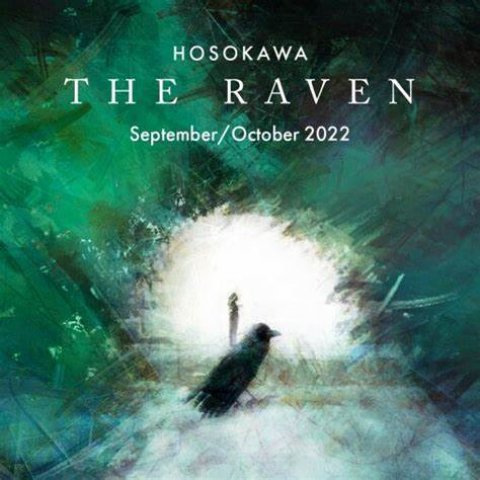 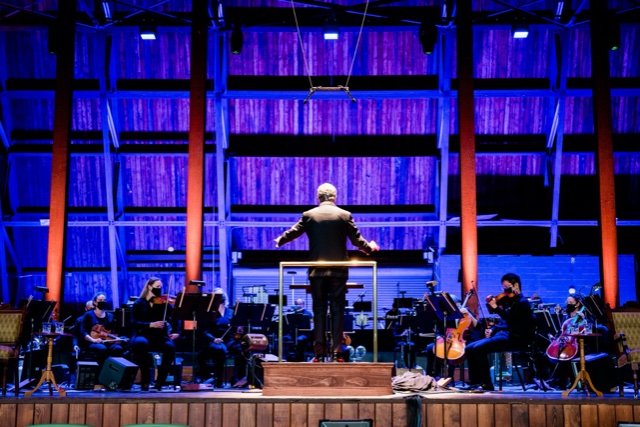 Eiki Somura conducts the Raven at the Opera Philadelphia festival. 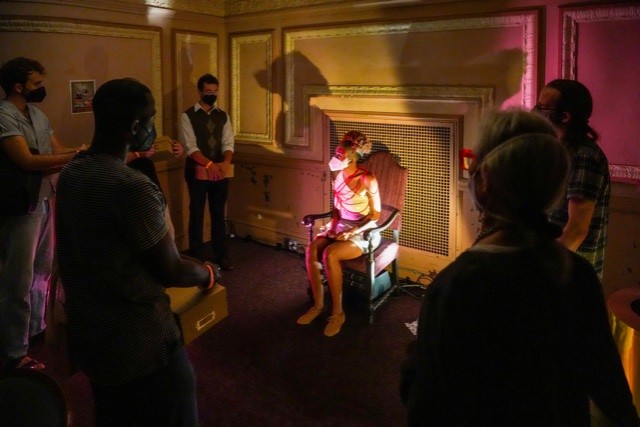 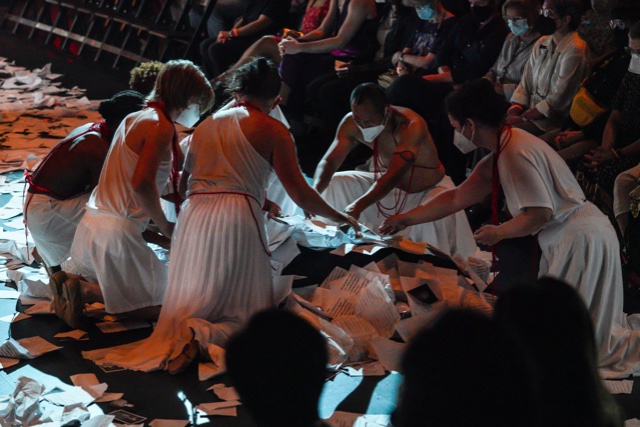 The Nelores at the beginning of Toshio Hosokawa's The Raven 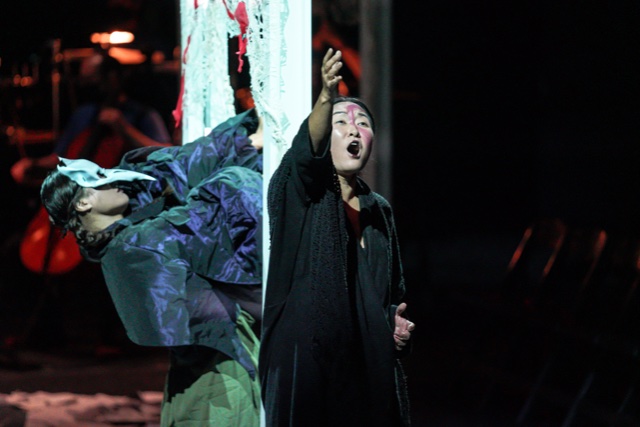 Muyu Ruba as the raven; Kristin Choi, the scholar/pot in Toshio Hosokawa's The Raven 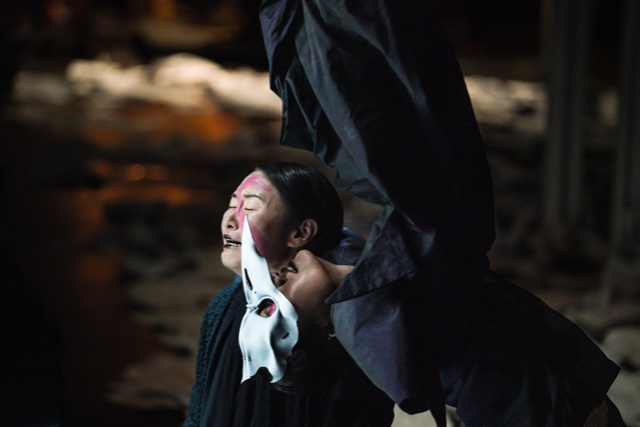 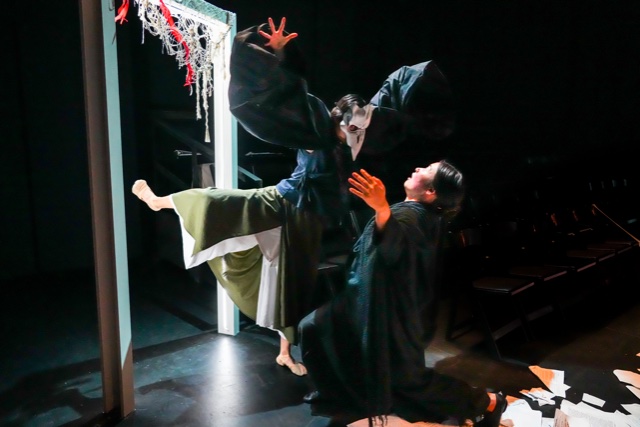 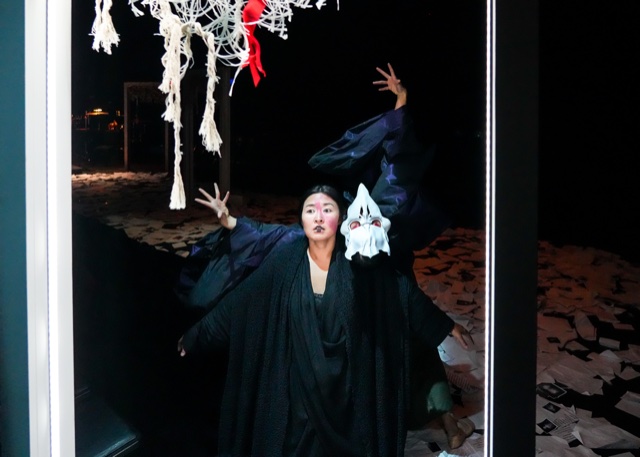 The Opera Philadelphia Festival production of The Raven opens with an interactive segment prepared by the Obvious Agency. The audience is divided into segments, each led by a Lenore (the deceased love interest of Edgar Allan Poe’s poem The Raven) for a special session. One Lenore opened drawers with surprises inside. Our Lenore was concerned with audience behavior rules. She suggested our responsibility to neighbors in the audience (not opening candy papers during the performance, and not whispering). The audience agreed with these rules but pushed back on the responsibility of an audience member for appreciation preparation.  A willing participant selected  “Mary had a Little Lamb”  to sing as his aria and may have prompted this audience to reject rules for reading the story beforehand. People laughed. It was fun.

All groups were then led onto the stage for The Raven by Toshio Hosokawa.  For Hosokawa, music is often transient: “We hear the individual notes and appreciate at the same time the process of how the notes are born and then die, a soundscape of continual becoming.” Woman, love, death, grief and their interrelations emerge.

The Raven monologue is characterized by novelties of rhyme, meter, stanza structure and  repetition.  Elements of the fantastic not common in literature before Poe wrote.

The poem is dramatic, a progression. Emotion is exaggerated and excessive. Imagery is a description of the inner state of being. An interior landscape is suggested on the stage. A dancer as the raven tries to release this state.

The Poe work is a tone poem of sensuous musicality. Words are intensified by Hosokawa and then the spectacular singer, Kristin Choi.  In Opera Philadelphia’s production at the Miller theater, we are caught up in the moment with the orchestra’s music, the singing and the dance of Muyu Ruba.  Covert content is made clear in both notes and dance gestures.  At the end Choi is dead and the raven banished. Aria Umezawa directed joining all the elements to haunting effect.

Choi captured the scholar/lover perfectly in Hosokawa’s lines. How do you hear the difference between actual and metaphysical which Poe suggests?  Pushing the voice beyond its natural limits is one suggestive placement Hosokawa has written and Choi embraces.

The bird is both of this world and can take off to another.  Choreographed by Muyu Ruba and danced by her, the bird is an extraordinary creature.  A raven can parrot as much as a parrot and so we have Nevermore. Nevermore is given voice by Choi.

The bird is also a device of self torture. The singer and dancer are often joined at the hip on stage. Yet the bird is mostly a ghostly presence, no blithe spirit,  no unity with nature. The opposite of sweetness, the raven is fantastic.

The choreography demands physical postures which also seem beyond nature and reality,  Particularly the curvature of the spine makes the dancer into a bird and no longer the real human.

In the end the narrator fails to tell the literal from the fanciful. “Bird or fiend: Take thy beak out of  my heart and take thy form off my door.  And my soul from out of the shadow that lies floating on the floor  –shall be lifted – Nevermore."

A never ending nightmare is physically tangible. Yet the raven dancing is allegorical.

Fyodor Doestevesky pointed out that because you see all the details of the raven so clearly before you, you come to believe in the bird’s existence, when it is impossible and never occurred on earth.  Poe may or may not conjure up reality, but only to convince the reader utterly of the reality.  The hallucinatory moments are the most concrete in language and as they are danced out in riveting gestures.

In classical terms, the plot is simple, a plot of recognition in which the poet, examining all the implications of the bird's "Nevermore", recognizes his doom.

At the core of the work is the bird’s mindless yet provocative repetition, Nevermore.

An opera? Yes, in Philadelphia.  Ever more.