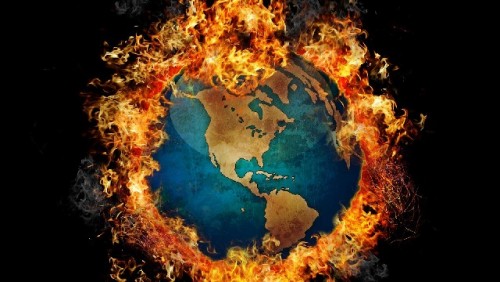 All over the world, and no matter what our meteorological future, the Autumnal Equinox will always presage cooling weather.

As well as the heating-up of political issues.  Will congressional Republicans precipitate a shutdown of the national government? On the very day when sign-up for Obamacare begins!

All of which puts the lie to the first assertion in M. D. Harmon’s piece  (“New Climate Change Report Rains on Computer Model,” 9/21, Kennebec Journal).  A “political” document would not be released on the 27th of September, as was the latest report of the UN-sponsored International Panel on Climate Change (IPCC).

Mr. Harmon: Politically sophisticated people would hold a press conference announcing that “We need to curtail fossil-fuel combustion, or we as a species are in serious trouble.” This occurs in the summer, when there’s a strong possibility that nothing else will be leading the news.

Harmon cites an “interview” with Oxford professor, and report co-lead author, Myles Allen, with his neighbor/acquaintance, David Rose, a reporter for the (notoriously arch-conservative) British paper The Mail on Sunday, to the effect that, “Global Warming is not a big deal, or matter of immediate concern.”

Allen himself in the (yes, known to be left-of-center) Guardian protests that he never uttered what The Mail quoted, either verbatim or in sense; and considered a filing with the UK’s Press Complaints Commission (PCC.)

That PCC and IPCC look unmistakably similar is coincidence; that IPCC and the newly-formed non-governmental International Panel of Climate Change (NIPCC) resemble one another, at least in abbreviation, is not.

Both the NIPCC and its parent, the Heartland Institute, are part of the burgeoning right-wing propaganda mill industry that, for example, has founded at least one state-level think tank in every American locale, e.g. The Maine Heritage Policy Center in my home state.

The Republican narrative says that ordinary Americans are voting Democratic because the Dems are fixing them up with public largesse; the reality—very wealthy people are getting cuts in tax rates, which they’re invited to use to fund media/propaganda outlets, leading to additional Republican power and additional cuts in tax rates.  So gigs in these plush offices really are created through rate cuts.  They might well be the only such jobs.

Another prominent player in the global climate denial industry, also cited in Harmon’s article, is Matt Ridley, now a columnist for The (also notoriously arch-conservative) Wall Street Journal.  His referenced piece does get into some of the climate science details, but cherry-picks available data until unlikely outcomes are presented as fact, and the very low ends of possible ranges in both temperature and CO2 level rises become ironclad certainties.

Ridley calls his overall philosophy “Rational Optimism.”  Earlier in his career, he was CEO of a bank, Northern Rock, which was bailed out to the tune of about $3 billion by UK taxpayers.  Northern’s collapse was due to very optimistic expansion of its mortgage business.  Many people have noticed irony and symmetry in the optimism Lord Ridley also brings to climate science.  “Not to worry, it won’t be that bad.”

If allowed to make any investment play I wanted, collecting profits, with losses covered by my national government, I’d be a notch more optimistic my own happy-go-lucky self.

The really dishonest part in Ridley’s WSJ piece is his implicit narrative about weather scientists’ desperate, obsessive efforts to explain the somewhat unexpected slowdown in global temperature rise that has occurred for the past several years.  For the fifteen years just prior, rises were surprisingly greater.  In neither case was this variability outside expected parameters.

Real investigators see anomalous data as opportunities.  Of course most of those will just be chances to refine protocols and methodologies; but a small group of them will actually presage new discoveries.  As someone who earned a doctorate in Zoology, Ridley knows this perfectly well.

I’ve recently been conducting an (of course informal) study of the fact that historic daily low temperatures are becoming relics of the past, due, at least in part, to increased greenhouse gasses in the atmosphere.  There’s also a phenomenon called “global dimming,” the result of ice-crystal particulates from jet exhaust, that makes sunshine two or three percent less bright than it used to be.  Both of these dynamics lessen the radiational cooling that is the basis of almost every historic daily low.  I do not become particularly concerned about my precious theory when two or three historic overnight lows are from the ‘90’s or the current new millennium, because the theory is a statistical statement about becoming, not an absolute about already being.

This “pause” in warming is the only aspect of the IPCC report that mainstream media is likely to mention in coming weeks. Ironically, it has changed the argument of the denialists (who are also nihilists with respect to environmental regulation) from, “There’s no such thing as global warming” to “It won’t be that bad.”  It’s almost like The Earth is snookering them with a slowdown to get them to admit the climate change reality, and then, when and if warming accelerates again, they’ll be up the proverbial rhetorical creek without a means of propulsion. Actually, fossil fuel industry money will always push them forward! Ever forward!

The certainties in all this are that atmospheric levels of CO2, and other greenhouse gasses, are increasing, and everyone now agrees that that is leading to a warmer world, worse storms, and droughts.  While the fact that human activities are the cause somehow remains controversial, no one disputes that a radical reduction in burning can lessen the warming tendency.  A Carbon Tax would be an astonishingly effective step in this clearly necessary direction.