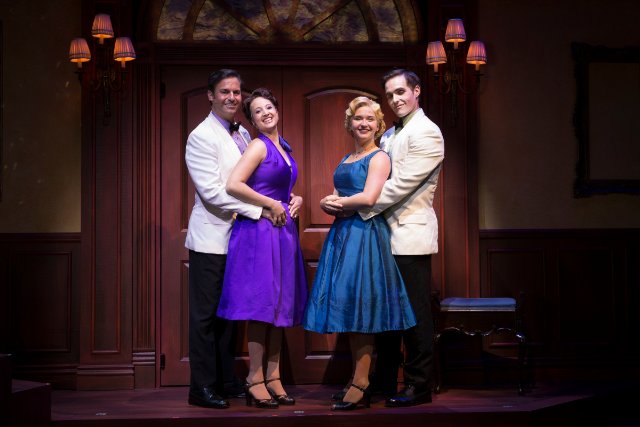 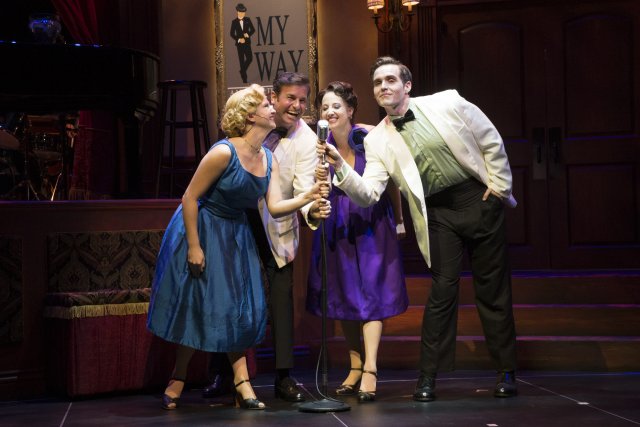 Photo by Tom Tracy The two couples lean in to sing together. Pictured from left are Laura Plyler, Mark Sanders, Hannah Richter and Clay Cartland. 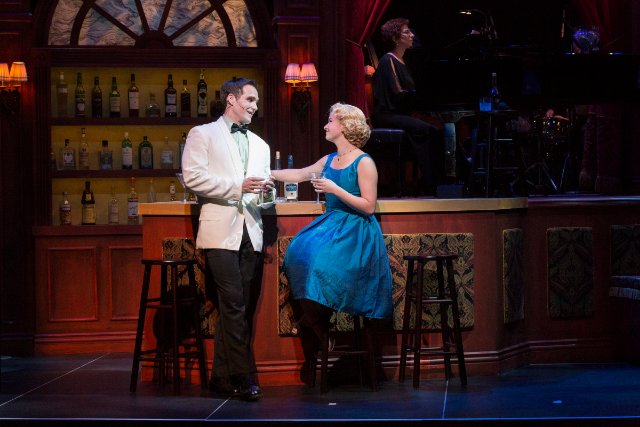 Photo by Tom Tracy Clay Carland and Laura Plyler, as one of two couples, appear in MNM Theatre Company's production of My Way: A Musical Tribute to Frank Sinatra.

“You can’t find a Frank Sinatra impersonator and who would want to?”

MNM Theatre Company producing artistic director and CEO Marcie Gorman spoke these words before a recent performance of the South Florida company’s solid and sophisticated, if not always super mounting of My Way: A Musical Tribute to Frank Sinatra.

Indeed, you won’t find an “Ol’ Blue Eyes” tribute artist or impersonator in this production of the musical revue. It runs through Oct. 14.

What you will find, for the most part, is this -- an emotionally-honest, moving and lavish, if a bit too long love letter to one of the 20th century’s most successful entertainers.

If you’re the type of Sinatra aficionado who wants to hear music exactly as he sang it, signatures, pronunciations and all, you might walk away disappointed. However, if you’re a huge Sinatra fan who loves to hear super-talented performers sing the songs which made him famous, you’ll probably be delighted.

Even if you love moving, quality music, you’ll find something to stir your soul in this show. It features 56 popular songs out of the huge amount of music he sung and recorded during his long and illustrious career.

Fortunately, the show’s creators, David Grapes and Todd Olson, have refrained from making this show merely a chronological concert. Rather, the songs logically follow each other thematically. In addition, Grapes and Olson have grouped them into thematic medleys, which makes sense. That’s because Sinatra sang music covering a vast array of topics, including places, seasons, emotions and romance.

While most of the content features singing, swaying and light dancing, the quartet of performers throw in some Sinatra anecdotes.

And so, the result is an evening of reminiscing, perhaps singing along and even interacting with the performers. Within the intimate Rinker Playhouse at the Kravis Center for the Performing Arts in West Palm Beach, such actor-audience interaction works well.

There’s plenty of intimacy between the two couples who comprise the cast. That’s especially true during the songs comprising the “Love and Marriage” and “Moon” medley. Often, the couples sway gently while holding hands or lean in close. This convinces us that the four actors are two actual couples.

Since Sinatra often sang about love and marriage, this is significant. Of course, the actual song “Love and Marriage” is included, as is many Sinatra favorites. That that includes the title song, “My Way.

Sinatra faced ups and downs during his career and the songs in this show reflect that. However, in the end, it’s obvious he was content with his life. He expresses this through the title song, which the four performers sing with serenity.

The multi-threat performers are Clay Cartland, Laura Plyler, Hannah Richter and Mark Sanders. All possess strong, expressive and delightful voices. In addition, they appear natural on the stage, whether they’re singing, swaying or speaking. Although some are over the top at times, they sincerely convey the emotion behind the songs, punctuating the lyrics with appropriate hand gestures.

Cast members are equally strong whether they’re singing individually, or creating rich harmonies as an ensemble. Meanwhile, a three-piece band, led by and including conductor/pianist Caryl Fantel, produces a varied and pleasing sound without overpowering the singers. In all, the musicians nicely complement the performers.

In this production, strong numbers include a shining star-quality turn by Richter as she sings Cole Porter’s “I Get a Kick out of You.” Specifically, she injects verve and confidence into her rendition.

As many know, the song is included in the musical Anything Goes, about mischief aboard a luxury liner.

Speaking of journeys, this revue takes us on one.

For instance, we experience Paris, through Cole Porter’s “I Love Paris,” which Plyler gently sings. Meanwhile, Cartland sparkles with an invigorating “Chicago,” by Fred Fisher. And the company makes us long for the Big Apple with the yearning “New York, New York,” by John Kander and Fred Ebb.

Heck, we even go to the moon. And what a romantic trip it is! Light shadows circulating around the audience at one point during the “Moon Medley.”

To his credit, lighting designer Jose Santiago employs soft and brighter lighting. Both enhance a song’s mood. He also accomplishes this through his use of appropriate colors. Of course, that includes blue.

Cindi Taylor’s elegant scenic design, complete with a shiny black piano, bar setting and stately chandeliers, brings to mind the nightclubs Sinatra liked and his preferred description of himself as a “Saloon Singer.”

Credit director Dom Ruggiero for his varied staging and ensuring that all production’s elements reflect the upscale atmosphere.

Indeed, it’s an aura that will whisk you away from today’s too-often red-hot and heated bickering.

For a couple hours, you’ll enter the invigorating, heartfelt and opulent world of Ol’ Blue Eyes.

My Way: A Musical Tribute to Frank Sinatra continues through Oct. 14 at the Rinker Playhouse within the Ramond F. Kravis Center for the Performing Arts, 701 Okeechobee Blvd. in West Palm Beach. Showtimes are 7:30 p.m. Thursday through Saturday, as well as 1:30 p.m. Saturday and Sunday. Tickets are $55. For more information or to buy tickets, visit www.kravis.org/events/myway.