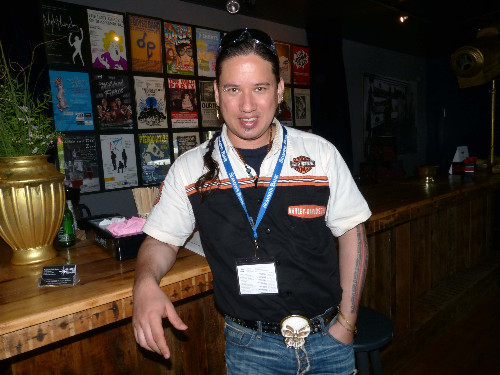 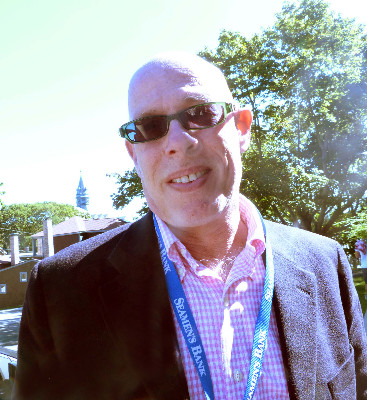 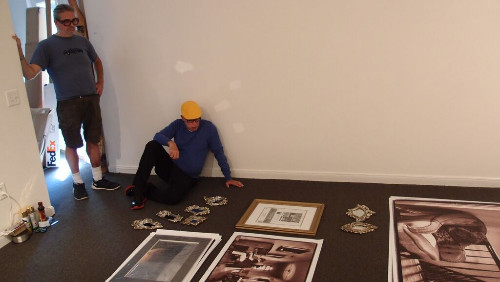 Kaplan working on the Berta Walker installation. All images courtesy of an copyright Ride Hamilton. 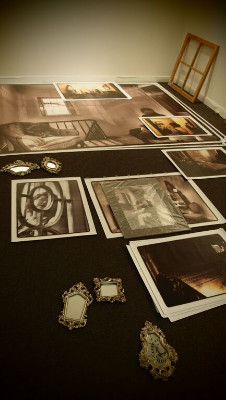 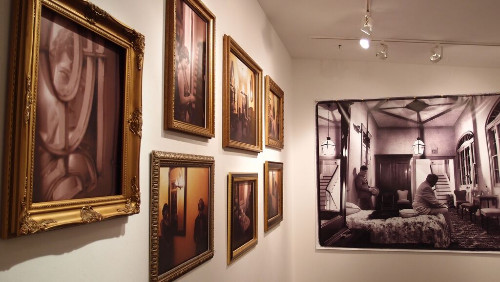 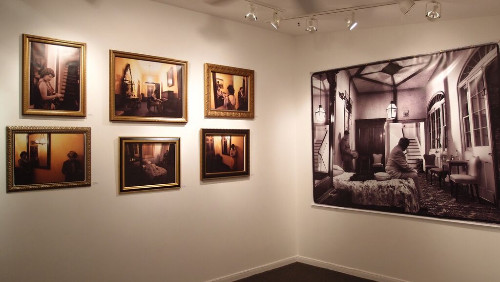 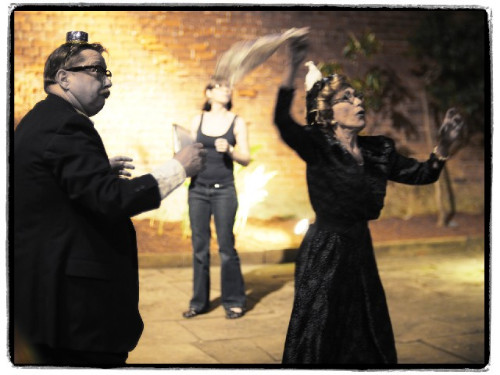 Images from The Hotel Plays in New Orleans. 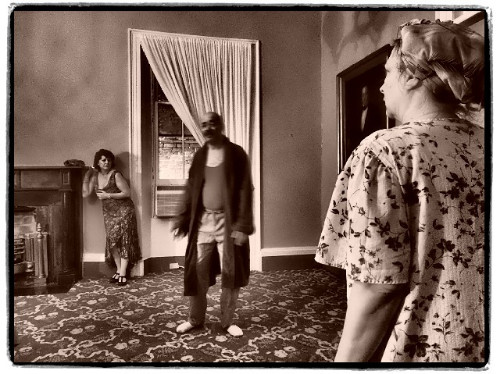 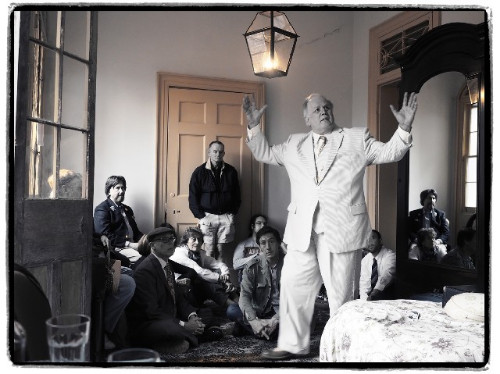 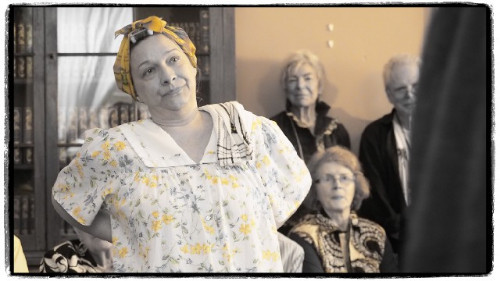 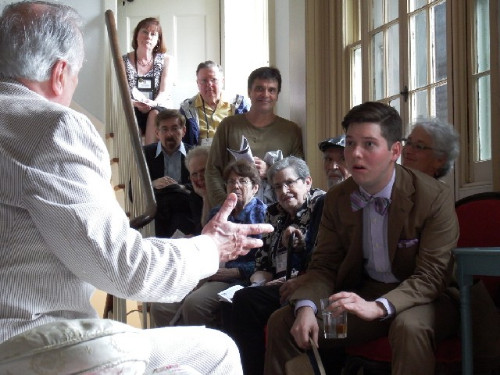 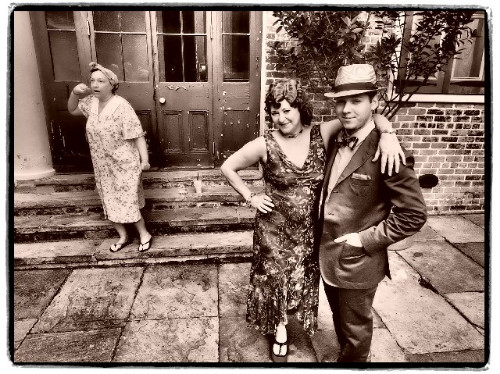 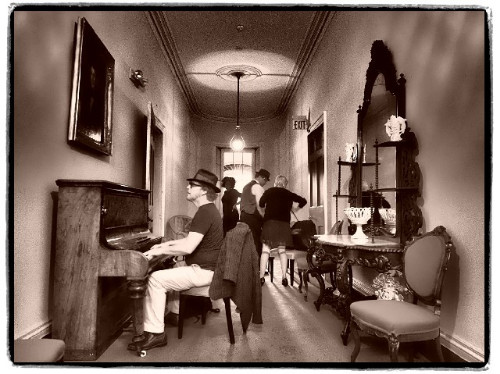 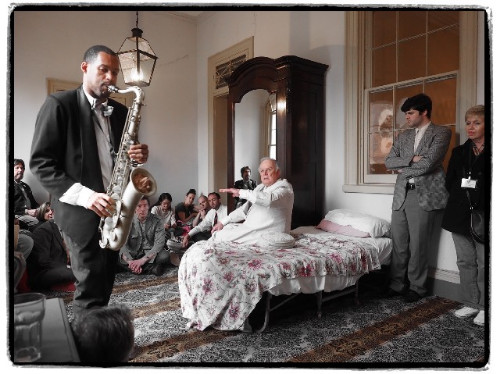 The norm is for theatre companies to provide production stills to the media. In general, they are shot during tech rehearsals when the action stops and is staged for the camera.

The quality of these images ranges from snapshots created by a member of the staff, to high quality images, provided by professionals who specialize in shooting for theatre companies.

Rarely does this work reach the level of fine art.

The intention is to record and document the performance. The photographer is best regarded as a technician providing a service.

The work of the New Orleans based photographer, Ride Hamilton, is a rare example of utilitarian imagery treated with the sensitivity, insight and unique qualities that richly deserve the installation and exhibition currently on view at the Berta Walker Gallery in Provincetown.

The theme of the small exhibition is inspired by images Hamilton created for the absorbing and unique setting of The Hotel Plays by Tennessee Williams.

The vignettes by Williams were presented in the Hermann-Grima House a vintage mansion in the French Quarter of New Orleans. They were directed by David Kaplan, the curator of the Provincetown Tennessee Williams Festival. He has collaborated with Hamilton on this gallery project.

Last April, we were among the group of four that shuttled between the rooms of the house for those remarkable performances. It was intended that there would also be action in the courtyard, including a traditional jazz band, but inclement weather forced us inside.

With the audience jammed into those small, atmospheric rooms we were inches from and surrounded by the actors. It created a remarkable sense of intimacy as the characters got under our skin and seeped into our human essence. Rarely have we had a more remarkable experience of theatre.

That sense of the site specific was further enhanced during our week of attending the festival in Provincetown. We enjoyed performances in a variety of locations including a beach on a bright, hot, end of season day as well as on the deck of the Boatslip with its panoramic view of the harbor.

While packed into those rooms in New Orleans we first encountered Ride who was busy photographing. We interacted and I was pleased when he offered access to his images with the one stipulation that he receive photo credit. I used the wonderful work for a poem inspired by The Hotel Plays.

Given his long braided hair, colorful exotic attire, including a skull for a belt buckle, and lots of fringe it was an easy assumption that he has Native American heritage. Born in 1976, his mother is a renowned potter, Dora Tse-pe, a Tewa Native American born on the Zia Pueblo in 1939. Most of Ride’s family, well known as ceramic artists, reside on the San Ildefonso Pueblo. He is also of French descent.

Initially, he was a painter as well as musician and composer who gradually was drawn to the idea of creating non traditional, transformative photography. Taking the image is generally followed by alterations using Photoshop. In some images the color is removed and then areas or objects are “painted” to spring out at the viewer. Instead of clean, sharp borders the images often have irregular black edges which set them off from the straight photography of standard production stills.

In an artist’s statement he describes his approach.

“None of my image are standard photos you’d see in Playbill. I don’t do ads. I capture art with art. Many of my photos are not just on-stage; but back-stage, off-stage, in a hallway, on a staircase – while actors are still in costume and character, but are on their downtime, or waiting to go on, or still rehearsing. Even when the play has paused, I capture the life of the character that goes on between scenes. Moments that have no large audience, but only my hunting eyes and my one lens. Because how a person truly lives, is often those secrets between the public scenes of their lives. I like secrets. Secrets are like a doctor peering into a patient’s body…

“I have taken away color. Maybe left one or two. To explain a sort of active decay. While we are living, we decay. Our hopes decay, Our love decays. Our veneers decay. From that, life grows. I leave what is essential. The rest is ephemeral.”

For the past decade he has been the official photographer of the New Orleans based Williams events. In that time he has created a staggering number of images. Given access to the files there are overwhelming options.

In some cases there is frustration. I might have preferred an overall view of the stage and its set. But that is not of interest to him. Instead there are tight shots of the performers like a heat seeking missile honing in on the fission of that experience. You also get an uncanny sense of how he is or not responding to what he is seeing. The lens, in that sense, functions as a critic. It reveals the chemistry and temperature of what is being staged.

Often his critical assessments with the camera are remarkably in sync with mine. I get a sense of what intrigues or bores him.

In The Hotel Plays through the images he recorded, truly stunning in and of themselves, we see Ride at his very best. Locked and loaded.