Douglas Lackey Play at Theater for the New City 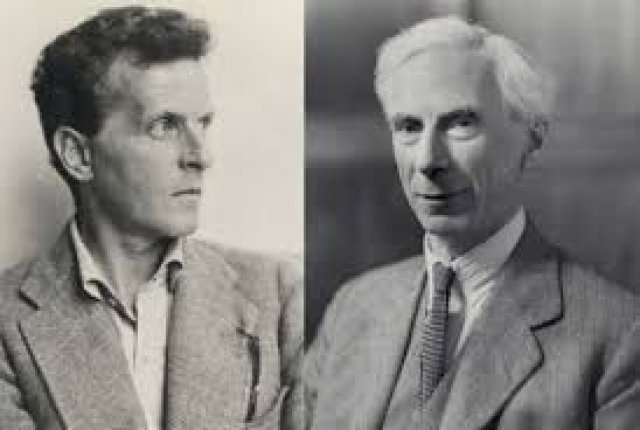 Ludwig and Bertie at Theater for the New City

Lackey is a master at bringing philosophy out of the dusty corners of academia and putting them on a very passion filled center stage. As with his previous works produced at Theater for a New City Daylight Precision (2014) and Arendt/ Heidegger; a love story (2018) Ludwig and Bertie is a victory for smart theater. Exploring the personal and philosophical relationship of Ludwig Wittgenstein and Bertrand Russell the play is both amusing and meaningful. The Production manager, Courtney Fenwick brings together a good piece of theater.

The set effectively utilizes rolling blackboards to create both the academic atmosphere and as stage dividers. The scenes are short, and bring quick though minimalist changes which serve to move the action forward. There is a motility in both scenes and costumes to give us an on-going sense of time and place. The stage manager, Ericka Lee Conklin, assisted by Jay Issacs, set and projection designer Jon DeGaetano, and the lightening by Alexander Bartieneff work together to create an interesting and meaningful staging. The costume design by Anthony Paul-Cavaretta provided the correct amount of veracity without being overwhelming.

Stan Buturla as Bertrand Russel conveys both Russel as leading moral analytic philosopher of his time, and as the very human friend and father figure to Wittgenstein. Connor Bond as Ludwig Wittgenstein maintains the energy of both his pursuit of truth, and his own despondent interior world. Harrington's direction creates a smooth use of the five minor players as they inhabit the multiple supporting roles. The youngest player, Hayden Bercy, as the pre-adolescent Wittgenstein and ensemble, has presence. Pat Dwyer as Moore carries both humor and gravitas. The female roles of both Lady Ottoline Morrell, Russell's love, and Greta Stonborough, Ludwig's sister, are character sketches painted deftly by Alyssa Simon's performance. Michael Bradley, completes this versatile ensemble.

Music played an important role in Wittgenstein's life. He was known to be able to whistle long pieces of Brahms, who had been a friend of the Wittgenstein family and a frequent guest in their home. His brother was a classical pianist of some note. Music plays its role in the drama. Its presence gives us a sense of both mood and time.

Lackey asks us to understand Wittgenstein as a person, as Russell himself did. He asks that we see behind his rather convoluted logic. It finds its way out of moral dilemma through the objurgation of reality outside of our named perceptions , and embrace the purity of his quest. The man, Ludwig Wittgenstein was the child of an extremely wealthy and sophisticated Viennese Jewish family. They had converted to Catholicism several generations before his. He was intensely religious, and a fervent patriot. But despite the elegance and opulence, two of his brothers committed suicide. He was tortured by self loathing and suicidal thoughts all his life. David Pinsent as Daniel Yalullo as Wittgenstein's lover, fellow philosopher and only personal friend, gives us a poignant reflection on the depth Ludwig's loneliness.

We are asked to wonder whether the truth of both his Jewishness, and the fragility of wealth and position are the underlying fault-lines in his character. Wittgenstein is a product of his time in this respect. The horror of the Nazi occupation of Austria threatens the lives of his remaining family. He is forced to see things as they are perceived in the eyes of others. Reality impinges gruesomely upon his ability to name it. It has become an objective truth.