An Octoroon Near Miami 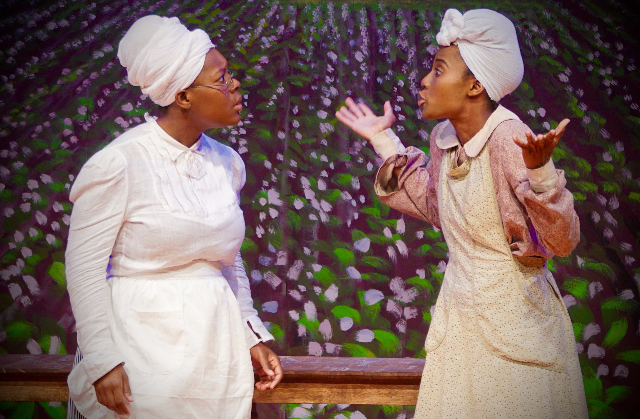 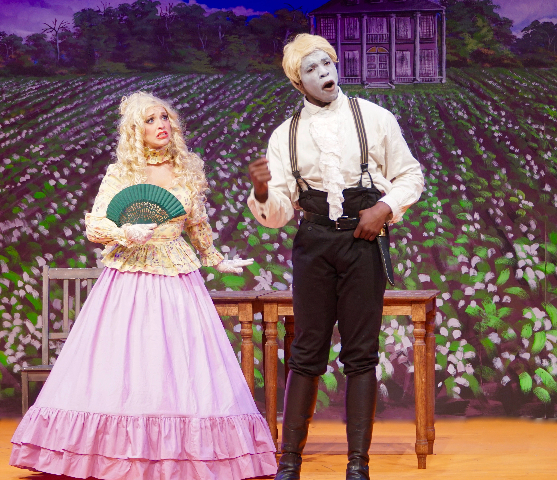 “If anything, the theatre is no longer a place of novelty,” says a character in Branden Jacobs-Jenkins An Octoroon. “The fact is, we can more or less experience anything nowadays.”

The above quote could easily refer to the play itself.

If ever there were a time to stage An Octoroon, it’s now – when the country’s racial relations are not as bad as before the Civil Rights Act of 1964. But in Jacobs-Jenkins’ eye- and ear-opening, awakening satire that is enjoying a wonderful South Florida premiere production at Coral Gables’ Area Stage Company, we’re asked to ponder the unthinkable: Could…the practice of lynching and other pre-Civil Rights era practices return?

Area Stage, an award-winning, long-standing company which doesn’t shy away from challenging, thought-provoking material, is staging this Brechtian satire through Oct. 8.

There’s nearly no attempt to create the illusion that audience members are watching a real world unfold on-stage, with characters fully inhabiting their parts, unaware of the audience. Actors address us, some enter from the audience seating area, and one sits among us for a brief time.

In true Brechtian fashion, we’re completely aware that we’re watching a performance. Brecht, a late German playwright, poet and director, wanted to distance audiences from the theatrical illusion to force reflection.  Jacobs-Jenkins has similar goals. He forces us to ponder, for example, whether we contributed in any way to today’s hostile racial environment – and how we might have behaved had we lived during the time of slavery.

One scene features a slave auction. The auctioneer faces us, as though we’re participating in the bidding to buy the slave characters for sale. It’s chilling to think that we’d even consider bidding, but again, the play makes us look deeply inward. At another point, a character asks us whether someone should be lynched for allegedly committing murder. It all makes us seem complicit in creating an environment allowing savagery to exist.

The setup behind An Octoroon demonstrates the fearlessness and talent of Jacobs-Jenkins. Again, it’s quite complicated and some may feel convoluted.

The character of “BJJ,” an alter ego of Jacobs-Jenkins, is fed up with racial stereotypes and assumptions.

“Hi everyone,” he greets us as though he just met us on the street. To dispense with the theatrical illusion, there’s no introductory announcement such as “silence your cellphones,” etc. BJJ, out of the blue, just greets us.

He continues: “I’m a ‘black playwright’. I don’t know exactly what that means.”

The subtext: Why should people refer to “black theater” and “black playwrights?” Is there a genre titled “white theater?”

In his frustration, BJJ decides to adapt in satiric, biting fashion 19th century playwright Dion Boucicault’s melodramatic play The Octoroon. Boucicault’s work concerns a bankrupt Louisiana plantation, an evil overseer, forbidden love, an Octoroon (a person who is 1/8th black), a murder and written correspondence that could free the Octoroon, named Zoe.

An obstacle facing BJJ in adapting The Octoroon is that he couldn’t find enough white actors (“they all felt it was too melodramatic”) and perhaps they didn’t want to play unapologetic racists, he suggests.

But the ever-resourceful, irritated, outspoken and sarcastic BJJ isn’t hindered. He decides to play the white characters in “White Face,” applying white make-up just as he speaks to us. The other two characters include the evil overseer M’Closky and George, who has just inherited the plantation from his recently-deceased uncle.

To further complicate matters, in walks a character called only “Playwright,” whom we soon learn is Boucicault. He dons red make-up to play an Indian named Wahnotee in Redface. “Playwright” portrays not only Boucicault and Wahnotee, but an auctioneer named Lafourche – also in Redface (the auctioneer spent too much time in the sun, hence his red face).

Meanwhile, Playwright/Boucicault has an assistant referred to merely as “Assistant.” He performs triple duty as that character as well as the slave Pete and a slave boy named Paul, the murder victim. “Assistant,” in direct contrast to BJJ, is played by a white actor who applies black make-up to portray Pete and Paul in Blackface.

BJJ’s initial failed attempt to adapt The Octoroon, due to white actors not returning his calls, results in An Octoroon. BJJ leaves the majority of Boucicault’s play intact while adding a modern sensibility to the proceedings.

Jacobs-Jenkins offers a few visual surprises and overt theatricality, complete with live music that enhances tension and other nicely establishes other moods (Stephanie Jaimes playsthe cello and Rick Kaydas wrote the original music and plays the piano).

An Octoroon often feels like a minstrel show or even a children’s show; the character of BR’ER Rabbit is based on folklore from 19th Century Plantation slaves. Different animals assumed traits of individuals within the plantation setting. BR’ER Rabbit, described by storytellers as smart, tricky and clever, appears in full costume (a sneaky Kenya Anthony-Moore.)

But for all the over-the-top playfulness and melodrama, some terms and sights will not only cause you to gasp, but perhaps scream or cry. There’s at least one projection slide that remains up for a good minute. It’s almost unbearable to look at (parental guidance is strongly advised).

Jacobs-Jenkins, however, isn’t out to merely shock and disturb you for its sake. He’s trying to use the visual and spoken-word equivalent of capital, bold-faced, large-type letters to force us to think. Needless to say, given the play’s topics, there’s much to think about.

Under John Rodaz’ insightful and detailed direction, the cast is in top form. They skillfully play over-the-top theatricality while also finding nuance and sensitivity in their roles. Some of the actors play multiple roles and transition seamlessly in and out of them, creating different, believable people.

Robert Richards Jr. is superb in the roles of BJJ, George and M’Closky. He creates a charismatic BJJ, whose sarcasm and frustration practically drips from his face and mouth.

Meanwhile, Richards imbues George with a good-natured, honorable aura. His George is a slave master, sure, but hardly of the vicious ilk. As M’Closky, Richards speaks in a harsh, scratchy voice, investing the character with sinister glee and making it easy to hate him.

At times, George and M’Closky appear in the same scene. By simply turning from one side to another and changing the posture and tone of his voice, Richards manages to convince us there are two completely opposite people in the room. It’s a tour-de-force effort and it’s fun to watch, especially when the two are fighting.

Seth Crawford, clad in black face with a bushy beard and hair, excels as the slave Pete. Crawford creates a fast-talking, excitable, over-the-top character obviously meant to highlight a stereotype the playwright wants us to avoid.

Gil Kaufman nails the role of Wahnotee in a stereotypical portrayal of the Native American as uncivilized and hooting.

Amanda Tavarez invests Octoroon Zoe with a positive spirit and a touching vulnerability, making her a relatable character who is easy to pull for.

Mallory Newbrough endows privileged, aristocratic Dora with southern gentility, sensuality and a sense of living a comfortable life. But to Newbrough’s credit, she also imbues Dora with sensitivity and humanity.

Just as contrasts exist between the performances, variation is apparent in Giancarlo Rodaz’ and Jorge Felix Rodriguez’ set. A gorgeous backdrop of a serene, green landscape and plantation house, complete with white cotton contrasts with the grim, situation facing the inhabitants of the plantation.

The contrasts in the production can symbolize the differences between human beings, suggesting we celebrate variety and do away with stereotypes.

Jacobs-Jenkins, with his piercing wit, boldness, insight and poetic writing, proves why he’s one of the best young playwrights. His talent and the fact he’s likely to write for the theater for decades to come bodes well for the future of the art form.

With An Octoroon, Jacobs-Jenkins uses Brecht’s “alienation effect” to provoke us and force us to think.

Ironically, by using Brecht’s distancing technique, he can potentially bring us together as a community to brainstorm ways to unite all peoples of all lands.

Now that’s where the power of live theater can work wonders.