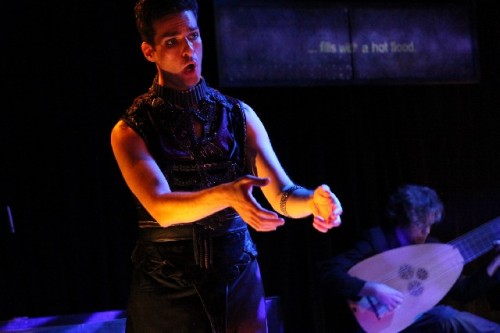 Michael Kelly gives his all. 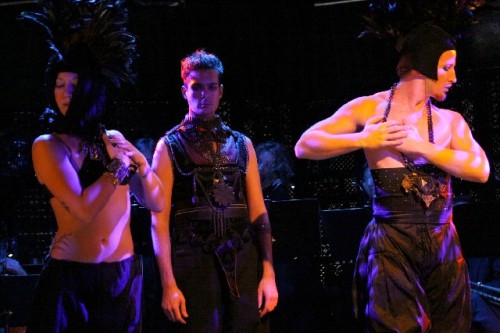 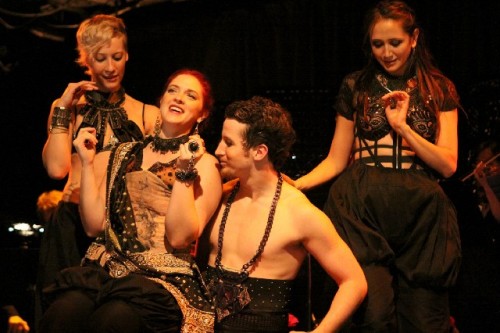 Cultures like the Armenian sit on the fault line between East and West.  This interface was played twice by the skillful Nina Stern on the recorder and the chalumeau. Actually she played five different instruments in the course of the evening, her melodic lines from traditional Armenian songs floating across the room.

Neal Goren, who heads the Gotham Chamber Opera, set pieces cheek to cheek that you would hardly have expected to fit seamlessly.  Surely when Zachary Altman, whose baritone is unusually constant and even, and yet ineffably moving, sang a Schumann song from Mrythen, only its beauty stood out.

Juicy red flowers and black torches filled the stage.  Although black and red were the predominant colors, they were interrupted from time to time by greys and yellows.  In a world premier of a percussion piece by John Hadfield, a member of Company XIV, Marisol Cabera, a dancer from Company XXIV brought a different take to the flamenco.  Instead of announcing, "I'm here. Come and get me," she offered herself up and seduced by suggestion.

Over the years, Goren has brought us seldom heard pieces but also new performers to whom attention should be paid. Naomi O'Connell enchanted as a last minute sub this evening.  All the singers not only had extraordinary vocal instruments, but stage presence that would wow Broadway audiences.

Kelly and Altman in a Monteverdi madrigal showed just how drama and musicality can be combined in two distinctive baritone voices achieving an unrivaled harmony in the male duet. Michael Kelly's expressive face and hand movements enhanced the pleasure of listening to him.

Hoglund joined Kelly in scenes from his stunning opera Il Combattamento di Tancredi e Clorinda. This exciting piece introduced the sounds of nature into music and also pizzicato.  Bridget Kibbey of Maya plucked her harp to a perfection Monetverdi never got out of his musicians. Rapid reiteration of single notes in strict rhythms were articulated by Kelly with grace.   The opera's intense emotionality intensity and powerful theatricality set up the singers and dancers for a display of martial prowess and attraction.

In 2014 the GCO Tancredi will be performed in the Bloomberg daughter's armor room at the Metropolitan Museum, where East has always met West in Samurai and Knights.