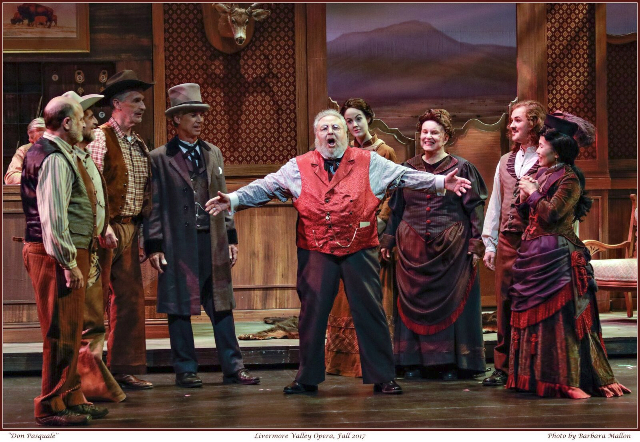 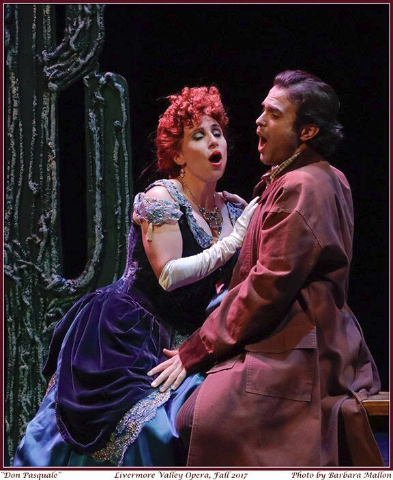 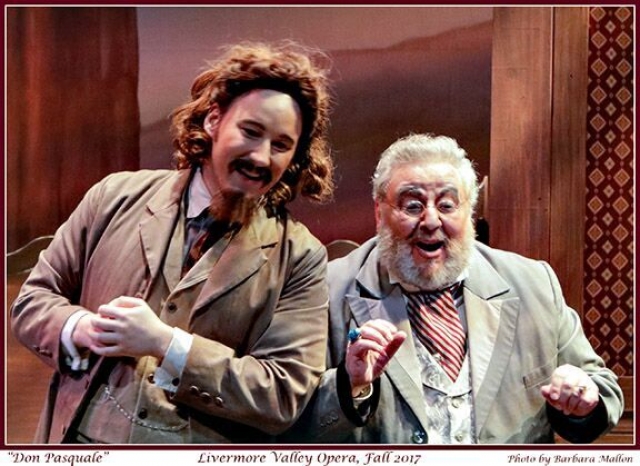 “There’s no fool like an old fool,” traditional proverb.

Gaetano Donizetti’s Don Pasquale has only three things going for it – a sparkling score; a charming story of young love and old foolishness; and more humor than a barrel full of monkeys. Those three little things are what make this opera a comic masterpiece of the highest order. But one other element necessary to success is a staging that brings the notes on paper to life. Livermore Valley Opera’s production sparkles.

The title character is an elderly bachelor whose only heir is his nephew Ernesto, with whom he is displeased because of Ernesto’s courting a young widow, Norina. Yearning to leave a direct legacy, Pasquale announces his intention to marry and accepts a proposal from his friend Dr. Maletsta to take the hand of the doctor’s sister, Sofronia, who has resided in a convent for years. Problem is, Pasquale has seen neither Norina nor Sofronia. Maletesta wishes to save his old friend from what he considers to be an unwise move, and he concocts a ruse that turns a parlor room comedy into a madcap romp.

The music joyfully expresses the bel canto idiom, replete with sensuous arias and richly decorated ensemble pieces that embrace both the romantic and humorous spectrum. Several quickly sung pizzicata pieces add to the brightness of the score. Another feature that adds to the melodiousness and continuity is Donizetti’s adoption of strings to accompany recitatives rather than the repetitive tinkling of the harpsichord.

LVO has adopted a non-traditional approach to Don Pasquale, based on a 2002 production by San Diego Opera, by setting it in the Wild West of the 1880’s rather than earlier in that century in Rome. The sets cleverly represent the time and place. The thematic transformation works and gives the opera a little local panache without sacrifice of the essential sense of social mores and relationships from Donizetti’s home environs.

By casting Peter Strummer as Don Pasquale, the company has landed a bass-baritone highly experienced with the role because he is very good at it. His vocal quality and physicality suit the role completely, and his comedic expression is impeccable.

As Norina, Erin Sanzero equally commands the stage with an imposing characterization. From the time she enters to sing the stunning “Quel guardo il cavaliere….So anch’io virtu magica,” she embodies the role with great dominance or affection as needed. Her powerful voice is supported by a lyric clarity, taking on the bel canto passages with great aplomb and with coloratura flourishes. And, yes, she hits the high notes, including some optional interpolations with a high D hit and held.

Alex DeSocio plays Dr. Malatesta, made up with Buffalo Bill Cody moustache, beard, and flowing long hair. At first, he seems too young to be a trusted friend of Pasquale, but that can be forgiven in return for his fine voice and strong presence. Marco Stefani as Ernesto looks the part of the handsome lover and struts about like a proud stallion, but he didn’t seem to be in the strongest of voices on opening night. He did improve over time and held his own in the touching love duet “Tornami a dir che m’ami.”

Each major player basks in the solo sun, but the several ensembles provide some of the finest moments, particularly the fun-filled quartet before intermission, “Ah, figliuol, non mi far scene.” From the opening overture, Alexander Katsman conducts with celerity, demonstrating command of the composer’s dynamics of tempo and volume shifts. The under-25 piece orchestra mostly belies its size by generating a full sound that meets the demands of the score.

On a personal note, this is the fourth Don Pasquale that this reviewer has seen in the recent two years – two versions of the same production at San Francisco Opera and Santa Fe Opera and a totally different one at Island City Opera. I admit to being unenthused about seeing LVO’s version. My wife and editor, Karin, even predicted that this would be the last Don Pasquale she would ever see. Could we make it through this one? Color us wrong. In part, we were taken by the Wild West theme. But we were also impressed by the vibrancy of the overall staging, the quality of the performances, and were reminded of the gold in “that thar” score. This is our favorite, and I can recommend it without reservation.