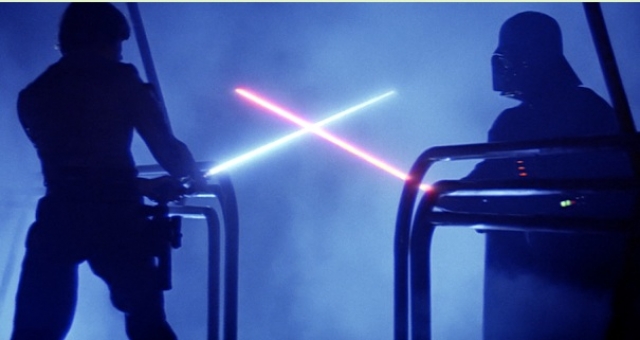 Episode V: The Empire Strikes Back is generally considered to be the best Star Wars film ever made. The dark middle chapter of the original trilogy came out in 1980 as the second movie released, and remains a firm fan favorite. It boasts an expanded universe, a complicated storyline alternating between the flight of Han Solo and Princess Leia from the evil and remorseless Darth Vader, and the Jedi training of Luke Skywalker at the hands of the diminutive but wise Yoda.

All this plotting gave John Williams free rein to create one of the most brilliant and original film scores of the 1980s. To the post-Romantic excess of the original film he added complicated cross-rhythms, a stormtrooper squadron of percussionists and above all the Imperial March, the pounding, snare drum-and-brass driven theme that indicates not only the arrival of Darth Vader but the opponents taking the field at the start of a New York Yankees game.

The New York Philharmonic offered three performances of Empire this week at David Geffen Hall, marking the first time that this remarkable film score had been played in juxtaposition with the movie in front of a live audience. David Newman was back at the controls, and he wasted no time in informing his listeners that with the slithering, icy violin parts and creative use of anvil and orchestral bells that this would be a much more exciting musical journey than the first film.

Indeed, if there was a problem with Thursday night's performance, it was that Mr. Newman and the Philharmonic musicians were a little too rigid. Performing an orchestral score in conjunction with a screened film is a cool idea, but the technology used forces the conductor to keep strict command over rhythm and meter and allows very little room for phrasing, rubato or other improvisations that make live performances so thrilling. However, his command of the players and their precise responses made one involve oneself in the events on screen.

In the middle act of the film, Mr. Newman delved into the rising, uplifting theme that accompanies the arrival of Yoda, the lush, Wagnerian music for the romance between Han Solo and Princess Leia and the thundering, clattering 1812 Overture passage in the "Asteroid Chase." Here, each exploding TIE Fighter is accompanied by crashing cymbals in a perfect marriage of special effects and orchestration. The climax of this chase, an encounter with a huge marauding "Space Slug" led to intermission.

The second half of Empire is not as thrilling as the first, Leia, Han and eventually Luke are drawn into a carefully set trap in Cloud City. Han is frozen in carbonite (there was a rumor that Harrison Ford didn't want to come back for a third movie) and the Imperial March at this point turns into a funeral cortege. The orchestra goes dead silent for the first part of the grand duel between Luke and Darth Vader, only to return as the Dark Lord of the Sith reveals the terrible truth: that he is actually Luke's father. (Reprinted with permission from Superconductor).

Knowing this plot point invariable affects how one watches Empire and particular the actions of Darth Vader. For the imposing, armored Dark Lord is the true protagonist of this movie, caught between his duty to the Emperor (a character seen briefly in this film, and in full in the next) and his desire to overthrow his boss and rule the galaxy with his son at his side. In the middle of all the darkness of this ending, it is John Williams' orchestra that offers hope, the coming dawn of the trilogy's concluding picture, Return of the Jedi.