Chicago's Eclectic Theatre at the Athenaeum 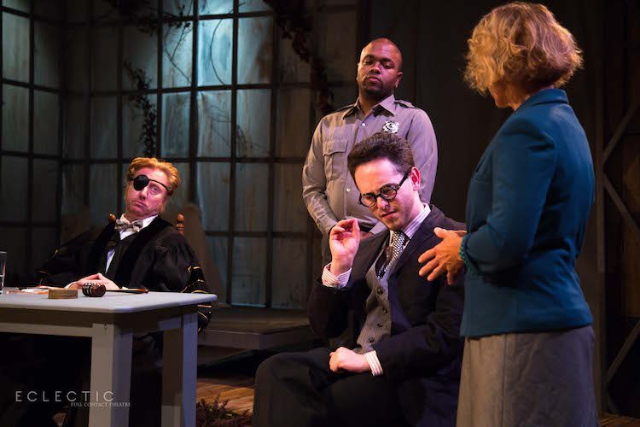 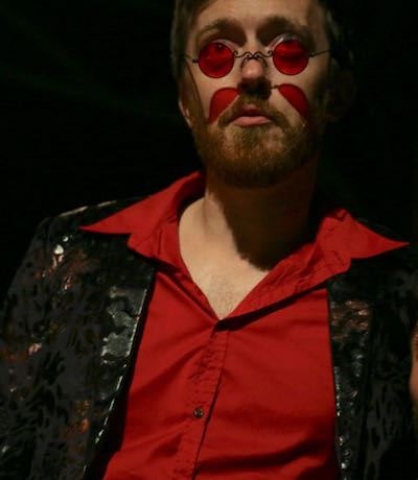 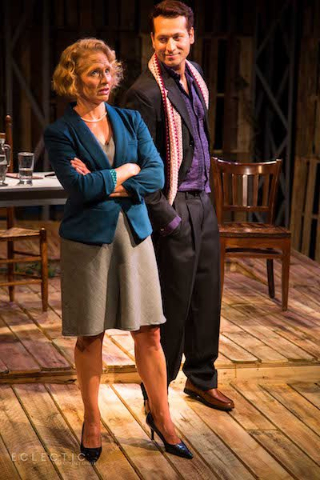 The scene is Purgatory and it’s a big trial, presided over by a judge who was with Lee when he surrendered at . Pontius Pilate takes the Fifth. A motley crew of historic figures—Mother Teresa and Sigmund Freud among them—takes the stand to testify as to whether Judas Iscariot was guilty.

Stephen Adly Guirgis’ 2005 play The Last Days of Judas Iscariot is a deliciously irreverent romp through a parade of history and fiction, including Judas’ imagined childhood. The new production by Eclectic Full Contact Theatre, directed by David Belew, is a little uneven but offers some startling and very funny moments.

The setting of the almost three-hour play is a courtroom, where Judge Littlefield (Andrew Pond) presides with the help of his bailiff (Eugene Bracy). The very serious defense attorney Fabiana Aziza Cunningham (Julie Partyka) faces off against the prosecutor El Fayoumy (Milin Chandna), an Egyptian who can’t produce his law license because he left it in his other suit in hell.

Mother Teresa (Tamara Heath) takes the witness stand and El Fayoumy asks her if there’s a hell and if so, if Judas is there. She replies “I doan know, but it don’t look good.” Simon the Zealot (Bracy) tells what life was like during the Roman occupation. “Imagine was taken over by violent devil-worshipping cannibals….”

Between witness testimony in “God and the vs. Judas Iscariot,” various saints and other personages appear to tell their memories.

The liveliest witness is Satan (Michael Woods—“I didn’t invent deviled eggs and I’ve never been to ”) who keeps being conjured by the judge to take the stand. He insults both lawyers, demands the souls he is owed (including Judge Littlefield’s) and in one scene, meets Judas in a bar. At one point, Satan admits, “I’m just a fallen angel trying to keep his dick hard.” Woods, a alum, is terrific as Satan. He fully embodies the role; every gesture, every expression is in character. And clearly he relishes the Guirgis dialogue.

In this catalog of characters, we can’t forget Sigmund Freud (nicely played by Lockman). Cunningham asks him if Judas was a psychotic (“without doubt”) and whether psychotics are responsible for their actions (“No, they are not.”) Fayoumy accuses Freud of consuming cocaine in large quantities and Freud responds that it was part of his research. After a particularly silly question, Freud says, “Your mother denied you her breast, didn’t she?”

A more relevant witness is the rabbi, Caiaphas the Elder (Pond), high priest of the Sanhedrin, who handed Jesus over to Pilate. He confesses that Judas disgusts him. When Cunningham grills him, he denies that he knew Jesus would be executed by Pilate. But “I can’t even count how many of the sacred laws Jesus broke with wanton disregard and disdain…. He consorted with the unclean, and with women, and with prostitutes. He performed miracles on the Sabbath.”

Near the end of the play, Butch Honeywell (a good old boy played by Blaustein) arrives to tell Judas that the jury found him guilty. He then launches into a way-too-long personal story about his infidelity and guilt. Jesus (Matthew Harris), who has appeared now and then throughout the play, comes and sits with Judas.

Despite the edgy humor (and plenty of lines to delight an atheist), there is an underlying seriousness in Guirgis’ play. It may be, as my plus-one observed, that everyone was to blame in one way or another for Jesus’ betrayal and crucifixion. Judas of course, betrayed him to the Romans for 30 pieces of silver, then repented, returned the money and hanged himself. But he still languishes in hell. Even Butch’s long story is an admission of betrayal and guilt.

Belew’s direction is smart and moves the long play along as well as possible. I would personally like to see 15-20 minutes cut from the script, even though that might mean deleting some excruciatingly funny lines. Among the cast members, Partyka as Cunningham and Pond, as the judge and the rabbi, are excellent, as is Woods as Satan, as I noted before. Unfortunately, Chandna as El Fayoumy, while a charming character, cannot be heard clearly if he’s not facing the audience. And Bracy, as the bailiff and Simon, frequently drops his lines. The play has another month to run and I’m sure Belew will work with the cast to smooth out these flaws.

Scenic design is by Jeremy Hollis with handling lighting and L.J. Luthringer as sound designer. Catherine Tantillo’s costume designs managed to fit the characters from every era of Purgatory.

The Last Days of Judas Iscariot premiered in 2005 at the Public Theatre with Philip Seymour Hoffman directing, Eric Gogosian as Satan and Sam Rockwell as Judas. Guirgis is author of several plays performed recently in . Eclipse Theatre staged Jesus Takes the A Train, The Little Flower of East Orange and Our Lady of 121st Street during their 2016 Guirgis season. Steppenwolf produced Between Riverside and Crazy in 2016.

Judas Iscariot by Eclectic Theatre at the Athenaeum, 2936 , continues through October 29. The play runs 2 hours and 40 minutes plus an intermission. Performances are Thursday-Sunday. Tickets are $27 with discounts available. Recommended for 13+.