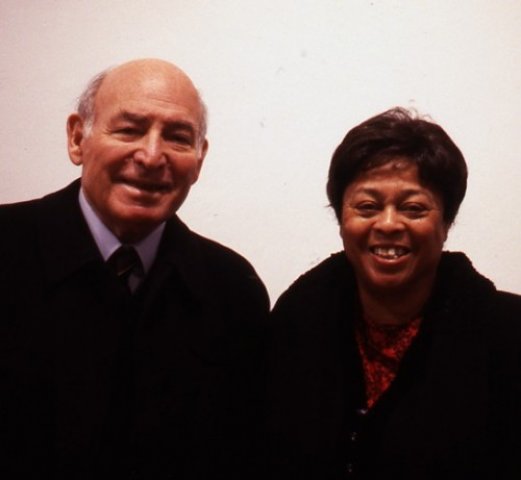 Today, on what would have been his 96th birthday, we honor the memory of jazz impresario George Wein (1925–2021), a pioneering jazz producer, musician, patron of the arts, and advocate for equality who changed many lives through his wholehearted belief in art and artistry. A dear friend, mentor, and trusted gallery advisor, George encouraged, challenged, and inspired us.

Michael Rosenfeld Gallery had a long and personal relationship with George and we remember and celebrate his kindness and spirit. In a recent letter to Michael Rosenfeld on the occasion of the gallery’s 30th anniversary, he wrote: “30 plus years ago, by chance I walked into a brownstone building on the Upper East Side. There was a sign outside that said: Michael Rosenfeld Gallery. That was the day I met you. And to say it changed my life, is putting it mildly.”

We are just a few of the many so fortunate to have known this legend and witness his love for the arts. George is best known for conceiving and organizing the Newport Jazz Festival, first staged in 1954. The early success of the festival sparked a career renaissance for George, who spent the following decades organizing jazz festivals across the globe. The Newport Jazz Festival has since become known as a primary site of jazz history, staging important performances by the likes of Miles Davis, Duke Ellington, Billie Holiday, Dizzy Gillespie, and many others. Wein was also a dedicated jazz pianist, briefly studying with Teddy Wilson and performing at his festivals and other venues with small groups usually billed as the Newport All-Stars.

In 2006, his philanthropy enabled The Studio Museum in Harlem to establish the prestigious Joyce Alexander Wein Artist Prize in honor of George’s late wife, a longtime Trustee of the museum and ardent supporter of living artists. The award has since advanced the careers of such contemporary luminaries as Lorna Simpson, Glenn Ligon, Derrick Adams, Gary Simmons, Simone Leigh and, most recently, Cauleen Smith. And like these recipients, George, too, received many awards and honors throughout his life, including induction into the French Legion of Honor in 1991, a DaCapo Foundation Lifetime Achievement Award for Cultural Innovation in 1999, being named a National Endowment for the Arts Jazz Master in 2005 and a Trustees Award for lifetime achievement from the Recording Academy in 2015. He also was honored by Presidents Jimmy Carter and Bill Clinton at White House jazz concerts in 1978 and 1991. In 2015, he received a Grammy Honorary Trustee Award for his innovations in music production and presentation.

Today, in remembrance of George Wein, we encourage you to read his 2003 autobiography Myself Among Others: A Life In Music and listen to his music.