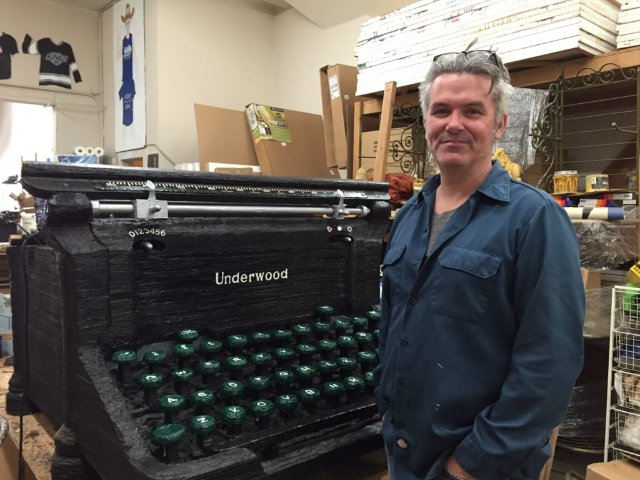 I could hear the clickety-clack of his typewriter a block away. It was quiet around the Union Stock Yards Gate with only an occasional car or truck passing. And as I stood across the street, at the corner of Peoria and Exchange, I could see and hear the artist at work.

Tim Youd is a performance artist. His work builds on the power of the written word as he creates artifacts from classic works of literature on vintage typewriters in locations that play a central role in the original work. Right now, he’s retyping The Jungle, Upton Sinclair’s 1906 novel about men at work in the brutal, bloody conditions that prevailed in the meat-packing industry of the period. With a copy of the book clipped to a small easel, he’s retyping it word by word on an Underwood Standard, similar to the typewriter Sinclair used.

Youd has been at work on his 100 Novels Project for about 10 years. The Jungle is #71 and he just finished retyping Sherwood Anderson’s Winesburg, Ohio, on a early Remington typewriter at the Arts Club on Ontario Street. Anderson lived nearby (at the corner of what is now Wabash and Superior) when he was writing the book (a short story cycle), published in 1919.

There will be more Chicago novels in his Chicago cycle, Youd says, but he hasn’t decided which ones yet. Chicago has so many writers and such a strong literary tradition, he said, mentioning writers like Nelson Algren, Saul Bellow, Gwendolyn Brooks, Richard  Wright, Edna Ferber and many more. (I had the impression that Algren is a strong contender for the next Chicago novel. He would like to retype Never Come Morning.)

The writers he chooses for his 100 Novels Project all worked between 1900 and 1980, when typewriters started being replaced by computers for many writers. And the novel has to have been typed by the author. Mark Twain submitted the first typed manuscript to a publisher, Youd said, but it turned out that Twain didn’t actually type it.

You can find a partial list (up to #52) of the 100 Novels retyped here. And a series of performance photos here.

Youd owns about 100 typewriters and is usually able to find the appropriate one for each novel. He works with a small video camera strapped to his chest. He’s recording his fingers as they tap the typewriter keys and plans to make a video at the end.

His retyping becomes a physical work of art through his process; he types on a double page of reinforced paper that he rolls into the typewriter over and over again. The result is a leathery, multi-layered inked page, backed by a page incised with the words of the novel. The paper gradually deteriorates. Youd showed me how the paper on which he’s retyping The Jungle is thinned out and broken in places when he’s about one-third through the 375-page book; this is a long novel for his project. What do you do about that? I asked. Just mend it with paper and tape, the old-fashioned way, he said.

When he’s finished typing, the two pages are framed, museum-style, as a diptych, an artifact of the book. The Cristin Tierney Gallery in New York, his rep, exhibits and has sold a number of Youd’s works to private collectors.

We talked books and art, sitting in the plaza that surrounds the Stock Yards Gate, designed in 1879 by Burnham & Root, the iconic Chicago architects Daniel Burnham and John Wellborn Root. The date incised on the arch is 1865, the year the stockyards was established. The gate is a National Historic Landmark.

Youd said the whole project is his “effort to be a good reader” and to “try to have a dialogue with the books.” He has to like the book enough to spend many hours with it, the hours it takes to retype it. He has read every novel at least once before he retypes it. As he types, he’ll annotate a passage that he finds beautifully written or insightful—or odd.

Youd notes that John Edward Williams, novelist and professor at the universities of Missouri and Denver, told his creative writing students to retype a novel to understand the written work. Williams was author of Augustus (which Youd has retyped) and Stoner, a novel in a campus setting (Mizzou, my alma mater). Both Stoner and Butcher’s Crossing, another Williams novel, are on his list for possible retyping.

Before becoming a performance artist, Youd worked in investment banking and did a stint in Hollywood, while doing some studio painting. He always was an avid reader, he said, and decided to make the connection between art and reading. He occasionally did some performances typing and reading and began developing the 100 Novels Project in 2011. The first novel he typed was Hunter S. Thompson’s Fear and Loathing in Las Vegas, in February 2013, in Los Angeles on an IBM Selectric II.

If you want to stop in and visit Tim Youd while he’s working, the Stock Yards Gate is easy to find. The address is 850 W. Exchange Ave.—a block west of Halsted Street between 40th and 41st streets. He works 11 a.m. to 4 p.m. Monday through Saturday and expects to finish The Jungle on October 8. (In case of rain, he’ll be working at the Arts Club.)