The Elixir of Love by Gaetano Donizetti 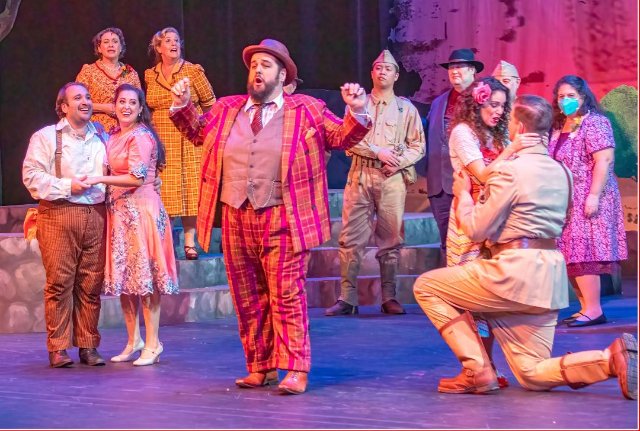 Opera can be the most weighty and severe of the performing arts.  Thus, when a frothy and fun piece comes along, it may seem like a guilty pleasure.  So it is with “The Elixir of Love” (L’elisir d’amore).   But make no mistake, it flows from the same pen that gave us the dark “Lucia di Lammermoor” and the trifecta of Tudor-period operas, as well as other operas buffa like “Don Pasquale” and “Daughter of the Regiment.”

Although Donizetti concocted this superficially light-hearted confection, “Elixir” is a serious delight from curtain to curtain, both as an entertainment and as a great work of composition.  As we have come to expect, Livermore Valley Opera once again punches above its weight with a totally appealing production that hits all the right notes, literally and figuratively.  This rather small-scale production works well in a smaller house, and the performing artists do a magnificent job with singing, comic acting, and playing.

“Elixir” tells the story of peasant Nemorino who is in love with landowner Adina, a woman above his station.  Of course, Adina shows no interest in Nemorino.  Itinerant “medicine man” “Dr.” Dulcamara will provide the elixir of the title that he promises will make the consumer irresistible.  Complications follow, and happily, the ending meets expectations.

Appropriate to our California home, Adina is portrayed not just as any landowner, but as the owner of the vineyard, where the opera is set.  The charming stage is comprised largely of features like grapevines and the winery depicted cartoon-like in two-dimensions.  Even Dulcamara’s medicine wagon appears on a flat, moveable panel, but this artistic contrivance pleases.

Melody abounds in “Elixir,” and even the recitatives, which seem infrequent, sound unusually melodious.  From Nemorino’s opening aria, ‘Quanto è bella!’ about how gorgeous he finds Adina, we sense how beautiful the music will be.  As importantly to this production, we know from his very first phrase that Christopher Bozeka as Nemorino will regale us with a wonderful tenor instrument possessing an emotion-filled Italianate lilt with a big tremolo that suits this work so well.  In addition, his fine comic acting makes Nemorino a funny and sympathetic character.

In answer, Elena Galván, who has graced Bay Area opera stages in several productions, equally captivates as Adina.   From her first arias about an elixir that she has read about, ‘Della crudele Isotta,’ and about her fickleness as a lover in ‘Chiedi all’aura lusinghiera’ she displays not only a commanding middle range but some spinto characteristics. She possesses an extremely powerful yet seemingly effortless top end and a facility for rapid patter – a skill required of male roles on several occasions as well.  Toward the end of the evening, Galván reveals her versatility with an astounding array of vocal gymnastics.

It's not enough that Adina has rejected Nemorino, but she falls instead for Belcore, a sergeant in the visiting army regiment.  That part is played by the towering figure of Andrew W. Potter, who diminishes Nemorino physically and with a dominating, confident swagger as well.  Belcore’s role is written for a baritone, and Potter handles that range quite smoothly and mellifluously.  However, he is actually a lyric bass, and there is one passage for which he deftly descends into an almost basso profundo mode.  It is so far out of baritone range that it presumably was written in as an alternative for a deeper voice.

Into the fray comes the snake oil salesman, Dulcamara, who has no interest but making a quick buck and a quicker getaway.  Although the character perpetuates fraud, he is played in a jovial manner by baritone-bass Samuel J. Weiser with little edge and a fair bit of charm.  He sings with great verve, though his timing with the orchestra is not always on.  Dulcamara facilitates the merriment and confusion by plying Nemorino with a supposed elixir that gives him a shot of courage to take on his challenges.

Can any review of “The Elixir of Love” fail to mention its signature aria, ‘Una furtiva lagrima’?  The mournful air, accentuated by the interplay of the tenor’s voice with the haunting bassoon, makes it one of opera’s memorable pieces.  As with all of his singing, Bozeka delivers the goods with a passion-charged rendition of this beautiful piece that received a well-deserved extended applause with bravos from the audience on opening night.

The composer has also created a number of attractive ensemble pieces, which are as well executed as designed.  A final mention goes to the Alexander Katsman conducted orchestra and the chorus.  For their size, they create a very full and rich sound that enhances the overall production and contributes to a memorable experience.

“The Elixir of Love” (L’elisir d’amore), composed by Gaetano Donizetti with libretto by Felice Romani after Eugène Scribe’s text based on Daniel Auber’s opera “Le Philtre,” is produced by Livermore Valley Opera, and plays at Bankhead Theater, 2400 First Street, Livermore, CA through October 9, 2022.