Why by Peter Brook and Marie-Hélène Estienne

Theater for a New Audience Gives A Crucial Answer 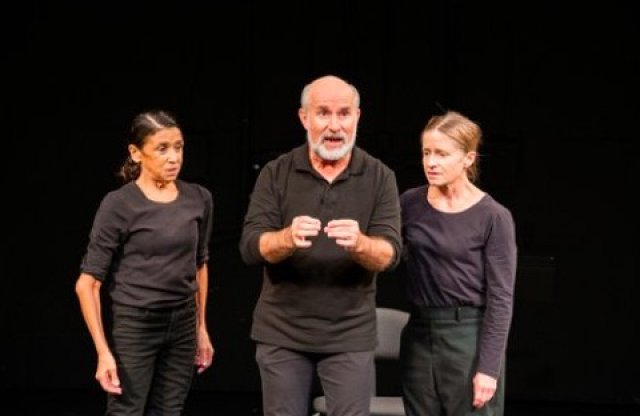 Why? at Theater for a New Audience Kathryn Hunter, Marcello Magni, Hayley Carmichael

Peter Brook and Marie-Hélène Estienne’s Why is playing at the Theater for A New Audience.  The co-director-writer Brook’s work spans a century.  As the  play starts, curtainless, we are told that the title question is on a tiny scrap of paper in a small box.  Like a note launched in a bottle to bob on the ocean's surface, it has landed at last in Brooklyn.  Why?

Why theater?  In creating the world, God rested on the 7th day.  He left a void.  People did not enjoy rest. They were bored.  Groups of people called directors, writers, costumers and lighting experts got together and mounted shows to entertain.  The question of the order of importance of each role arose. It has yet to be answered.

In writing and directing Why with Estienne, Brook moves from the delicious philosophical basis of theater into its history in Russia.  The writers make the case for speaking truth to power even as they show its dire consequences. The depths to which the state has gone to quell voices of the theater becomes the focus.

The tale of Vsevolod Meyerhold and his wife, the actress Zinaida Raikh, is told in horrifying gestures.  Death scenes in prison, and also at home, where Raikh was stabbed with knives 17 times and had her eyes gouged out, are gruesome. How dangerous the theater can be for people in power is seeringly illustrated.

Performances by three actors are arresting.  Marcello Magni moves magically.  Trained by the physical actor Jacques Lecoq, Magni’s hands, holding nothing but air, help us imagine many different objects.  Hayley Carmichael adds a soft touch.  Kathryn Hunter is an unforgettable storyteller.  Slender of build, she moves like a lynx as she articulates all the degrees of emotion. A catch at the back of her voice is compulsively engaging.

Not everyone can take on the mantle of a director or, as Brook prefers, distiller.  Brook was born to create.  He literally distilled Bizet’s Carmen, reducing it to the four central characters and cutting three and a half hours to one and a half.  We do not miss any music.  We come to know the four characters deeply.  His use of piano music in Why further demonstrates his musical sense.  Laurie Blundell at the keyboard plays with a light touch.  The notes have significance, yet weave into the stage action with just the right feel.

Brook has an exquisite sense of timing, his choices of subject matter compel and accompanying sounds suit perfectly. Not everyone is made to answer the question, Why theater.  Brook very clearly is.