Coming Too Soon to a Theatre Near You 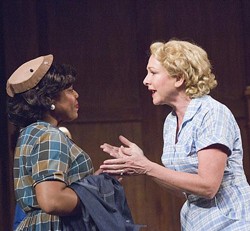 Bev is deluded to think that the servant Francine is his friend. Courtesy photos. 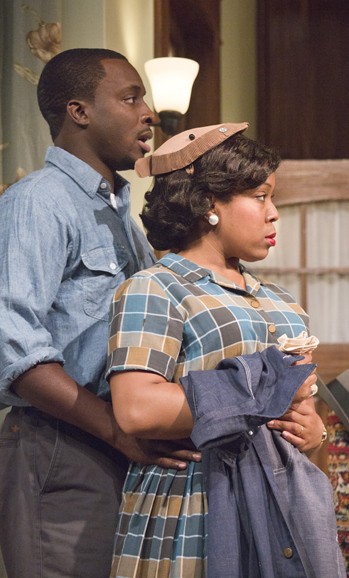 They held the moral high ground. 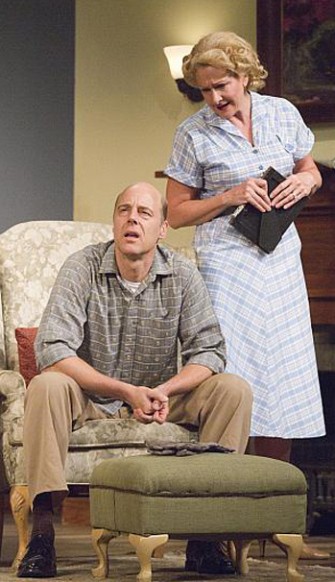 Russ and Bev reminded me of Archie and Edit from TV’s All in the Family. 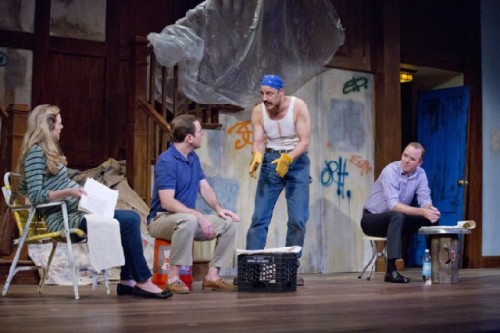 All hell break loose in the second act.

Clybourne Park won the Pulitzer Prize for drama in 2011 followed by the 2012 Tony for Best Play. It is a continuation of Lorraine Hansberry’s iconic 1959 play A Raisin in the Sun which tracked the black Younger family’s attempt to buy a home in the all-white Clybourne Park neighborhood of Chicago.

Following its run on Broadway it has now been produced by every regional theatre community in America. It is currently running at Barrington Theatre Company through October 13. This is a co production with Dorset Theatre Festival in Vermont where it was presented in August before transferring to Pittsfield under the direction of Giovanna Sardelli with the same cast and some adaptations of the set designed by Narelle Sissons.

This is the fifth time that the play is reviewed by Berkshire Fine Arts. I first reviewed it on Broadway and now at Barrington. Melissa Hall covered it in Indianapolis, Mark Favermann in Boston, and Leanne Jewett this summer at Dorset.

On Broadway, in a sharp, carbolic production with precise abrasive shifts my head snapped back stunned by strident confrontations, often stereotypical racial profiling, and some really outrageous and hurtful jokes. The first impression was that the play, while effective, seemed too pat and contrived. The moral high ground is too weighted toward the black domestic servant Francine (Lynette R. Freeman) and her husband Albert (Andy Lucien) who are the sellers of the home in question, Albert and Lena in the second act.

By contrast the white characters in both acts range from ditsy and naive wives to males from flawed to despicable. Knowing the plot during this second production there were no surprises and it is was more a matter of watching the pot boil and its inevitable explosions.

Overall, the Barrington production is adequate with uniformly fine performances. In the first act, however, the pacing and timing was not as sharp as it could have been. Often the lines of dialogue just didn’t connect. You felt that the actors weren’t really listening to and reacting to each other. The plot development was too incremental. Compared to the second act when decorum is shelved and the characters are all off the leash. Often too much so. The mayhem of the lively second act appears to play well with audiences. It is indeed fun to watch the fireworks as the racism so endemic to Middle America bolted out of the box.

There is a then and now presentation of racism. Fifty years ago it was deeper but also more stylized and repressed. White America took its racism for granted. It had not yet been challenged by the Civil Rights Movement. We had won the Great War and believed in the mantra of saving the world for Democracy even though it existed in short measure at home for African Americans.

During the talk back which followed the show there were two classes from MCLA. One of the students wanted to know how the characters developed their roles as 1950s characters? The actors responded with comments on their research and preparation.

For me much of the first act evoked aspects of the vintage TV series All in the Family. In a similar manner the curmudgeonly Russ (Remi Sandry) was an Archie Bunker tethered to his easy chair from which he denounces a community of hypocrites. Returning from Korea his son Kenneth (Kevin Crouch) suffers what today would be recognized as post traumatic stress. He hung himself in the attic. The wife Bev (Carol Halstead) could be Archie’s dithering, stumbling, well intended and hopelessly confused Edith.

They are selling their home to escape the ghost in the attic whose trunk of documents and memories Russ buries in the back yard. Bev has asked a minister (Kevin Crouch) to speak to and find reason with Russ. In no uncertain terms, like everyone else in the community who shunned and abandoned them, he tells the minister to fuck off.

Much of the shock value of the play derives from the charged racial rhetoric particularly in the telling of outrageous jokes. For me, in this second take on the play, the most compelling image is the tale of the chafing dish. It so aptly conveyed the metaphor of subversive and latent racism.

Francine, a domestic servant who knows her place, is helping Bev to pack and move. The employer, in a nostalgic reverie, relates moments over the years when they have shared small adventures. There is an assumption by Bev that they are friends. In that context she wants to give Francine a gift of an unwanted chafing dish. Better to give it away than put it in the trash. Why would something of little or no value to Bev be treasured by Francine? Rightly Francine declines the hollow gesture. Later her husband does Bev a favor in getting Kenneth’s trunk down from the attic. She insists on paying him for the trouble. At first a pittance of fifty cents. Refused. Then a dollar. Refused. Then two dollars. Refused. Then the fucking chafing dish. Refused.

There is a similar but more overt image in the second act. When the cat’s out of the bag we hear “Half my friends are black.” When challenged to name one and then two the obvious happens. The “friend” is a coworker. We see that all the time in television shows usually about cops. Is getting along with a colleague really about friendship?

The overarching theme of the play involves the phenomenon of white flight from cities to suburbs. How once middle and upper class neighborhoods flipped from white to black then, through gentrification of the past two decades, back again to white.

This play by the white Bruce Norris picks up where Hansberry’s  A Raisin in the Sun leaves off. But it also has parallels to the Century Cycle of plays by August Wilson which tracks similar transitions in a neighborhood of his native Pittsburgh.

If Clybourne Park is so ubiquitous what was the pressing need for the Barrington/ Dorset production?

The answer came from staying behind for the talk back. It gave me the sense of being less a critic than a member of the audience. As critics we mostly write to please ourselves or often grudging peer approval. Some critics feed the company juicy lines to pull out in quotes for ads to sell tickets.

Barrington Stage, under artistic director Julianne Boyd, is deeply committed to teaching and presenting plays which promote debate and discussion. The fall productions are often coordinated with school programming.

It was very significant to be seated next to those MCLA students. When I struggled to control coughing she, like other audience members, offered me a lozenge and even a sip of her water. We chatted during intermission and while exiting the theater after the talk back.

I asked if she will have to write an essay for class? She described the freshman experience seminar she is enrolled in. It reminded me of a similar one that I taught at Suffolk University. The class came with a small budget which I used to buy tickets for the students to see August Wilson’s last play Radio Golf at Huntington Theatre Company.

My freshman seminar focused on contemporary arts. Some of the students who enrolled intended to major in the arts. I was surprised how for many it was their first exposure to equity theatre. It was a great teaching experience in probably the most successful course I offered.

That was likely the case at Barrington as well. Gosh, how do you put a dollar value on that? I was absorbed by many of the questions and comments of the mostly older audience. Much of the discussion involved aspects of racism and gentrification in their individual lives and communities.

I came away with a deepened respect for the play and its ability to promote soul searching from audiences all over America. There are many reasons why we come to theatre.

As one of the actors put it there is an emotional difference from performing a Neil Simon comedy where everyone has a laugh then goes home and forgets about it. How different to be involved in a play which can make people think and act differently?

One audience member stated how Raisin in the Sun was an iconic paradigm for her generation. She speculated that Clybourne Park might serve in a similar capacity for its audience.

There are times when critics need to pay more attention to the audience. It was insightful to hear what they had to say about the performance. It didn’t change but certainly modified my experience.

That statement may not sit well with some of my colleagues.