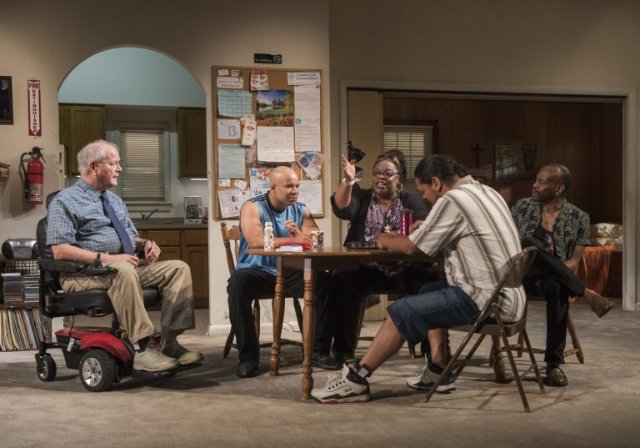 What makes one a victim? And what moral superiority does a victim have over their aggressor? When is one’s humanity lost, and what qualifications, if any, are there to getting it back? How do we as a society punish those who have done the unthinkable? And is a perpetrator responsible for the continued trauma inflicted upon those they’ve done harm to? What good is “closure” when those who have hurt us so often have done so because of the hurt that has been done to them? Welcome to the hurricane of emotional and moral conundrums contained in Bruce Norris’ uproarious, heartbreaking, and deeply disturbing world premiere Downstate at Steppenwolf Theatre.

Concerning a group of four registered sex offenders sharing a house in downstate Illinois, the play pivots around an encounter between Frank (a breathtaking Francis Guinan) one of the group-home’s inhabitants, and Andy (Tim Hopper, brilliant as ever), who was molested by Frank when he was a boy. Andy has made the trip from Chicago to confront his former piano teacher and abuser, insisting Frank read aloud a statement detailing the abuse, and swear to its authenticity. Frank is confined to a wheelchair, elderly and soft-spoken; he can no longer play piano because of arthritis, and, in a tragicomic twist of fate, has been paralyzed from the waist-down (the literal castration so many wish inflicted upon men who do such things to children). The relationship remains confusing and tormented: a prized pupil and his mentor, forever stuck in a loop of affection and disappointment, of unspeakable hurt and inconceivable longing.

Elsewhere in the house, there’s Dee (an astonishing K. Todd Freeman) who has traded a career as a musical-theater performer for a life of quiet anger and DVD collecting, Felix (Eddie Torres) who keeps to himself and retreats to God in order to repent for his sins, and Gio (Glenn Davis), a smooth-talking wannabe businessman who has big plans once he’s off the registry (his crime, statutory rape, is, as far as he’s concerned, nowhere near the crimes of his housemates).

As the group’s de-facto mother, a sort of acid-tongued Wendy to these extremely Lost Boys, Cecilia Noble plays parole officer Ivy, who has the unenviable task of looking after these criminals, tracking their whereabouts and delivering punishments for infractions. The men quibble with and protest against new encroachments to their already minor freedoms, such as an updated perimeter that will force them to give up their local grocery store and shop elsewhere. But she doesn’t budge, and delivers tough love to these men; despite knowing the very dark underbelly of their very dark pasts, she demonstrates her capacity for compassion towards these societal outcasts. It’s a stunning performance that simmers and sometimes boils, with so much riding just below the surface, you can practically see her skin crawl. Noble’s first exit had the audience breathless and inches away from full-on applause.

Director Pam MacKinnon, working from Norris’ dynamic and layered script, directs each performance with a fine-tooth comb. This is a group of detestable, rotten apples, but each of these men is also, in his own way, disarming and hilarious, with quirks and charms that make us forget why they are in this make-shift homestead wearing ankle bracelets; until we’re reminded, and once again infuriated by the hypocrisy. But in the theater, we cannot immediately respond with outrage. We must absorb, and accept. We sit with these men, we listen to each and every exchange, we are forced to hear dialogues where these human beings qualify and quantify and compare their deeds,  where they defend one another and lash out against each other, where they use the very details of the unspeakable acts done by them (and sometimes to them) as emotional weaponry and psychic defense. Downstate demands we confront the threshold of our empathy, and offers a glimpse into the very real, very sad lives of those who are paying for their sins, and offers us an opening for conversation once the curtain falls.

The work being done in the Upstairs Theater at Steppenwolf is so brave, so incredibly moving and of the moment, that I cannot recommend it enough. As theater-goers, we all hold dear those flawless productions; this is one of those plays, and I hope it continues to be talked about and produced for years to come. The team here has managed to do something incredibly rare; they have humanized the monstrous and given the audience space to question our moral allegiances, to pit our own narrative against those who have forcibly inserted their narratives into the plays of our lives, and wonder what it all means. I believe that this is essential viewing for anyone with a heartbeat, because, like so, so many in the audience on a Sunday night on Halsted Street in Chicago (as evidenced by the sobs and sniffles and vocal affirmations around me) and like so, so many that will see this play during its run: me too.

Downstate, a co-commission and co-production with the National Theatre of Great Britain, is playing through November 11 in the Upstairs Theater at Steppenwolf Theatre, 1650 N Halsted St. The show runs 2 hrs and 25 mins, including one intermission. Tickets are $20-$99.