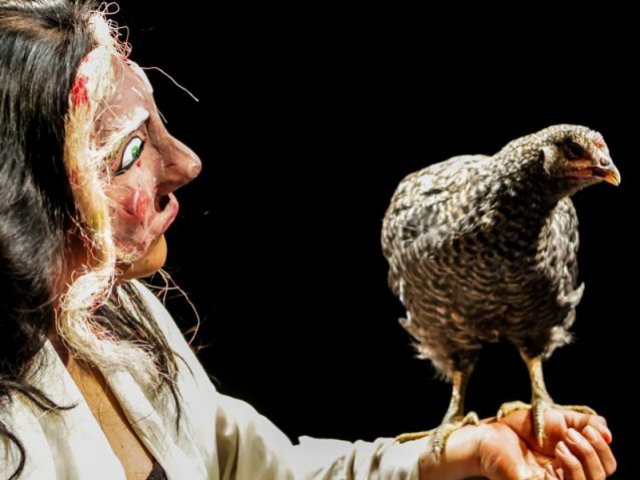 Mendoza, a thrillingly raw and earthy adaptation of Shakespeare’s Macbeth, is being presented this week at Goodman Theatre in collaboration with the Chicago Latino Theater Alliance. This very graphic and bloody production will end Sunday, October 7, so grab your tickets quickly. The production is part of Destinos, the Chicago Latino International Theater Festival.

The production by Los Colochos Teatro of Mexico City is staged in the round, with a cast of nine and a scenic design of … almost nothing. Antonio Zuniga and Juan Carrillo adapted the script, inspired by the work of Mexican writers Juan Rulfo and Elena Garro. Carrillo directs. The basic plot and dialogue of Shakespeare’s version is retained but the play is dramatically set against the background of the Mexican revolution (aka the Mexican civil war) of a century ago, and references the gruesome events of September 2014, when 43 Mexican male college students were kidnapped from their bus in the state of Guerrero and disappeared. Few of the bodies were ever found.  The event is symbolized by a dramatic count—uno, dos, tres to cuarenta y tres—near the end of the play.

The audience sits on hard folding chairs in Goodman’s Healy Rehearsal Studio for this play that runs 135 minutes with no intermission. The cast performs in the space within the rows of chairs. And it is a very intimate and participatory performance. Occasionally, an actor will kneel in front of an audience member to argue a point. Or an actor will hand a prop or a hat to an audience member to hold, or offer a beer or a jelly bean. At one point, a whole row of audience members wore masks and drank beer. Bottles of Corona are passed out freely. (A young man sitting near me was almost a member of the cast as various actors came and sat next to him and made him part of the story. He told me later that it was totally unexpected and a great experience.)

The play is performed in Spanish with English supertitles. But because it is a rather familiar story, and so emotionally performed, I found that I didn’t always need to read the supertitles. The language of Mendoza is beautifully poetic and often brutal.

Mendoza opens with the Bruja (witch), masked and bearing a long white fabric swath that will become more and more bloodied. She speaks to the live hen on her shoulder, which she calls Canosa, about events to come. Mónica del Carmen plays the Bruja as well as Rosario, the Lady Macbeth counterpart and wife of Mendoza (Marco Vidal). Del Carmen’s performance is richly emotional in both roles. She is loving, lascivious and fierce, as she lures her husband into murdering Montaño, the governor. “I thought I married a man,” she says. “The throne is yours…. Cut him like a pig.”

Mendoza assassinates Montaño (“I stabbed him three times in the throat… and he said ‘May God forgive you.’”). Mendoza is covered with blood and anguish. Montaño’s passing is symbolized as he walks off between two rows of his soldiers. The actor (Martin Becerra) then sat down in the chair in front of me and transformed himself from bloody corpse into another character, Medina, by donning shirts and a bandanna.

Esparza (Ulises Martinez), Macduff’s counterpart, becomes Mendoza’s enemy and vows revenge after his wife and children are slaughtered and his house burned. And thus the rest of the Bruja’s curse is carried out.

When the play ends, the actors pass out bottles of Corona to the audience and sit around the small table to drink and celebrate the end of the story. “It’s good to know that nothing like this happens now,” one actor says. “Our government is good…. And we are fucked.” The audience reacted raucously to this.

Los Colochos Teatro’s Mendoza is vastly different from the recent slick theater and illusion-inflected Macbeth, directed by Teller and Aaron Posner, at Chicago Shakespeare. The actors here perform on the bare floor, with metal folding chairs and a small folding table for a set. The chairs serve as percussion instruments, seating and occasionally weapons. It is truly creative staging. I fou. nd myself comparing it to some of the lavish sets used in Goodman mainstage productions and to the detailed and meticulous scenic designs by production designers like Santo Loquasto. When you have great material, director and actors, a bare stage is all that’s needed.

The masks, familiar in Mexican folk art as well as an homage to Greek theater, are an important design element, created by Martin Becerra. Costumes are by Libertad Mardel. Lighting design is by Mario Eduardo D’León.