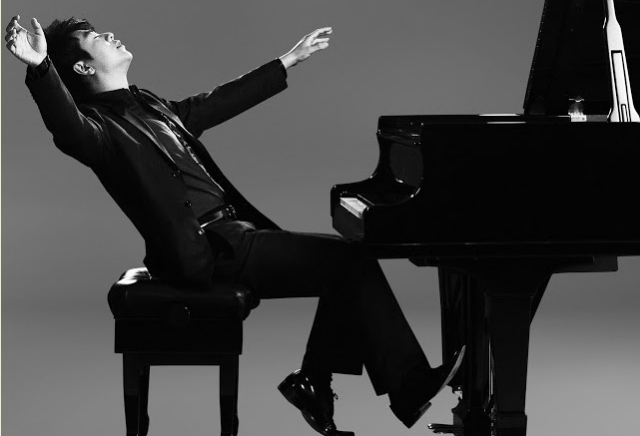 The pianist Lang Lang. Presumably this is not how he injured his left hand before Wednesday night's season-opening Carnegie Hall concert where he played with Chick Corea and Maxim Lando. Photo © Sony Classical.

How do you get three pianists to play together?

That conundrum, explored by only a few composers over the centuries, was what faced Yannick Nézet-Séguin and the Philadelphia Orchestra as they prepared for Wednesday night's concert opening the 2017-18 season at Carnegie Hall. The program featured two Leonard Bernstein works flanking George Gershwin's Rhapsody in Blue. This was an important concert for the resurgent Philadelphians, who missed their chance to play opening night three years ago. It was also a crucial concert for music director Yannick Nézet-Séguin, whose profile has risen in New York since he accepted the post of music director at the Metropolitan Opera, effective in the 2020 season.

Rhapsody in Blue is a beloved work for piano and orchestra. It straddles the line between classical chestnut and jazz standard, with one foot in each world. And yet, because of its status as a "popular" piece of classical/jazz, it never gets the respect it deserves. Gershwin was a brilliant talent, a fierce songwriter and a destroyer of barriers, and this 18 minute piece represents the perfect shattering of the artificial walls between the two genres in a riotous celebration of sounds. It is the perfect opening night work.

Y'see, the original plan was to have Rhapsody's piano part played by Lang Lang, the international piano sensation and one of the biggest stars of this new firmament of young classical artists. Then Lang suffered an arm injury and plans were changed. The program still featured Rhapsody, but in a version for two pianos. The second was manned by Chick Corea, a beloved figure from the world of jazz. And serving as Lang Lang's left hand, his pupil Maxim Lando. At 14 years old, Lando is a product of Lang's International Music Foundation. He suddenly found himself under a bright spotlight indeed.  Lando was reviewed when he was ten on this site.

For the most part, this experiment in group collaboration worked. Lang and Corea have vastly different approaches, and the contrasting sounds coming from their twinned Steinways made for interesting listening. The long cadenzas in this work were stretched and twisted to their limit, making room for fragments of rumba, swing, and even Beethoven from Corea, echoed with ornamentations and opera-like fioratura from the upper end of Lang and Lando's keyboard. Lando made his own contributions too, supporting Lang and providing occasional flights of fancy. At one point, Lang leaned back and let his pupil play.  Nézet-Séguin turned and watched, his podium being the best seat in the house from which to observe the three pianists.

Then he turned back and brought the Philadelphia players back in, a swelling, lush surge of strings tempered by the kiss of a glockenspiel and the commentary of horns and winds. This is one of Gershwin's most compelling musical moments and it led to two short, eloquent violin cadenzas from the concertmaster. Then the pianos joined the great song and the orchestra shifted back to the fast dance music that gives this piece its vitality and energy. They had the last word, playing the memorable and modulating final chords that announce the end of the work, and Gershwin's study and absorption of the musical ideas of Debussy. The experiment was a success.

The concert's opening was the 22-minute Suite that composer Leonard Bernstein constructed from his lone film score: On the Waterfront. Bernstein's music is spare and haunting, with eloquent writing for English horn and low strings capturing the hardscrabble life of Terry the stevedore and his struggle for working man's justice on the Brooklyn docks. The orchestra responded to Nézet-Séguin's urgings, putting meaning and depth into this extraordinary film music, enabling the listener to see the film's gritty black-and-white images as the score unfolded.

The finale was another Bernstein work: the Symphonic Dances from the musical West Side Story. This is effectively a third version of the work for the concert hall only. The dances are assembled not to follow the plot of the movie but in an order that makes the most musical sense. So the buildup of street violence in the overture gives way to an elegaic "Somewhere" and "Maria" is reimagined as a dainty cha-cha. The best moment came in the electric "Mambo" when Nézet-Séguin turned to the bewildered, bejeweled audience and asked them to yell out "Mambo!" On his second attempt, the conductor got the response he wanted. (Reprinted from Superconductor by permission)