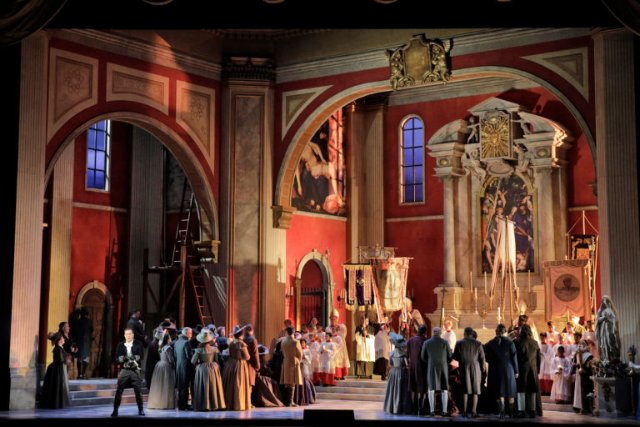 From the time that Giacomo Puccini became an internationally renowned composer with La Rondiné, until his final opera, Turandot, each of his seven full operas showcased eponymous heroines. Although all of these soprano roles sit high in opera’s firmament, perhaps none faces more vocal challenge and offers more breadth of personal development than Tosca. An exemplar of the verismo movement in opera, Floria Tosca’s realism is fully grounded and well realized.

A star attraction on the European circuit, Italian Carmen Giannattasio makes her San Francisco Opera debut and role debut as the title character. The soprano was offered the part earlier in her career, but she declined. The attack on the vocal chords from dramatic vocal styling can be damaging when competing with a loud orchestra playing this opera.

The wait was well worth it, and her debut is a success. She brings the fervor and sonorousness of a dramatic soprano, yet maintains the silkier texture of a lyric. These traits are fully on display in the signature soprano aria “Vissi d”arte,” (“I lived for art”) and throughout the performance. She does not completely fill the shoes of Tosca with the same gravitas and stage command of a Maria Callas, but she has the skills to make it a memorable role in the future.

In the role of Mario Cavaradossi, which has become a mainstay in his repertoire, an equal share of the night goes to recurring visitor, tenor Brian Jagde. From his first light romanza, “Recondita armonia,” (“Concealed harmony”), his performance is stellar. He demonstrates the warmth of voice as his mind blends the contrasting beauties of Mary Magdalene, whom he is painting, and Floria Tosca, whom he loves. And at the opera’s end, he emotes in full throttle “E lucevan le stelle,” (“The stars shown brightly”) reveling in times past of stars and flowers and his love for Floria, but despairing that he will die.

The production is a new one, and it is a classic in the grand style. A distinct set for each of the three acts represents the historic sites in Rome where the story takes place. No combination set. No convertible set. These depictions would be in keeping with Puccini’s wishes, as he strained for accuracy as well as realism in all aspects of the opera. The bells that chime are the same notes with the same timing as those of the actual prison Castel Sant’ Angelo. The chorus’s “Te Deum” is a church melody in use in Rome around 1800.

The action takes place during Napoleon’s quest for world domination, with the artistic Floria and Mario on the opposite side of the political fence from the evil Chief of Police, Scarpia. But the central theme of sexual predation could take place as easily today in the time of the Me Too movement or any other time. Floria rejects but is relentlessly pursued by the unscrupulous Scarpia, who will use the power of his office in every way possible to subjugate his quarry. But rather than physically force her, his tactics are the false arrest, torture, and threatened execution of her lover.

From the opening, when the dissonant chords of Scarpia’s leitmotif thunder like a crashing wave of doom, Tosca is replete with fine music. Composed more in a sing-through fashion than his other operas, its arias and duets flow from the action, yet they are distinct and separable. Ensembles, which are a more contrived and unrealistic device (though often beautiful musically) are echewed.

The storyline is simple but compelling. For the greater part, the production rises to the material, but the first act seems stiff and stalls a bit. The tension does intensify as do the performances. One exception is that Scott Hendricks, otherwise sound and menacing, is underpowered in the lower range. Singing Scarpia’s threatening “Va, Tosca” (“Go, Tosca”), his refrains of her name should boom, but they are overwhelmed by the orchestra. Overall, however, this is a proud and glorious rendering of one of the world’s greatest operas.