Tarred and Feathered in Provincetown 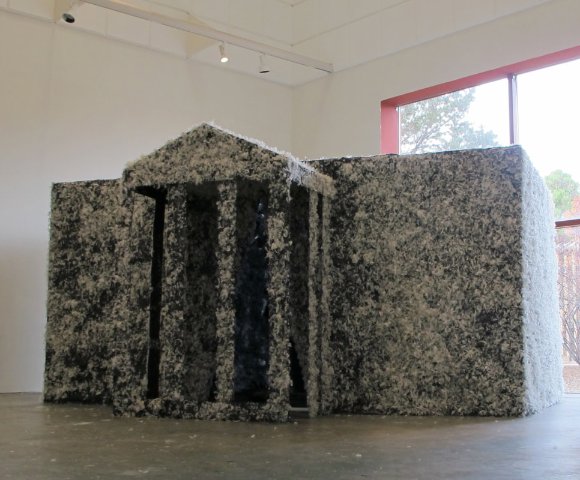 Replica of the White House now tarred and feathered,

Conceptual art installation on Commercial Street in Provincetown, MA at Bubala’s by the Bay Restaurant, October 16-25, 2020.

The public is invited to participate.

The Whiteness House - tarred and feathered, a walk-in scale model of The White House created by Provincetown artist Jay Critchley, will be installed at  Bubala's by the Bay Restaurant, 183 Commercial Street, Provincetown, Ma in a novel art space under its new patio awning. The ten-day outdoor installation will be held from October 16- 25, 2020. Writers, performers, poets and others are invited to submit ideas for daily planned activities. Volunteer to staff the installation are also being recruited.

The artist is represented by AMP Gallery, 432 Commercial Street, Provincetown, where other aspects of The Whiteness House will be on exhibit.

“Our nation’s home has taken on an ominous presence with a white president who has defined much of his Presidency based on color. How white is a Whiteness House after a black President? How does a white house express its whiteness?” states Critchley.

The Whiteness House - tarred and feathered examines race and the politicization of The White House and all of government at a culturally and politically tumultuous time. It was designed and created by the artist at a residency at the Santa Fe Art Institute in New Mexico in 2017 in response to issues elevated by the last presidential election, and now, to continue a community dialogue prior to the November 3 vote.

Tarring and feathering is a form of public humiliation used to enforce unofficial justice or revenge. It was used in feudal Europe and on the American frontier, mostly as a type of mob vengeance. It is meant to humiliate and severely criticize a person.

“We ask, Who is being tarred and feathered – We the American people, owner’s of the home, or the present tenant? Or, is someone else doing the tarring and feathering?” the artist asks.

?The Whiteness House - tarred and feathered sculpture will be open to the public with community engagement and participation. The daily schedule will begin at noon with a community Ringing of the Bells. Visitors will be asked to sign up for fifteen-minute time slots, two at a time, to view the sculpture; only one inside at a time. Masks and social distancing will be required. Times and programming to be announced.

Jay Critchley He is a longtime resident of Provincetown and the shifting dunes, landscape and the sea are his palette. He has utilized sand, Christmas trees, fish skins, plastic tampon applicators washed up on beaches, pre-demolition buildings and selected sites in his work. He is a conceptual and multimedia artist, writer and activist whose work has traversed the globe, showing across the US and in Argentina, Japan, England, Spain, France, Holland, Germany, Ireland and Columbia.

His movie, Toilet Treatments, won an HBO Award and he recently gave a TEDx Talk: Portrait of the Artist as a Corporation. His 2015 survey show at the Provincetown Art Association & Museum traveled to Florida Atlantic University in Boca Raton, FL. He has received awards from the Boston Society of Architects and the Cooper Hewitt, Smithsonian Design Museum in NYC for his environmental projects. The 2020 edition of Provincetown Arts has published his piece, Democracy of the Land: the Moo Moo World.

Jay was honored by the Massachusetts State Legislature as an artist and founder and director of the Provincetown Community Compact, producer of the Swim for Life, which has raised millions for AIDS, women’s health and the community.

He is represented by AMP Gallery in Provincetown. www.jaycritchley.com