French Film About a Trans Child 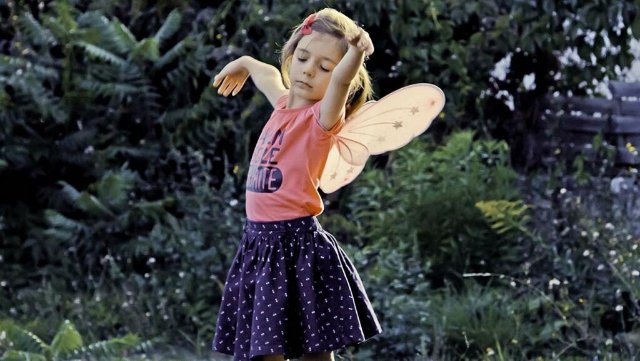 Little Girl, a 2020 documentary about a young French trans girl, would be a good introduction to what it means to feel you were born in the wrong body. It’s an exquisite film, a sweet story of 7-year-old Sasha, who lives in rural France with her incredibly devoted and supportive family. Unfortunately, not everyone around her is equally as understanding.

Her mother Karine tells a therapist early in the film that when her son Sasha was very young—3 or 4—he said, “When I grow up, I’ll be a girl.” A series of family photos shows that for those early years, the parents treated and dressed Sasha as a boy. By the time Sasha is in school, the parents have come to understand that Sasha, who loves dresses, dolls, butterflies and ballet, is a girl in a boy’s body. They ensure she can dress as she pleases at home and whenever she’s with family. They use female pronouns and try to explain to those outside the family bubble how Sasha should be treated and addressed as a girl.

Her school principal, teachers and a particularly cruel ballet teacher make life outside the bubble difficult for Sasha. When Karine explains to the new ballet teacher that Sasha is a girl and will wear girls’ ballet costumes, the teacher says no. “We don’t have that in Russia,” she says and pushes Sasha out the door.

Director Sebastien Lifshitz, who has made many films about the LGBTQ+ experience (Wild Side, Bambi, Open Bodies), has produced a sensitive story of the life of a child who has what is known medically as gender dysphoria. Lifshitz did research on the issue to find the right family and approached them carefully to describe the process. Sasha and her family—mother, father, teenaged sister, older and younger brothers—agreed to participate in the filming and, Lifshitz said, “The family adopted us from the get-go because they sensed that we were like a second protective circle around Sasha.“

The filmmaker allows us to share some moments of Sasha’s joy, such as being able to wear a dress and shop for a swimsuit. In a scene as the family relaxes at the beach, Sasha romps happily in the water with her siblings wearing a two-piece pink swimsuit and a floppy pink sunhat.

The view from outside the insular world of rural France comes from a psychiatrist in Paris who specializes in gender dysphoria. On their first visit to the doctor, it’s clear that she will be helpful to Sasha’s case. The school principal has said his hands are tied; he can’t allow Sasha to present as a girl at school without medical certification. The doctor writes such a letter and Karine gives the validation to the school with mixed results. But finally, Sasha dresses for school in a blue flippy skirt, ballet flats and a ponytail with a pink ribbon.

Her parents provide unconditional love for their daughter. Knowing that Sasha’s future may not always be easy, Karine says, “Her personality will help her, but not protect her. I told her it’s her battle and mine. The battle of my life.”

Little Girl is a sensitively told story, exquisitely filmed. It brought me to tears more than once. See it and encourage others to see it to expand public understanding of the lives of trans children, trans men and women. And because it’s an excellent film.