Scenes from a Marriage on HBO 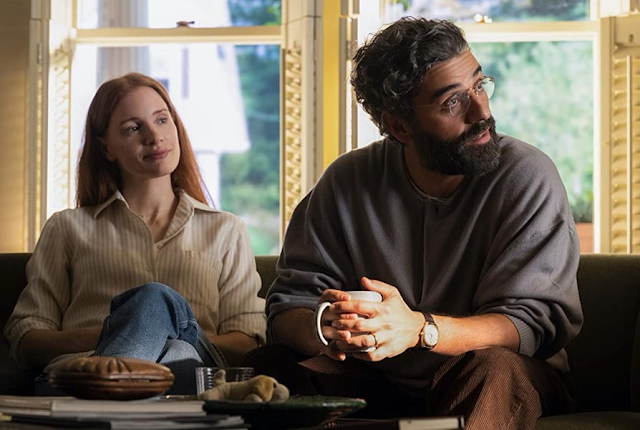 When it comes to original stories made into movies and TV films, about the subject of love and marriage, one would be hard pressed to ignore the angst-filled dramas of the great Swedish filmmaker and writer-director Ingmar Bergman.

Bergman brought to the screen his series of reality-based films about the lives of Scandinavian marriages to insulated uninformed American audiences that didn’t like the feel of foreign films due to their annoying and off-putting subtitles.

Most Americans thought Sweden, Norway, Finland, and Denmark were countries where people were tall, blonde, sexy, and were countries filled with lots of snow and ice during the winter months that made for great skiing and skating but also made for boring weeks where the sun was rarely seen.  Actually, there was a lot more happening in their marriages than we realized. After all, sex is universally practiced and so is its appeal.

The eponymous 2021 movie version currently streaming on HBO platforms stars the always fiercely bold and exciting actor Jessica Chastain as Mira, a shallow, narcissistic, young mother and wife married to Oscar Isaac as Jonathan, a philosophy college professor who rarely challenges Mira when messy home life and workplace confrontations occur.  He prefers the rational approach much like that of a Talmudic scholar in discussions with the ambivalent, passive-aggressive Mira.

We meet them nearing the end of their marital bliss days that are now turning into thoughts of separation on Mira’s part. This is the tipping point in their marriage where the rubber will soon meet the road of reality.  Their marital life has been tedious, slowly paced and is loaded with dialogue that strains one’s credulity and authenticity. For starters, where is Mira’s concern for how she and Jonathan’s actions will forever affect their daughter?

Jonathan has been blind-sided and shell-shocked by Mira’s decision and in her unreal delusional attitude of being a parent and mother. Jonathan suggests they take some time to discuss this, but Mira demurs. Her mind is already made up; she has other plans in her future.

I seriously doubt that many female viewers will embrace the behavior of Mira.  And, yes, the film is not all “sturm and drang”. There are many moments of aching poignancy in Levi’s script about the ups and downs of married life that affect everyone in the film and as well as in real life.

If one had to choose a character in this story to root for, I suspect it would be Jonathan based on his fatherly love and deep concern for Ava’s future. Levi leaves such decisions up to his audience when it comes to choosing one parent over the other.  Regardless, their marriage had all the elements of an impending train wreck right from the get go, but it is not the screaming, drunken, bombastic sort depicted in Edward Albee’s “Who’s Afraid of Virginia Woolf”, but it’s close enough on an intellectual level to claim a ‘civilized’ kinship.

Most of the dialogue scenes are delivered in hushed and whispered tones - so make sure seniors are wearing their hearing aids while watching.  I get the ‘stylistic’ decision that signals intimacy, and as such, demands that the love scenes be spoken in tones that are low and slowly delivered for maximum effect; however, employing that directorial crutch only heightens the glacial pacing even more. There are more surprises and twists in this marital disintegration tale, but no more spoiler alerts here.

I suspect the excesses of our 21st century liberated society influenced this adaptation of ”Scenes From a Marriage”, which resulted in it receiving mixed reviews. After all, the actors are working to execute the writer/director’s vision which they did in highly nuanced tour de force performances.  The talents of Nicole Beharie and Corey Stoll, however, are wasted here. One could make a case that the ubiquitous prop of red and white wine consumed by all (save Ava) has the largest on-screen time in the film.

With respect to the actors, who had nothing to do with the uneven moments in the script, Jessica Chastain and Oscar Isaac are gifted actors and it’s a joy to watch their sublime performances.  Isaac’s “Ex Machina” film about Artificial Intelligence and Chastain’s performances in “Zero Dark Thirty” about the search for Osama Bin Laden, and “The Help” respectively, were breakthrough film performances where audiences and producers took notice.

I can’t wait to see “The Eyes of Tammy Faye”, staring Ms. Chastain as the televangelist partner and wife of disgraced preacher Jim Bakker, that opens in theatres this month.