Per Aspera ad Astra through October 14 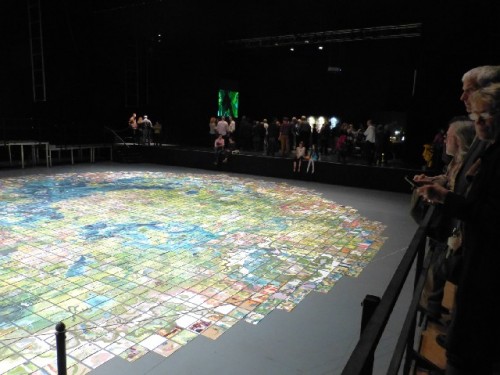 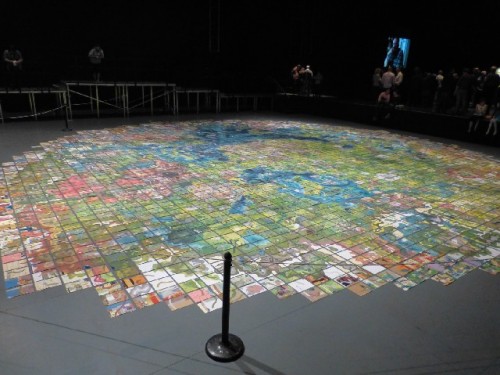 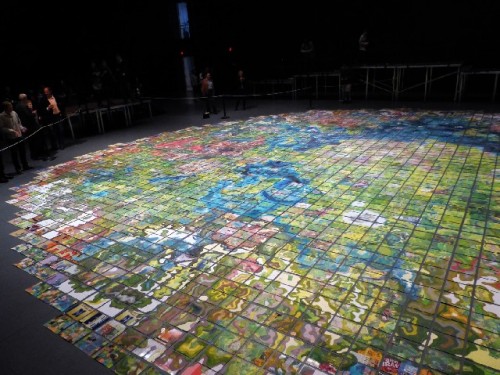 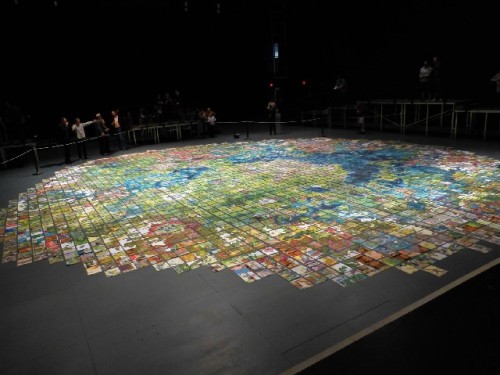 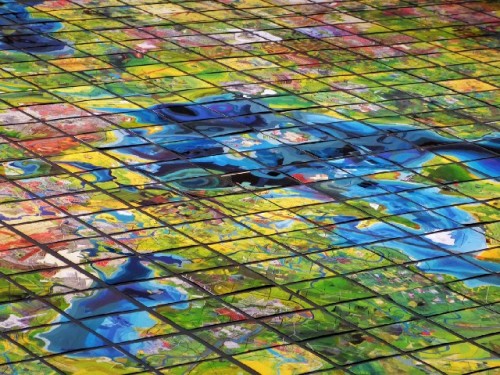 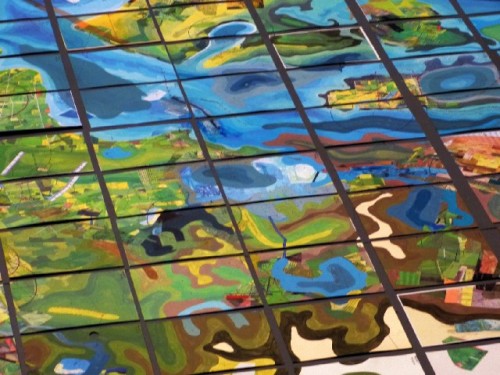 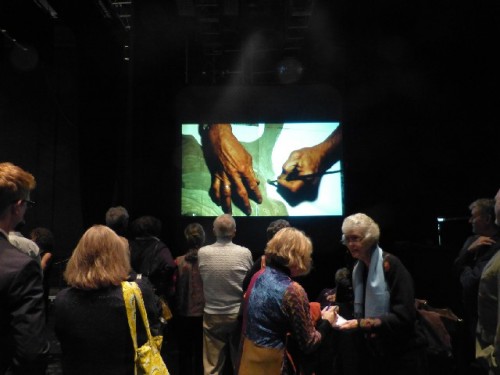 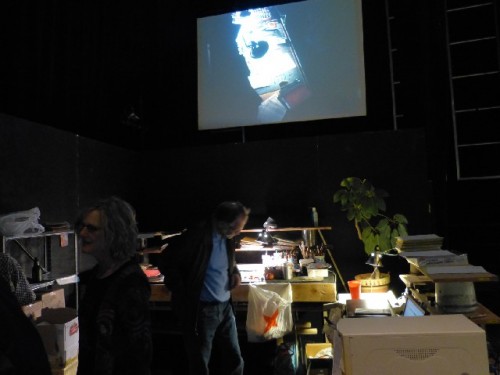 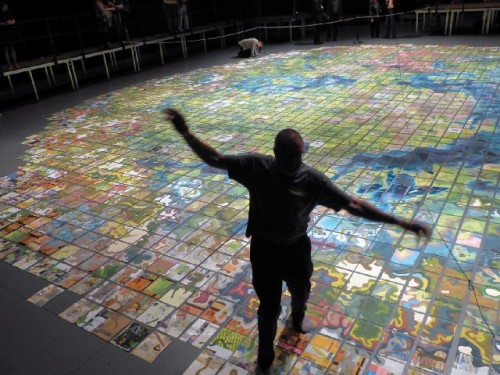 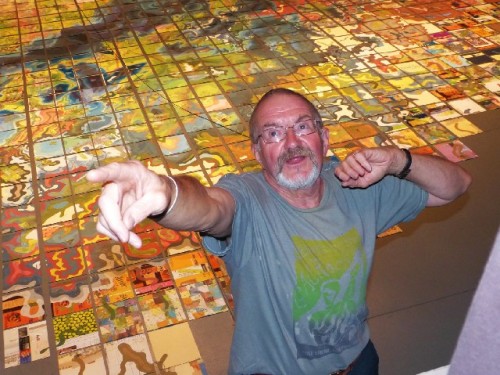 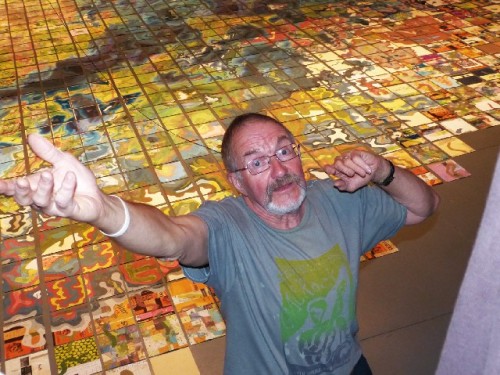 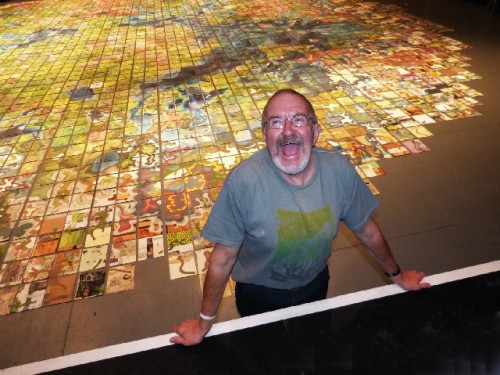 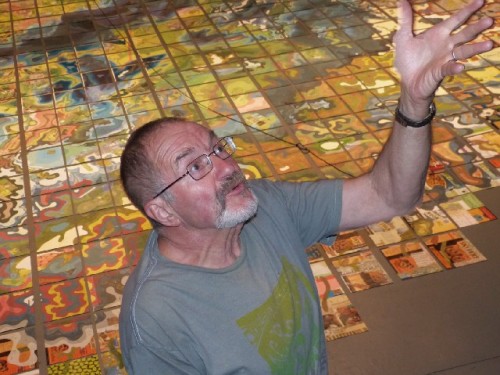 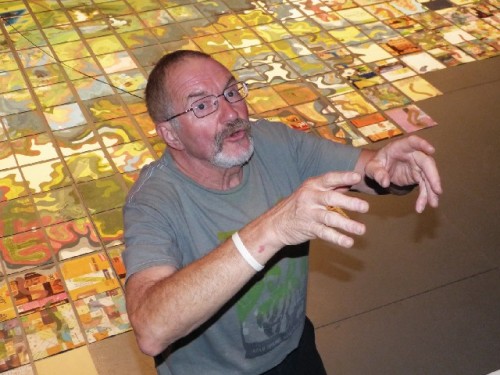 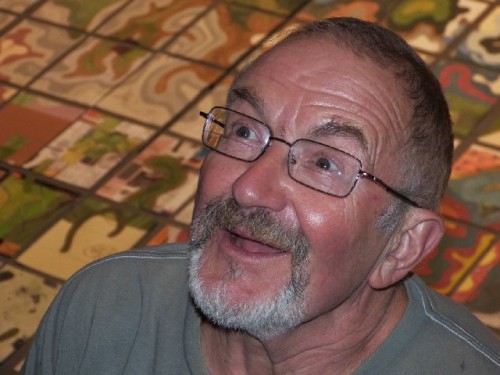 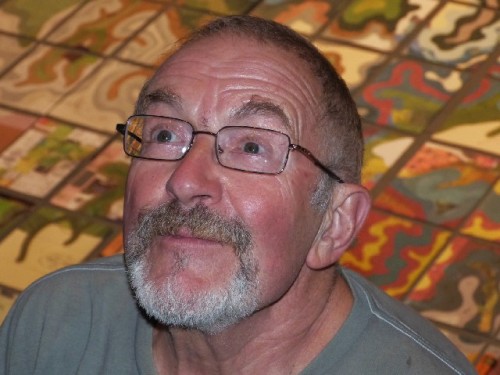 Entering the Hunter Center at Mass MoCA there was a cat walk erected around its perimeter that connected to the stage.

From this vantage point, during the vernissage yesterday, visitors gazed down at the floor and  2,700 panels forming a grid with a narrow spaces between the elements. Seen as a whole its Jerry’s Map an eccentric, obsessive compulsive project that has grown and evolved with fits and starts since Gretzinger first doodled a map with a ball-point pen in 1963.

In the mid 1980s, to prove to a board that he was indeed “an artist,” and qualified to occupy a loft zoned for artists in lower Manhattan, he last laid out the entire piece.

Looking up at visitors, from his position on the floor next to the map, he informed a few of us that the scale of the piece was then just a fifth of what it is today.

He was thrilled to have the work installed at prestigious Mass MoCA. It remains in the Hunter Center, an auditorium that will soon host an evening of the Williamstown Film Festival, for just one week, through next Sunday, October 14.

It represents an enormous triumph for a man who admits having doubts about himself as an artist even though proving himself as one in order to reside in a New York loft building.

Faced with the task of earning a living he assisted his wife in her design and clothing business. This allowed for the cash flow to pursue his interests without pressure to exhibit and sell the work.

There were disruptions along the road that culminated in this mega exposure at Mass MoCA.

At the University of California in Berkeley, in 1963, he invented a dating system specific to the map and began to document populations of towns and districts. In 1964 the Peace Corps assigned him to North Africa. The map, then in embryo form, followed in a trunk six months later. Prior to its arrival he drew maps on the walls of an apartment in Beja, Tunisia.

Fast forward to 2003 when Gretzinger and his son rediscovered the map in an attic. This inspired him, particularly with new technologies including a scanner and color copier. The reformatting process took two years. He invented a system of chance operations using a coded deck of playing cards. This daily “game” and its specific options determines the process of addition or subtraction.

Over the past decade the work in progress has been exhibited widely but never to the full extent in which it is seen at Mass MoCA.

We asked if it is a map of anything?

Not really was the answer. Seen as a whole, however, it suggests land masses separated by seas or passages of water. Examined in detail the individual panels are complex collages of graphic elements. When viewed as a whole they are primarily seen for their colors identifying a suggested topography.

From the Latin word charta, paper, comes carta. As in Magna Carta. The root, carta, forms the word, cartography, the field of maps and map making. From medieval times through the Age of Exploration they were both essential and pragmatic, as well as, aesthetic objects.

In the Christian-centric thinking that preceded rationalism and the scientific revolution maps reflected notions of a world defined by God. The center of planet Earth was located in Jerusalem and splayed out from there. When the limits of the known and explored land and sea were reached the cartographer inscribed, “Hic transit dracones” (Here reside dragons) for oceans, and “Terra incognita” (unknown land) for terrain.

Arguably, mapping is a primal urge for mankind. There is an obsession to know precisely where we are. Hence the furor when the latest IPhone 5 was found to have maps that really don’t work. Or our GPS device tells us to turn right, turn right again, taking us into a cow pasture rather than the highway we are looking for. We watch fascinated as the evening news offers snippets of the robot scurrying about the surface of Mars.

So Jerry’s Map, while vivid and absorbing, is an explorer’s conundrum. While seemingly explicit and imaginative it leads to nowhere. Arguably, we are lost or absorbed in its space.

Or, it is how Jerry finds himself in this otherwise obfuscating universe.

Pick a card. Any card and follow him to Never Never Land.

To boldly go where no one has gone before.

Snacks will be served. Or were last night.

Through Sunday BYOB and vivid imagination.