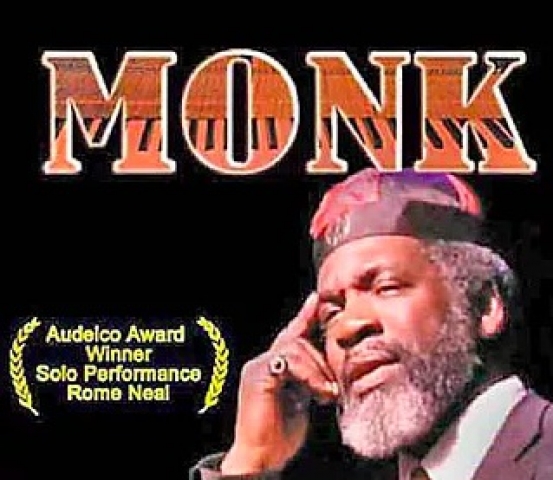 Jazz stays alive at the cozy, unpretentious Nuyorican Café on the first Saturday of every month, but for one week-end, Laurence Holder’s iconic one man show Monk brings the jazz legend to life on its stage. Rome Neal, actor and director, becomes Thelonious Monk.

Through Monk’s tortured internal world, we are taken through the defeats and triumphs of his life and an artistic era.  The fractured and changing world of the post war  jazz scene and social upheavals to which it played a significant overture are brilliantly captured by Laurence Holder's play. Monk is portrayed with authenticity and depth by Neal.

The set is a simple living room: chair, piano and the space in between. This space Neal impressively fills with fragmented recollections in the voice of Monk, a man who in fact rarely spoke. His voice was his music, music which shaped the direction which jazz has taken since he demanded it be heard. Music was in his two hands.

Encouraged by his deeply religious mother, who saw the extraordinary genius in her son, Monk started playing piano at the age of six.  He was a brilliant math student, but it was music that filled his mind. Head strong and ahead of his peers even as a boy, he left New York’s highly competitive Stuyvesant High School before graduation to work as a pianist for  traveling evangelist. By his early 20’s he was the pianist at the renowned Minton’s.

At Minton’s bebop was being born, but it was not accepted. Monk’s innovative approach to the music repelled the jazz traditionalist, the giants of the swing era.  Brushed aside by  ‘the greats’ and ignored by the recording companies,  Monk’s genius did not earn him the success he anticipated.

Monk’s hardships, his artistic struggle and his struggle with illness necessitated faith and loyalty which he found in three strong women who he respected and adored: his mother, his wife, Nellie who had to work three jobs, to keep the family afloat, and eventually his friend and patroness, Baroness Pannonica  "Nica" de Koenigswarter,  a member of the  Rothschild family, who provided a quiet space and comfort for Monk and Nellie in the last years of his life.

Holder and Neal worked on the creation of this piece together, and the staging is seamless. Holder's writing takes us high and low, to quiet moments and anguished ones, but always music is the driving force.

The skillful musical arrangement by Bill Lee creates a subtle scrim which allows Monk to resonate as a whole person: genius, husband, father and friend to many of the bebop greats. Neal's grace as an actor is his ability to fill the stage not only with what we see, but with the realities we are meant to see through his character’s eyes.

It has been one hundred years since Thelonious Monk was born. This play, his anniversary tribute, debuted at the Nuyorican 17 years ago. Since then, Neal has taken this one man drama across this country, and across the ocean to Senegal. One of Neal’s five Audelco awards was for his outstanding portrayal in Monk.

The café has continued to be a clarion for  voices  from the real-world, voices  which are muted by the  mainstream or left unheard in the commercial pressure cooker of success. Today poetry, spoken word, drama, jazz, Latin –jazz, operas, and hip-hop are found within its walls.

Thelonious Monk emerges not only as a major artistic presence but as a tribute to the triumph of the artist in a world which may not be ready to hear a voice which opens new doors. This one man show is about more than one man. You will walk away with a renewed belief that art does live forever.