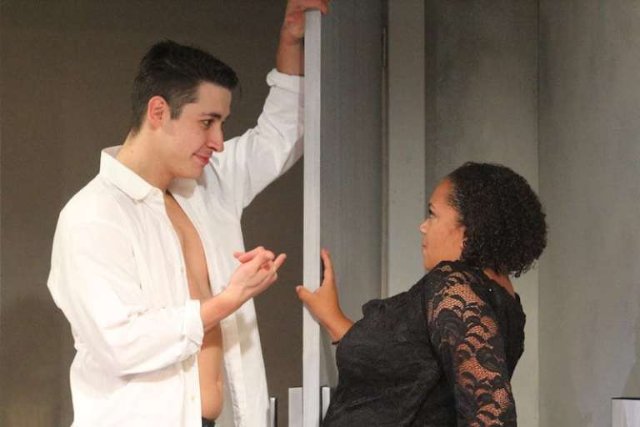 at Zürich  by Amelia Roper is a tantalizing 105 minutes of tension, laced with some smart dialogue. Directed by Brad DeFabo Akin, the play’s five scenes are so cleverly constructed and interrelated that they will keep you wondering until the end, which explains all.

The play begins in a seemingly lighthearted way, with a man and a woman who have spent the night together in a room on the 40th floor of a Zürich hotel. He’s practicing “The Star Spangled Banner,” because he has been assigned to sing tonight at the conference of his bank employer. There’s some disagreement about whose hotel room this is, since they all look alike. The scene ends with She (Sasha Smith) pushing He (Jeff Kurysz) out the door. (The male frontal nudity in this scene is a nice substitute for the usual female nudity, of which there is none.)

Zürich is played by 10 actors—two each in five scenes—set in a luxury hotel room or rooms in that Swiss banking city.  The pair and their interactions in each scene seem to be unexceptional—until they’re not. Elizabeth Wigley as the trilingual Maid, and “official” hotel worker, seems to tie a few threads together. But Zürich is a riff on the classic omnibus drama, where characters who seem to be totally separate turn out to be inexorably linked by time and events.

The intriguing scenic design (plotted in Roper’s script and designed here by Jeffrey D. Kmiec) places the audience as voyeur, watching the action through the hotel room window. The room is designed in minimalist modern white with a clock constantly blinking 00:00.

In another scene, two children, 13 and 11, do what kids do as they wait for their parents to return. Girl (Maya Lou Hlava) tries to boss around Boy (Cole Keriazakos), but then they open their parents’ suitcases and find a Chekhovian surprise.

While her young daughter (Julia Dale/Paula Hlava) plays on the floor, a German woman, Emily (Cindy Marker) spends frustrating time on the phone with various Swiss bank employees. She’s trying to determine what happened to her grandmother’s German bank account, set up in Leipzig in 1937 and transferred to Zürich during the war. The account was never used and her grandmother died in 1941. “What was she doing between 1937 and 1941? Her name was Fryda Spiegel. What do you think she was doing between 1937 and 1941?” is Emily’s chilling explanation.

There’s a lagniappe in scene one—an homage to Leonard Cohen’s song, “Chelsea Hotel.” The male character says he’ll sing it for her. She insists it’s filthy and about an underage girl. He informs her that it’s about Janis Joplin and Cohen, who meet in an elevator and retire to a Chelsea Hotel room.

“I remember you well in the Chelsea Hotel
You were famous, your heart was a legend
You told me again you preferred handsome men
But for me you would make an exception.”

Amelia Roper is an Australian/American playwright, TV and film writer. She works on the Netflix series “Glow.” Zürich, her latest play, opened to rave reviews in May at the New York Theatre Workshop. Her published plays include Big Sky Town, Camberwell House,and She Rode Horses Like the Stock Exchange; her new plays are Everything Is Nice, a futuristic comedy about climate change, and A Duck on a Bike, an autobiographical comedy about grief.

Zürich continues through November 10 at Steep Theatre, 1115 W. Berwyn Ave., just east of the Berwyn Red Line station. Performances are Thursday-Sunday. Tickets are $27-$38 with $10 tickets available for students and artists.