Explores Theme of The Ladies of the Camellias 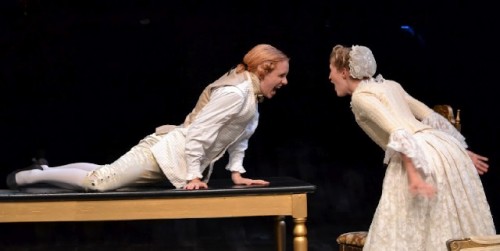 Lauren Lyles as Jean and Katrina Galka as Aurore in the alternative cast of "Portrait de Manon" at B.U.'s Fringe Festival 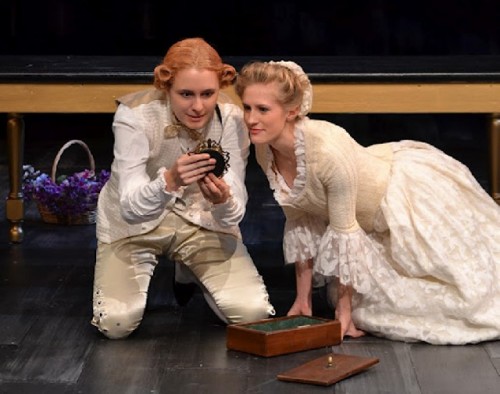 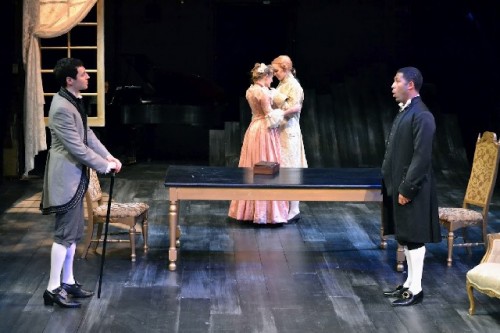 Mark Tempesta as Tiberge and Benjamin Taylor as des Grieux join Lyles and Galka in the alternative cast of "Portrait de Manon." 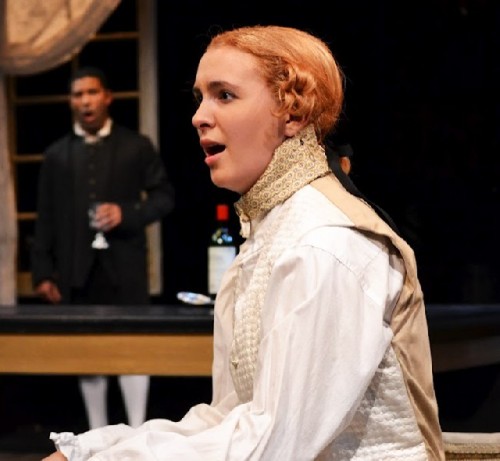 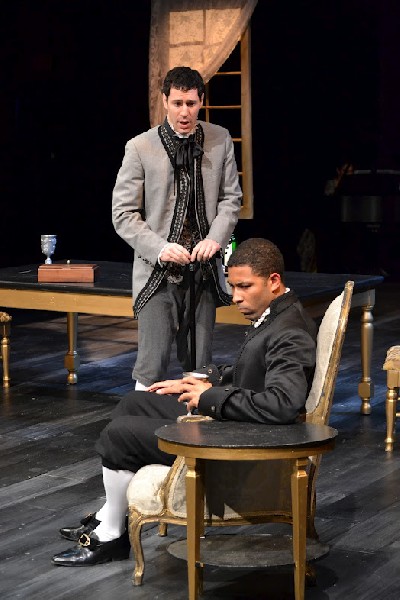 Mark Tempesta as Tiberge and Benjamin Taylor as des Grieux 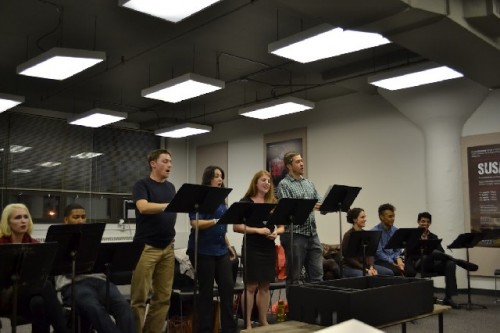 Boston University launched its annual October Fringe Festival on a very high note. Its production of the one-act Massenet rarity, “Portrait of Manon,” was stylishly staged and well sung by its student cast, and the piano reduction of the score seemed perfectly adequate for such a light work.

But first to the festival: Now in its 16th year, the festival, a collaboration between the College of Fine Arts’ School of Music Opera Institute and School of Theater, puts on a series of productions that go beyond the usual student performances. I can’t really talk about its track history, because last year was the first I attended. I was impressed then by the dramatic intensity the young cast brought to Bartok’s creepy “Count Bluebeard’s Castle,” trying to overlook what was lost when his large, late-Romantic score was reduced to piano. Another production of an opera, the name of which I already forget, by genial hack Jake Heggie was less impressive, although well acted and sung.

This year, the festival is organized on a theme, a good idea for any festival. The theme is “The Ladies of the Camellias,” and it attempts to probe how 19th century French and Italian playwrights and composers dealt with the role of the fallen woman. “Le Portrait de Manon” falls a little outside of its rubric – there are no camellias in evidence, but there are memories of gems, fancy gowns and glittering parties with the attendant fall from grace that awaits a woman who sells her virtue for good times and baubles.

Next week, in eight performance from Oct. 13 to 20, the festival lays out its central argument with the play “Camille,” an adaptation of Alexandre Dumas fils’ “La Dame aux Camelias” by British playwright Pam Gems reset in the age of Margaret Thatcher. The Dumas play gave the world the most famous courtesan of modern times, Marguerite Gautier, her only rival Edouard Manet’s cheeky rent girl Olympia.

The final presentation, Giuseppe Verdi’s “La Traviata,” continues the theme with an-ever popular opera based on the Dumas novel. Based on the opera with incorporated elements from Gems’ play, the production, presented October 26 with full orchestra, should fulfill the festival’s experimental purpose.

Back to “Portrait de Manon.” This is not the famous “Manon” by Massenet first performed in 1884 and a staple of the opera repertory ever since. (According to Wikipedia, it had been done 2,000 times at the Opera-Comique in Paris alone by 1952.) This is a short, 45-minute one-acter Massenet wrote 10 years later that never made it into the repertory at all. Although Mascagni’s “Cavalleria Rusticana” and Leoncavallo’s “I Pagliacci” are among the warhorses, it is difficult for one-act operas to make it in a world where impresarios sell tickets for evening-length entertainments. (Although everyone grouses and husbands notoriously fall asleep if they go over a couple of hours.) It’s very convenient that “Cav” and “Pag” together make a perfect evening of Italian verismo.

Unfortunately, there are many terrific short operas that languish. Small companies and music schools can help bring them to our attention, and they do. I have never seen “Portrait de Manon” – indeed, I had never heard of it – and I would be grateful to the festival for putting it on no matter what the results.

Fortunately, the results were perfectly delightful. The production mirrored the lightness of the original text and the student performers in the cast I saw (it was double-cast) were ideal for their roles.

“Portrait de Manon” is set some time after the tragic ending of the original opera. To reprise that story - which was based on a 1731 novel by the Abbe Prevost, also set as an opera by many other 19th century talents, most prominently Giacomo Puccini in his early work “Manon Lescaut” - a young girl named Manon, being met by her cousin Lescaut at a rural inn to accompany her to convent school, chooses instead to run off with the young stud Chevalier des Grieux. Ensconced in a love shack in Paris, Manon dumps des Grieux for a rich nobleman. Manon becomes a treasure passed between rich men but eventually reunites with the love of her life, the disconsolate des Grieux. To keep her in the luxury she has become accustomed to, he goes to a gambling den, where he loses his money, just as the police bust the place, arresting both of them. By virtue of his class, des Grieux beats the rap, but his minx, the charming Manon, is imprisoned, and on the way to a boat that will carry her to a Louisiana prison colony, dies.

In the one-acter, which makes musical references to the earlier work from the opening chords of the overture, the bitter des Grieux is a recluse who keeps a portait of Manon in a wooden box. All through the opera he drinks wine to dull his pain, while peering at her image. He has a young ward named Jean who inadvertently drops the news that he is in love. Des Grieux, fearing love like the black death, violently objects. “How can you deny an 18 year olds’ love?” Jean asks.

Des Grieux’s friend Tiberge enters. He mentions Manon, and des Grieux freaks, saying, “I forbade you from ever mentioning her name.” It turns out that Aurore, Jean’s 16 year-old beloved, is his niece. The two youngsters enter, expecting that Tiberge will smooth the way to their marriage. When he tells them that he has made no headway, they sing a delightful duet, which would play well on Broadway, plotting their suicide, death being their only option. Drowning is rejected because it results in a bloated corpse; ditto poison, because it causes a horrible death; hanging is rejected because the rope will break and then they’ll be ridiculed. Finally stabbing is rejected because Jean couldn’t bear thrusting his saber through his beloved Aurore. (Yeah.) I doubt that Dorothy Parker ever heard this work, but her famous poem, “You might as well live” expresses a similar sentiment.

Finally, the portrait of Manon is discovered and Tiberge is struck by the resemblance between her and Aurore. He plots to persuade des Grieux to change his mind. Dressed in finery Aurore enters; in his drunkenness, des Grieux sees her as a living vision of Manon. Tiberge enters and divulges that Aurore is the daughter of Lescaut, Manon’s improvident cousin, who was left to his care when Lescaut went to any early grave. Des Grieux smiles for the first time, blesses the wedding, and they all sing “How happy we are.”

Music director Alison Voth and stage director David Gately caught the lightness at the heart of the comedy with sympathy, and it was a nice touch that when Voth came forward for her applause she revealed she was wearing the same period costumes as the cast.

The cast was so good that you easily forgot you were listening to students.

As des Grieux, baritone Isaac Bray displayed a rich, well-modulated voice that rose to its few high notes effortlessly. In his few spoken passages he revealed that his French was not yet quite idiomatic, although while singing he enunciated it perfectly, at least to his imperfect ear. A handsome, well-built young man, he couldn’t help but look younger than the middle-aged des Grieux. In a biographical note, Bray, who attended a Christian College in Texas, is recorded as saying that he attempts to “glorify God in every performance.” I have to admit that I am an agnostic about that matter, but he certainly glorified Massenet in his performance.

As Tiberge, Brendan Daly was a vocal delight who also acted well within the limits of his role as a plot facilitator rather than a protagonist. One of this year’s Phyllis Curtin Artists, an award the Opera Institute endows annually on promising young singers, named after the distinguished soprano who founded the program. The opera world is always hungry for tenors and Daly could have a very promising career ahead.

Sonja Krenek was a spirited young Aurore, close to the right age for the role. Endowed with a pretty soprano voice, she hit her high notes with security.

Jaime Hartzell, who sang Jean, was the cover for a singer who called in sick. So she perhaps should be judged with charity. Her voice seemed forced a few times, but as an actor, she inhabited the role comfortably, if not the costume, which seemed a size or two too large. When she was musing about her love for Aurore, she sank into the fauteuil with young passion in a totally convincing manner.

Most student opera productions cover the same Mozart and Britten operas repeatedly. And that’s good for the students, which is what it’s all about. But the Fringe Festival has demonstrated that that formula can be broken with happy results.