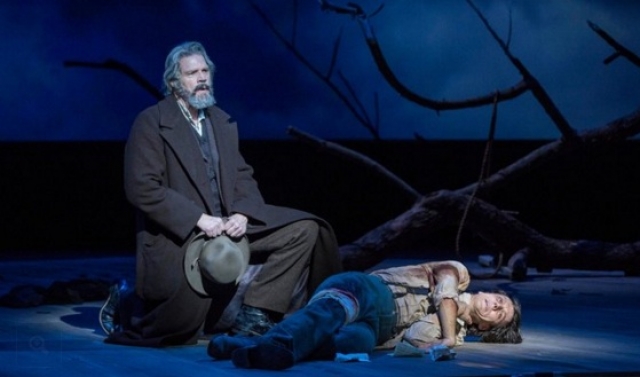 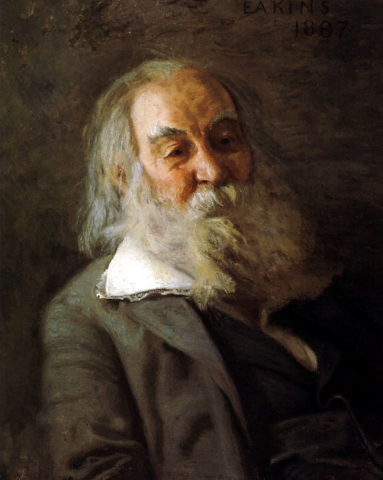 Whitman by his friend, Thomas Eakins. Both men loved opera.

Today we are indeed fortunate to have wonderful singers whose emotional repertoire and styles are as varied as their vocal ranges. Many of them were on stage for BAM’s presentation of Crossing by Matthew Aucoin. The work premiered in 2015 at ART in Cambridge, Mass.

Aucoin is credited as composer, librettist and conductor. Crossing leaves you with the feeling that more cross pollination between the functions might have helped.

The principals delivered. Ron Gilfry, brilliant in the recent production of David Lang’s loser at BAM, again puts on a star performance. He has an even yet emotionally inflected singing line and a rounded tone. Taking on the words of Walt Whitman who he portrays, Gilfry gives rich meaning to his carefully articulated lines. Unfortunately, the character he is left to embody is curiously undeveloped. We get no sense that Whitman was a natural nurse and caretaker. He first went to a hospital on the warfront to tend his wounded brother and remained because he felt he could help. He wanted to be in the actions and passions of his times lest he risk not having lived at all.

How important his sexual preferences were is made dominant in this piece. His consummation of a sexual relationship with John Wormley, an injured soldier who limped into the hospital, is abruptly introduced and unsatisfying, as it tries to answer the question posed at the beginning of the opera:  What is it then, between us?

Aucoin does set music well in the human voice and Gilfry made the most of his portrayal.

As John Wormley, Alexander Lewis cuts a complex figure. He sings with masterful control of the dynamic, making us ache for his wounded condition. His emotional pitch, which twists and turns in just the right places, is perfectly timed. While sometimes ugly, he is the most sympathetic of the principals, because he is very real. He takes you on his journey with conviction and in beautiful tones. He has the unfortunate task of passing for a Northerner in his natural accent, and then returning to his Southern roots in a fake one. Difficult and awkward body movements caused by his injuries were executed so well one accepted them without a moment’s hesitation.

Davone Tines is a startlingly good bass-baritone. As a runaway slave, he is forcefully present coming forward through the ensemble group. He stares us down with eyes and voice.

Just weeks ago mezzo soprano Jennifer Zetlan was cavorting with Tyrannosaurus Rex at the Natural History Museum. Now she takes on the role billed as Messenger. She sings in clarion brightness that sounds sometimes like reveille, and at others like an angel. She gets to announce the end of the war that mustered five million Americans, brothers fighting brothers.  Six hundred thousand died.

Diane Paulus is a cold director.  This can work, but not in Crossing or Porgy and Bess for that matter.  Dancers seem irrelevant and out of place. Projections on the rough-hewn walls of the hospital where the action takes place also are awkward.  The end scene is out of Waiting for Godot, a curious choice.

The music has some lovely harmonies, but by and large is a series of bass groans from which arpeggios rip to divide emotional moments.

While it is too bad that more enthusiasm can’t be mustered for this piece in which both music and story are repetitive and flat, the singing was glorious. BAM offers us this treat in the Howard Gilman Opera House in Brooklyn as part of the Next Wave Festival.