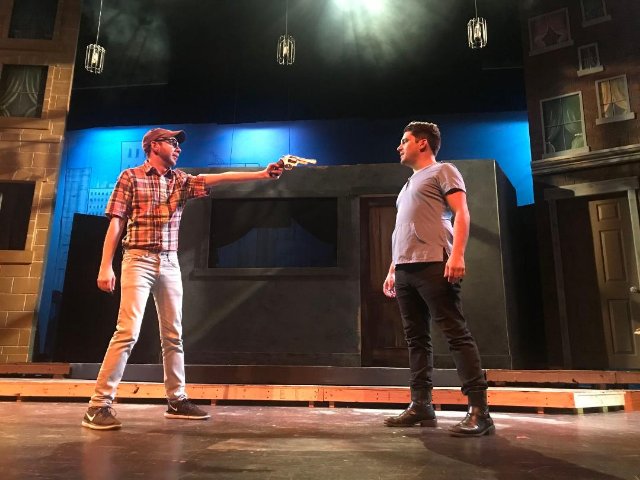 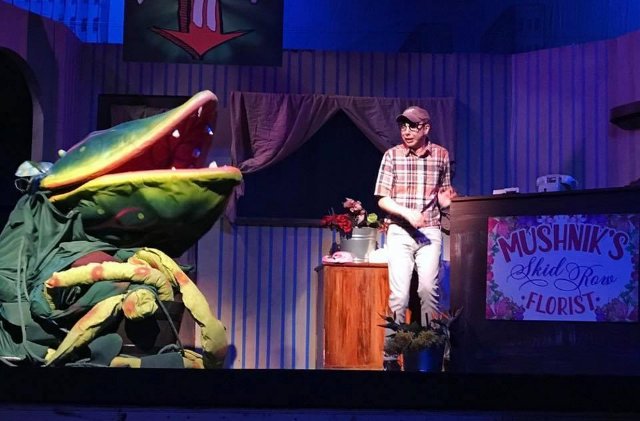 Indeed, this satiric sci-fi parody of bad horror films from decades ago is a hoot of an escapist musical-comedy. It leaves you feeling as gleeful and satiated as the human devouring-plant after finishing his, um, meals.

That is, if a theater company stages the show the right way. Mostly, the two-year-old Boca Raton-based Lightning Bolt Productions has created a laughfest of a production. It runs through Oct. 14 at the West Boca Performing Arts Center.

First, double credit must go to Andrew Shultz. He nails the multiple emotions that Seymour experiences. Also, he fully embodies the character and directs the production.

Shultz’s direction wisely aims for and acheives over-the-top comedy, while keeping room for some subtlety.

One might wonder: Why leave these lines in, with the MeToo movement on a steep rise — especially in the wake of Judge Brett Kavanaugh’s confirmation to the U.S. Supreme Court and allegations he abused women?

However, directors are increasingly axing or softening the impact of these scenes – reflecting a society that’s looking to empower women and leave abuse and belittlement in the past.

To be sure, Shultz hasn’t made Audrey’s abuse stand out. For instance, the black eye that Scrivello gives Audrey, his girlfriend, isn’t nasty.

In fact, the bandages with which Seymour covers the tips of his fingers after pricking himself look more real.

Of course, the carnivorous plant is literally out for blood. Surely, these days, many have adopted that mentality. Divisiveness, fighting and, well, bad blood largely defines society today.

Seriously, given an “Audrey II” (Seymour’s name for this strange plant), folks these days might wonder just how much room is in its stomach. Perhaps, they could satisfy the plant’s cravings by feeding Audrey II those with whom they’re feuding?

OK, that might amount to lame humor. But one cannot say the same for the material in Little Shop of Horrors. Besides it’s obviously outrageous premise, part of the humor stems from Seymour’s obliviousness to his eccentricities.

However, deep down he’s a kind, caring person. That is, even though he’s a murderer, having fed Audrey II just about everybody in the show. The seeming contradiction within this Monty Navarro-like character raises issues such as the hunger for celebrity, ambition and taking justice into one’s hands.

While Seymour is lovable, he has evil tendencies, like we all do.

To his credit, Shultz Seymour isn’t overly sentimental. Rather, he suggests a wide-eyed, over-eager, unabashedly content and nerdy, but nice individual. Sure, Shultz’s Seymour is a klutz. But he’s pretty handy with the show’s patter songs – tongue- twisting, rapidly sung soliloquies during which a convincingly conflicted and indecisive Seymour (picture Hamlet) thinks out loud in song.

Meanwhile, the actor endows the character with a touching gentleness during tender songs such as “Suddenly Seymour.”

Curiously, Shultz employs some questionable staging. For instance, at the very beginning, Seymour’s far upstage while singing about his past. During such moments, he needs to be highlighted.

There’s palpable chemistry between Shultz and Jessie Hoffman as Audrey. Speaking of her, Hoffman avoids the trap of turning the character into a stereotypical caricature of a ditzy blonde. While there’s an airheaded quality in her voice, Hoffman injects
humanity into the part.

Audrey’s main obstacle is Scrivello, whom Jonathan Cabrera plays with an unpredictable quality that will keep your eyes and ears trained on him. Cabrera’s hilarious Scrivello is showy, seemingly suave, but with
a hair-raising menace, especially during stage whispers. Picture a rougher, more primitive Elvis-like persona.

Then, if you will, imagine an exasperated Tevye, looking up and pleading with God. This might give you an idea of Peter Librach’s Yiddish-inflected Mr. Mushnik, a cross between Tevye and Max Bialystock.

Meanwhile, Chase Stante has the perfect R&B, booming, versatile voice to sing the part of the plant. It’s an alien from outer space intent on taking over the world — reflecting fears that, with developments in the political sphere and elsewhere, our own world is endangered.

The plant’s first words, “feed….me…” are relatively quiet, enough to produce a gasp. But just as Audrey II grows over the course of the show, so, too, does his voice grow louder. Stante see-saws between a high and low pitch. In addition, he transitions seamlessly between desperation and a mocking tone. However, the plant’s voice isn’t always in sync with the puppeters’ manipulation.

To start the show, a Greek chorus-like group of young ladies get our toes tapping. The wide-eyed, playful and energetic trio, Annaya Osborne, Alexis Robinson and Sorangel Munoz, nicely blend their voices.

Throughout, they provide tongue-in-cheek, sung commentary and serve as back-up singers.

Stage fog, as well as lighting designer Jayson Tomasheski’s blend of red, green and purple add to this non-realistic aura.

Despite some staging and sound issues, score Lightning Bolt’s production a success. Judging from this and its imaginative mounting of Into the Woods, this is a blossoming company that’s sure to experience continued success with each new production.