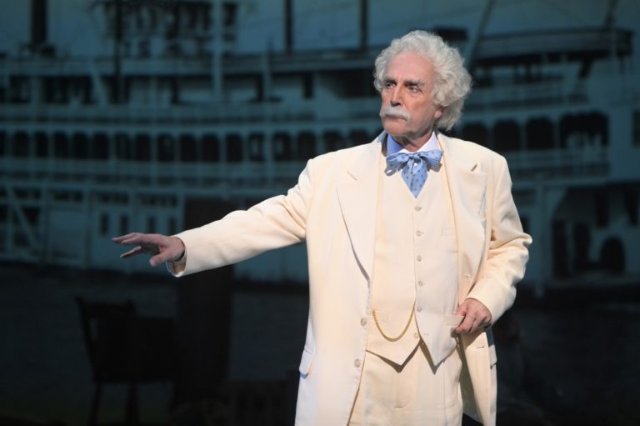 The Mississippi River is the great American watershed, providing water for crops and people, and draining an area equal to 40% of the continental United States. It is our literal and figurative east-west divide. Several important cities rest on its banks, and historically it has been a vital mover of commerce. Humorist and author Mark Twain is the greatest chronicler of the mighty river, telling the social history of the nation’s heartland through life on the Mississippi.

.Playwrights Randal Myler and Dan Wheetman honor the river and its most famous denizen with a theatrical music revue set in the 1800s. The connective tissue of the 20 plus songs in the river odyssey is comprised mostly of monologues delivered by Dan Hiatt who plays Mark Twain at 80 years of age. He hobbles around the stage delivering quips and anecdotes taken from Twain’s actual words, in his novels, essays, and lectures. Hiatt adroitly captures the look and comic timing of the author.

Twain and an ensemble of five singer/actor/instrumentalists impart the story of the river and its people. We learn of the steamboats that plied the Mississippi and which Twain briefly worked on before leaving to become a writer. We also learn about the way of life of those who lived near the river’s banks, from the lumberjacks in the northern forests, to the farmers in the mid-country plains, and finally the slaves in the southern reaches. The stories are depicted by a plethora of informative historic images projected on the stage’s back wall.

The music is a compendium of Americana – traditional folk songs of the era supplemented by original pieces in compatible genres written by playwright Wheetman, who also triples as one of the ensemble performers. Many viewers will find nostalgia in at least a clutch of familiar tunes that left their mark in the rock/pop and folk revival eras. Among them are “Wish I was a Single Girl Again” and “Stackolee,” which has taken on numerous variants, most popularly Lloyd Price’s 1958 “Stagger Lee.” But the renditions performed in more original period style may leave you wishing for the versions closer to those you are more familiar with. Another popular musical entry is “The Wild Lumberjack” which shares the same tune as the more famous “Streets of Laredo.” As an aside for the aficionado, a Folkways Records album with numerous artists includes not only those two songs, but the album’s title song, “The Unfortunate Rake,” which is the source of those two. Several other variations of the same music set to different lyrics appear as well.

An ensemble of five performs the musical numbers, some playing multiple instruments, all from the period of the revue’s action – acoustic string instruments, harmonica, and washboard. Remaining male ensemble members are Tony Marcus, Rondrell McCormick, and Chic Street Man. The sole female is Valisia LeKae, who brings wonderfully sweet voice as a foil to the men.

At the play’s opening, Mark Twain advises that if attendees are looking for meaning, moral, or plot from the evening’s entertainment, they’re in the wrong place. The forewarning is apt, but along with those mostly missing characteristics are inflection points that could lift the production. Although the music and humor and stories resonate and entertain, they flow on an even keel, lacking much audience clapping and foot stomping or raucous laughter or tear jerking that would intensify the audience’s engagement.  But as a musical revue and a mostly fond look at social conditions of the heartland in the last half of the 19th century, this will certainly fill the bill for many.

The most sustained, attention-garnering number is a substantial and well-acted set of excerpts from Huckleberry Finn that does contain the traits that Twain said would not appear on the stage. The novel was novel in confronting racism and slavery by humanizing and evoking sympathy for the runaway Jim. As Jim, McCormick captures the wrenching hope of a better future in the northern states. LeKae, a black woman, plays the white boy Huck, and the viewer happily suspends disbelief, as she thoroughly convinces playing the role of the youth as he breaks away from the constraints of convention. They reproduce the escape from the fictitious town of St. Petersburg, Missouri, rafting down the Mississippi, wide-eyed and reveling in the beauty of the world and of freedom.

Mark Twain’s River of Song, written by Randal Myler and Dan Wheetman is produced by TheatreWorks Silicon Valley and is performed at the Mountain View Center for the Performing Arts, 500 Castro Street, Mountain View, CA through October 27, 2019.