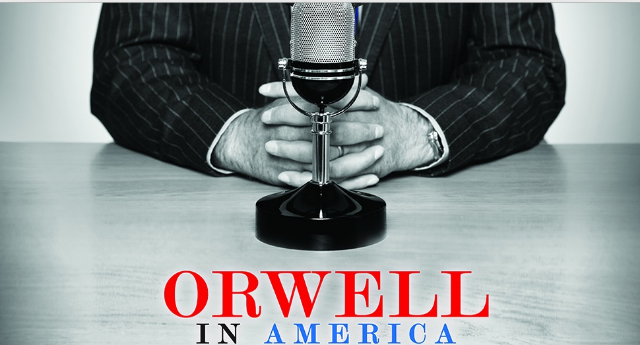 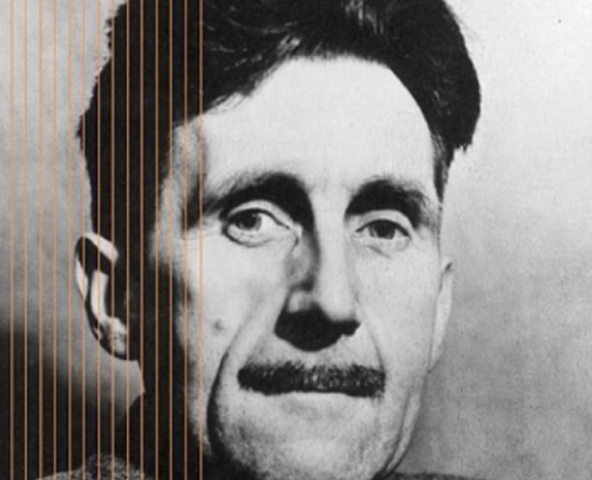 George Orwell never visited America, but he had feelings about how we governed the nation and the texture of our economic life.  If Al Capone had been an Englishman, Orwell wrote, he would never have gone to jail just for tax evasion.  Yet Orwell approached our youthful enthusiasms with praise.   He had read Henry Miller's Tropic of Capricorn and said that although American English might not be by the traditional book, it had much life to it.

Playwright Joe Sutton creates a George Orwell who does visit America. Much is made of Orwell’s birth name Eric Blair and his so-to-speak stage name. But the heart of the man remains very much the same.   He went to Eton on scholarship.   Scholarship boys are always challenged. They are not to the manor born and often struggle to conform.  Director Peter Hackett brings off this complicated but always engaging man with subtlety and charm.

Sutton writes Orwell's twisting moment to moment.  Jamie Horton is magnificent in the role. Orwell’s discomfort, loneliness, humor and passion are all developed before us in language that is very much the author’s. It is lively as well as precise.

You sense that Sutton and Horton have collaborated on this role. The words sit so well in the author’s tortured soul. The moves easily from deep despair to subtle wit and humor are accomplished both in gestures by Horton and the words of the playwright.

The playwright has proposed a book tour in America for Orwell. Animal Farm has just been published. A stunning 300,000 copies were immediately sold and 1984 is about to come out.

A hundred years before, Dickens had toured America to promote international copyrights. His works were regularly being pirated in America.   He had a delightful visit with my relative who ran the Perkins Institute for the Blind in Boston, but as he roamed America, he became exhausted by the attention. While Orwell never seems exhausted, he seems very tired of being called a communist, and Carlotta, the publicist assigned by his publisher,  has difficulty explaining post War America.

Orwell has a concept of socialism which is way beyond the understanding of most post World War II Americans. Everyone who says the "s" word gets dumped into the communist bucket as Red scares raise their ugly heads.

With the death of his wife Eileen O'Shaughnessy, Orwell unhinged and proposed marriage to every woman he met including Carlotta, who is conducting his book tour on behalf of the publisher, Harcourt Brace, in its golden, pre-Janovich days. On eBay you can spend between $15 and $5000 for a copy today.

Cigarettes and booze help nail the time in this piece.   The character of the book tour publicist feels contemporary. In the late 1940s, Helen Honig Meyer had not been made publisher of Dell. Grace Shaw’s ascendancy at Bobbs Merrill was decades away.

The Carlotta character might be better drawn as Katherine Hepburn. Carlotta seems a bit too contemporary Sarah Jessica Parker.

In a delightful insert Orwell explains the difference between rationing in England and America. For us, we got less. In Europe, citizens got almost nothing. We suffered few civilian casualties in the Second World War while Europe was devastated.

Students study Orwell in school. A joke is made about Animal Farm sounding like Charlotte’s Web. Yet Orwell is portraying a very grown-up period of Stalin and his totalitarian regime.

We end with “All Animals are equal, but some animals are more equal than others.” This could well be the theme of the 2016 election cycle.