Opera at the Apollo

We Shall Not Be Moved Triumphs 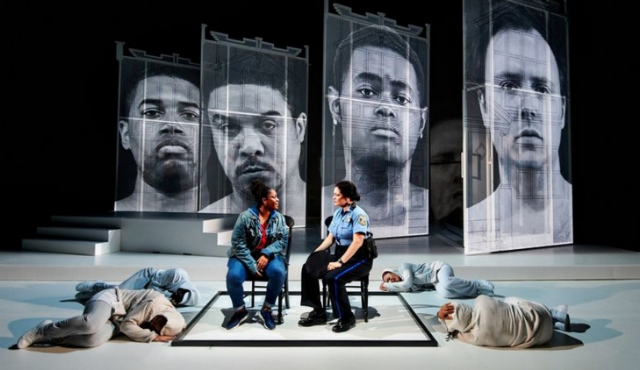 We Shall Not Be Moved at the Apollo

Opera Philadelphia has successfully reached into the community around them to provide new operas on subjects that are of interest to uninitiated opera audiences. Not only has location been a draw, such as a warehouse for a fantastic opera on Andy Warhol, but subject matter has also been addressed. The question: can you draw in new audiences if you mount an opera whose subject matter is of interest to them? The answer is a resounding yes. While opera audiences may not have gone to see a re-creation of Egypt in Aida or artists in a Parisian garret in La Boheme, new audiences want to see reflections of themselves on stage.

Opera Philadelphia co-commissioned We Shall Not Be Moved with the Apollo Theater of Harlem. They had previously collaborated on an opera about Charlie Parker, Yardbird, in which Artistic Advisor to Opera Philadelphia and Metropolitan Opera star Lawrence Brownlee was featured in the title role.

We Shall Not Be Moved opened at the Apollo last weekend. Under the bright lights of the Apollo marquee on 125th Street in Harlem, the gathering crowd was dressed in high fashion, from tinsel and glitter to designer jeans and platform heels. Talk was all of the subject matter and the artists who had created this opera. Bill T. Jones is well-known, but the composer and librettist not so. However, everyone knew Daniel Bernard Roumain and Marc Bamuthi Joseph were people of color reflecting the community in which they performed.

Did this opera satisfy? Without a doubt. Interestingly, although at an earlier production in Philadelphia the audience had been invited to respond out loud during the performance, they did not. That opening night audience was largely older people  although it is easy to imagine John Waters screaming.

At the Apollo opening, there were some loud reactions at the beginning of the first act, but the audience quieted down, rapt for the rest of the evening.

The subject matter is sobering. A young man who survived 9/11 was there because his father had taken him from Washington DC to Philadelphia to see what has become the opera's setting: the block burning in 1985. He now works for the I Have a Dream Foundation. The unfolding moments were part of his remembered history.

The production at the Apollo was different from that at the Wilma Theater in Philadelphia. The shallow stage meant that the chamber musicians were tucked into a corner of the orchestra at the Apollo. Instrumentalists felt more connected to the production in this position.

The sound technician from the Wilma Theater had been exported to New York. He provided 30 microphones on stage and made sure that they were targeted and had low-end frequencies, so amplification seemed quite natural and was limited one-on-one to a singer. When the police officer tries to reach out for help, her signal deliberately crackles.

The composer has provided for synthetic sounds in the bass and these too were integrated into the show successfully.

The orchestral ensemble on stage in Philadelphia cut some options for silhouetted dancing and freeze frames. At the Apollo, one particularly dramatic moment looked like an end scene from an Ingmar Bergman film in which the characters march across a distant horizon. Here they feel very present and gestures convey the drama.

Each and every one of the cast deserves a call out. For some reason, perhaps more familiarity with a new work, some singers who were less effective in Philadelphia stood out here.  Lauren Whitehead, who is UnSung,  sang very beautifully as the den mother of a group of young men. In dialogue with the Kristin Chavez, an Hispanic police officer, who was marvelous in the premier, the women are very much equals.  This gives heightened impact to the sung statement, “Don’t call me honey, Officer Ramos. My name is Alicia. But you can call me UnSung. And I’m no longer asking you for permission.” Alicia/UnSung is wielding the officer’s gun.  She who has the gun has the power.

It was more touching to have the audience respond with respectful yet thoroughly engaged silence. They were reached in the right place. Instead of rebuffing uncomfortable feelings with noise, they took them in. This is opera’s power to change. When the Italian government cut off financial support for opera, Riccardo Muti, stopped a production of Nabucco and had the audience sing along with what is regarded as a national anthem, Va Penisero, a moving choral moment in the opera.

Performances by the cast in We Shall Not Be Moved also include a standout from John Holiday, the counter tenor who drew rapturous reactions.  All of the Johns, for each member of the core group of young men is named John, sang with deep feeling and lovely phrasing, even when the subject matter was as dark as dark can be.

The ghosts of the past are at first represented by dancers in white who move about the present action. The Johns become the ghosts after the fire immolates them.

The issues of the relationship between law enforcement and American citizens of color are at the center of We Shall Not Be Moved and you can not leave the theater free of their clutch.

This opera travels next to Europe. It should tour throughout our country and the world. It  reveals the emotional texture of current events.  We can begin to understand what is going on in race relations in the US and hopefully encourage action. We Shall Not Be Moved is terrific musical theater in the tradition of opera.