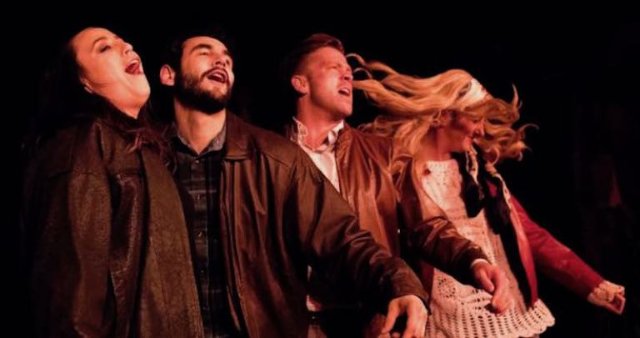 Tom Stoppard stirs up his personal brew of European political ideology, love, death and pop culture in his 2006 play, Rock and Roll, now on stage in a stirring production at the Artistic Home Theatre. The only Stoppard themes missing are science and technology (for which, see The Hard Problem or Arcadia, or any novel by Richard Powers, the Tom Stoppard of novelists.)

Kathy Scambiatterra directs this complex political/musical story, based on the Czech music fans and political dissidents in the years between the Prague Spring in 1968 and the Velvet Revolution of 1989.

As the play begins, it’s 1968 and Jan (Julian Hester), a graduate student, is leaving to return to his home country of . He’s leaving everything behind, taking only his records with him. He visits Max (H.B. Ward), a Marxist Cambridge professor, and Eleanor (Kristin Collins) to say goodbye. Of course, Jan and Max argue about Communism. Jan is returning because of the Prague Spring and Alexander Dubcek’s leadership (his slogan is “socialism with a human face”). Max insists Dubcek isn’t a Communist and says to Jan: “I’m a Communist, I’d be a Communist with Russian tanks parked in King’s Parade, you mummy’s boy.”

Eleanor, suffering from advanced stage breast cancer, is a scholar of Sappho and “I had Amazons in my doctorate.” Now she is an Amazon, with one breast lost to cancer.

Jan and his friend Ferdinand (Raphael Diaz) argue politics and discuss music. The Beach Boys have just played in . Jan plays the Doors, Pink Floyd and Velvet Underground from his large collection and invites Ferdinand to tape anything he likes. Ferdinand wants Jan to sign a petition but Jan came to “to save rock and roll.”

The years pass, with date cards printed on 12-inch record sleeves establishing each scene. In 1976, Jan, who has been imprisoned, comes home to find his records smashed and their jackets ripped. (This scene made me gasp.) At Ferdinand’s insistence, Jan does eventually sign Charter 77, a petition by Czech intellectuals to demand basic human rights. At the end of the play, it’s 1990. The Berlin Wall fell in 1989 and freedom is in the air. Esme (Kristin Collins), daughter of Max and Eleanor, goes to with Jan. They visit the Lennon Wall and in the final scene, they attend the Rolling Stones’ first concert in .

The Czech band, Plastic People of the Universe, is an important element in Rock and Roll. The band played throughout this period and members were often arrested. Although their frontman died in 2001, the band continues to perform. Its last album was released in 2009. When Rock and Roll premiered in in 2007 at the historic National Theatre, Plastic People performed before and after the play.

Rock and Roll is performed with traverse or alley staging and gallery seating all around the performance space. Scenic design is by Kevin Hagan with costumes by Zachery Wagner, who should also get credit for the era-defining men’s hair styles, ranging from long and shaggy to cropped ‘80s styles. Mark Bracken is the sound designer; the music defining the era plays throughout. The walkin tracks include the Fugs’ “CIA Man” and Lou Reed’s iconic “Walk on the Wild Side.” Pink Floyd, Syd Barrett, the Fugs, Dylan and the Velvet Underground are heard throughout the play.

Stoppard acknowledges that Jan to some extent represents his own story. In an early version of the script, Jan’s character was named Tomas, Stoppard’s given name. In his introduction to his 2006 script, he also notes the influence of Milan Kundera’s The Unbearable Lightness of Being and the work and life of Vàclav Havel.

The title of Stoppard’s play is not so much a paean to my favorite music as it is a symbol of freedom itself. Political freedom, freedom from censorship and repression. Rock and roll has represented that freedom since its early days when it was banned from radio play, when parents tried to censor their children’s music choices. And most powerfully, when famous rockers took their music to sites of repression, like . Some writers believe Bruce Springsteen helped bring down the Berlin Wall because of his concert before 300,000 people in in 1988. (Yes, I’m a fan.)

Rock and Roll continues through November 18 at the Artistic Home Theatre, The performance runs almost three hours with one intermission. Performances are Thursday-Sunday. Buy tickets for $34 or $20 for students and seniors. The theater has created a Rock and Roll Timeline sheet for the playbill. Take a few minutes before the play begins to familiarize yourself with the people and dates that are part of the story.