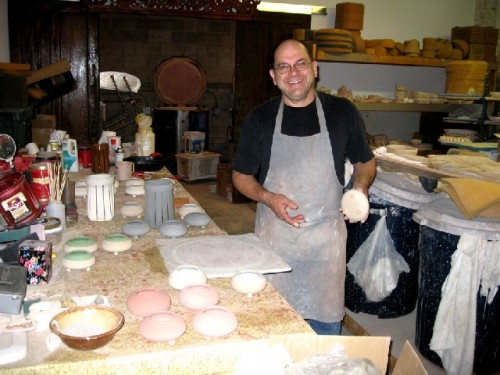 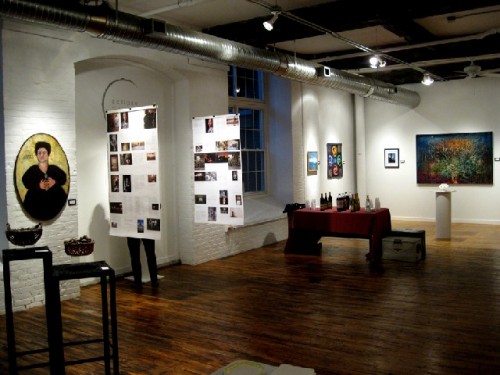 A view of the Annual exhibition. 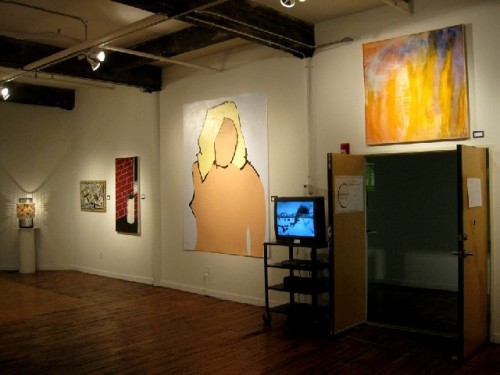 Seen from another angle. 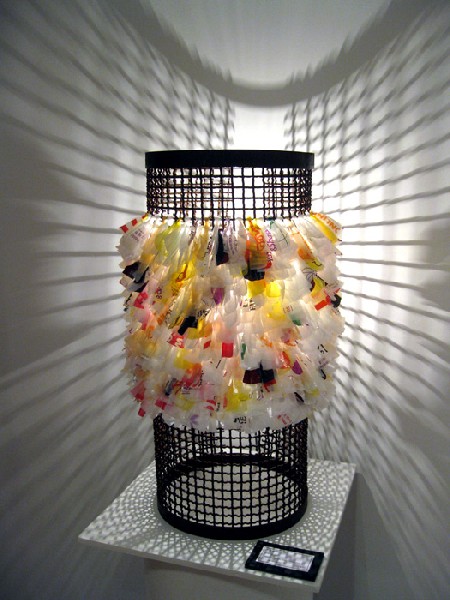 A light work by Brian Jewett. 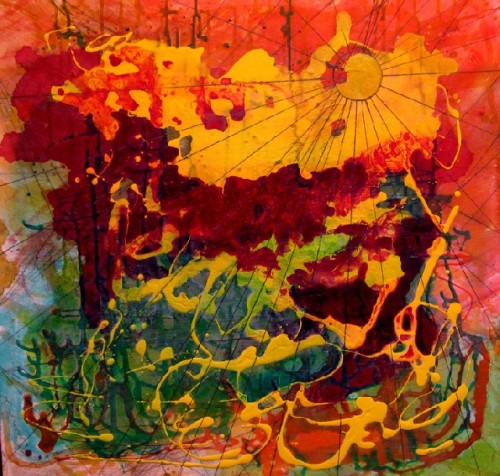 Dawn Guild’s "Sighting of the Sun." 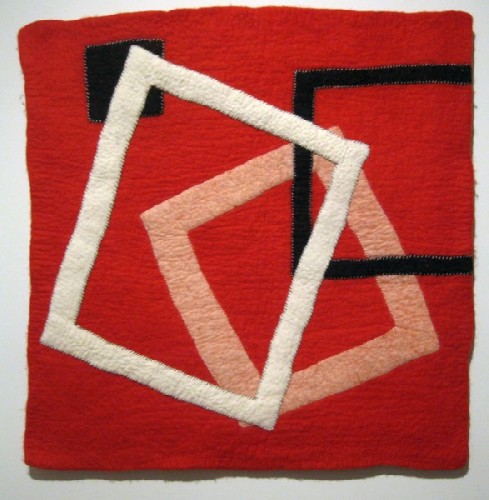 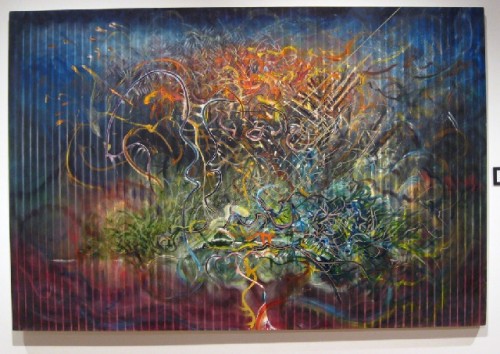 An untitled painting by Rick Harlow. 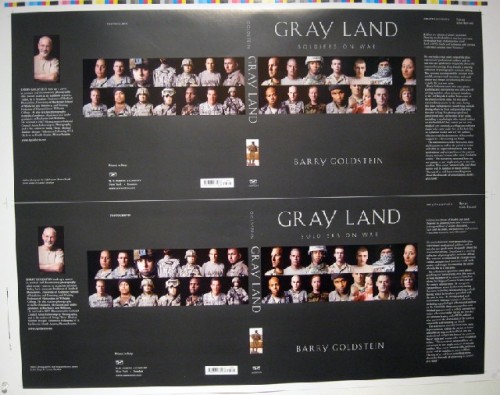 Proof for a book of photographs by Barry Goldstein. 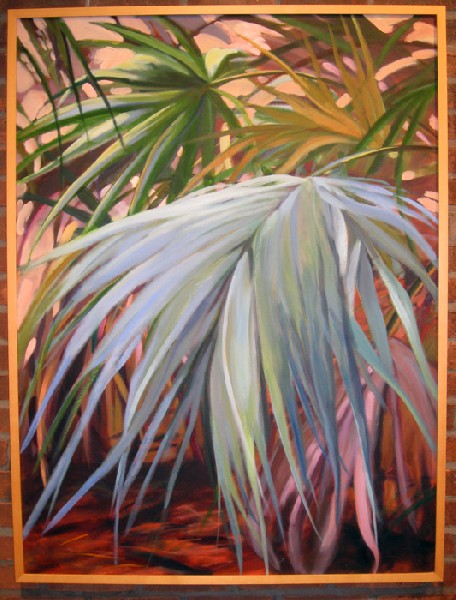 The painting "Blue" by Susan Graber. 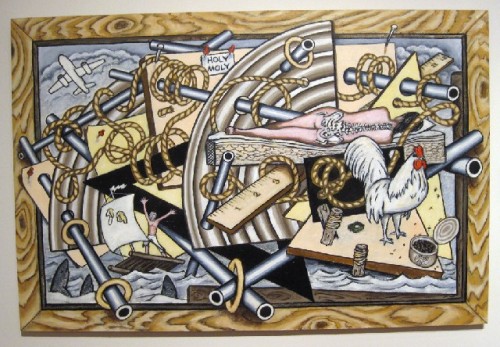 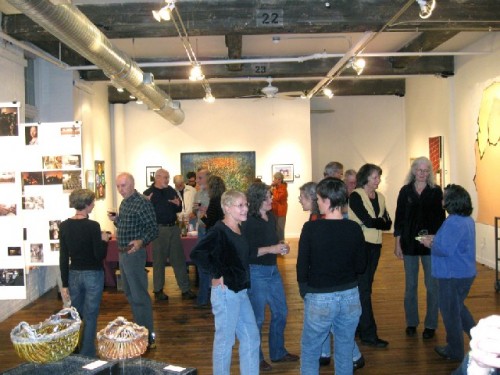 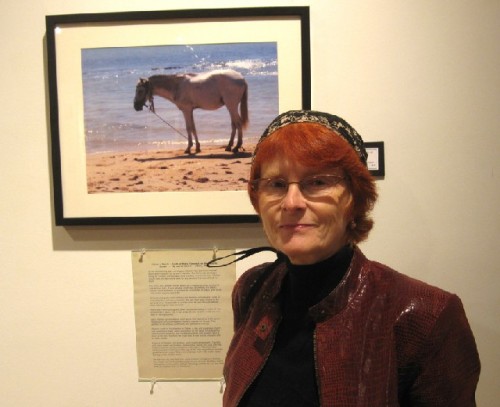 Astrid Hiemer with work she created in Senegal. 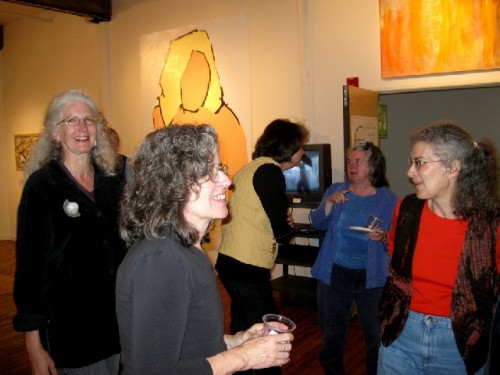 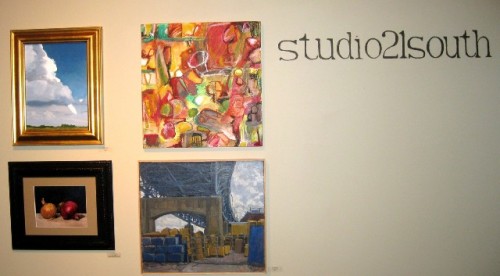 Studio 21 at the Beaver Mill. 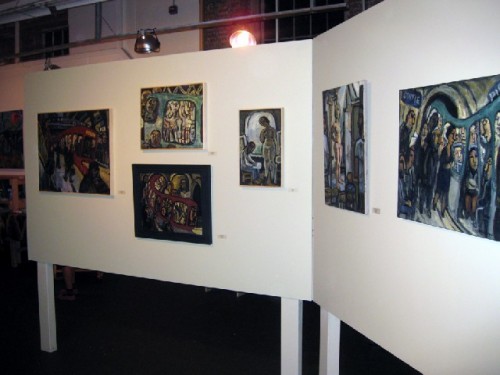 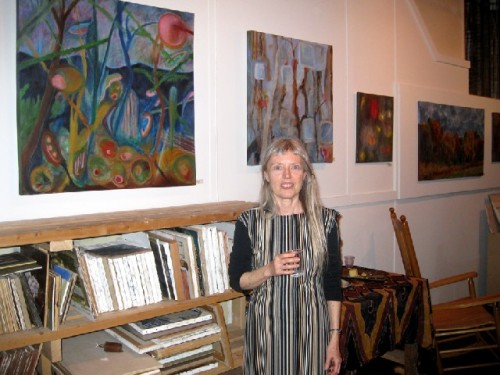 The fifth annual North Adams Open Studios will be launched with a reception for the artists, from 6 to 8 pm, at the Massachusetts Museum of Contemporary Art on Friday, October 16. The weekend of events, from October 17 through 18, will be introduced by this year's chair, Phil Sellers of River Hill Pottery, along with speeches by other arts and political leaders. Recently Open Studios was awarded a Gold Star in recognition by the Massachusetts Cultural Council (MCC).

Yesterday, shortly before the vernissage of the Eclipse Annual, we caught up with Sellers loading the kiln in the studio  of River Hill Pottery which he shares with his wife Gail. They were trying to keep up with production in anticipation of the sales when throngs descend next weekend. Months of work and planning have led up to this weekend. Individual artists pay a fee of $45 to show their work and have images and links posted to the official website. There is also a considerable effort for marketing and advertising.

Phil talked about the many who have volunteered in the year long effort. "Sharon Carson filled out our MCC grant application this week" he said. "It would have taken days to accomplish what she did over night. Brian Handspicker has done a terrific job with the marketing and PR. We have brought in money from artist's fees and we hope to build a fund that will carry over from year to year. It is also important to create ongoing continuity so you don't have a committee that burns out. Then the next group has to reinvent the wheel. We want to lure back some of those individuals to perform select and specific tasks."

Carson is a good example of this approach as she was a former chair. Currently she is the curator for the installations of work by local artists in the North Adams Hospital.

In addition to the Eclipse Mill, where the annual event originated, there is work shown in the downtown with many spaces coordinated as the Down Street program. This is a city wide project that was initiated last year by MCLA. There is also work on view in the North Adams Museum of Art in the Delftree mill that parallels the Eclipse on busy route 2. Artists also show their work at the nearby Windsor and Beaver mills.

In two events last night, at the Eclipse and Beaver Mills, we were able to get a lively sense of the mayhem that will prevail next weekend. Over the past few years the annual program has gained momentum which brings out local families and is also a seasonal event for those participating in the fall foliage extravaganza of the Berkshires. One traveler noted to me today that there is not a room to be had in the region. Motels, despite a bad economy, have raised the rates during a time of peak tourism. Open Studios provides additional activity beyond the seasonal pleasure of leaf peaking.

After the busy opening at the Eclipse Mill we stopped in at the Beaver Mill where four artists- Frank Curran, Jaye Fox, Karen Kane and Thor Wickstrom- had created a temporary gallery in Wickstrom's spacious studio. In addition to mounting work on the walls they constructed several free standing partitions.

There are some twenty plus owner/ resident participants in the Eclipse Annual. The show this year has been organized and superbly installed by the lighting designer and artist Julie Seilel. While confining participants to a single work that Seitel has  tretched that to include triptychs. She also encouraged large works which give the gallery a certain heft and critical mass. There is a balance between the somewhat gargantuan like an epic scaled, abstracted nude by Ed Carson, to an intimate work of jewelry by Michelle Silva. Diane Sullivan is represented by a small ceramic head. So this exhibition conveys the sense of the macro as well as the micro. Overall it works by creating a lively, diverse, and kinetic project that has viewers titubating through the space. Particularly, as there is a catchy sound track provided by the musician Carl Oman who has included his latest jazz CD.

Another ground rule is that Seitel requested new work. We asked the painter, Rick Harlow, when he had completed a large painting that is still untitled? "Yesterday" was his amusing response. He noted that it is the first new work he has shown since an exhibition I curated with him several years ago for Suffolk University. "It was started about a year ago" he commented. Like most of his work it was inspired by working with the indigenous people of Colombia and participating in their rituals. Harlow is represented by the artist run Clark Gallery in Lincoln, Mass.

When Harlow showed with me in Boston there was another display at the same time in our Project Space. It featured the series of portraits of soldiers with accompanying excerpts of interviews by Barry Goldstein. To create the images he had visited with the soldiers on their base and later traveled, twice, to work with them in Iraq. In the Annual he is displaying the proof pages to the Norton book "Gray Land: Soldiers on War" which will be released in an edition of some 6,000 in November. We congratulated him on completing the project. It was gratifying to see this work come to fruition.

One of the strengths of the Eclipse Mill Gallery is the opportunities it provides for artists to show their work. The season for the past two years has opened with the non juried Berkshire Salon. Anyone is welcome to participate and this season some 70 artists showed their work. For the Annual there is also an open selection process as resident artists may show whatever they care to within generic ground rules. This is challenging and has built in an element of risk taking. There is the pressure of peer review as the work must hold its own. But over several seasons it also tends to raise the bar. From year to year the growth and progress is abundantly evident.

We talked with Liz Cunningham about the series of monotypes she has been creating with the master printer Brandon Graving in the Beaver Mill. "I really feel like I have found my niche" she said. When she returns from travel, to see family in Seattle, Cunningham is anxious to tackle the Big Press which can print images that are up to six feet wide. Many artists have stayed in North Adams to work with the big press and to create large works for exhibitions. Cunningham, having now learned some of the basics of the medium, is ready and excited to take the plunge.

Similarly, it is only in the past year that illustrator and political cartoonist, Robert Rendo, whose work has appeared in major newspapers and magazine, has started to print and display his images. He is represented by one humorous illustration "Denial Is Just a Four Letter Word" in the current show. Rendo discussed plans for creating more large scale prints.

The painter Susan Graber divides time between family in Virginia and work retreats in her Eclipse studio. She creates both portraits and landscape paintings. In the current exhibition she is showing a large palm frond "Blue."

There is always humor in the work of Norm Thomas such as "Holy Moly" and "Joan's Portrait" by his companion Joan Kiley. Their work makes me smile.

Photographer and writer, Astrid Hiemer, is showing an image "Life on a Beach- South of Dakar/ Senegal"  which is a part of a series shot last January during a visit to West Africa. The image is accompanied by a poetic text that places the work in context.

It is always interesting to see what Jane Herman creates using the medium of felt. This time she displays "Frames" a geometric abstraction which conflates rich colors with warm and fuzz edges.

Let there be light is always a basic trope of the inventive works and cast shadows created by Brian Jewett. The piece on display has the puzzling title "p bag tutu."

The Eclipse opening was winding down when we moved on to the Beaver Mill and the "Studio 21 South" reception. They had a lively crowd and the exhibition is sure to be packed next weekend.

As always Jaye Fox was upbeat as she showed us her recent work. We were particularly intrigued by four small works she created when she and Thor were seated on the lawn during Tanglewood performances last summer. We often encountered them there. One of the paintings showed Michael Tilson Thomas performing while another was a view of the interior of the Shed.

In another series both Thor and Jaye have created views of a bridge in Brooklyn. They were similar as well as different. It made an interesting study in contrasts. Karen Kane was displaying a selection of recent abstract works as did Frank Curran.

Ralph Brill is planning his Hoosac River Lights project for Saturday, October 17. He sent along this update.

"An Amsterdam based Mermaid is due to make her appearance at our HOOSAC RIVER LIGHTS IIa Event which is scheduled for next Saturday 17 October from 8 to 10PM.  Light Artists Inhye Lee, Rikayo Horimizu and Ganesh Ramanathan have been following Mermaid Beatrice over the past few weeks.  It appears that Beatrice has followed a fleet of Dutch ships into New York Harbor and up the Hudson River to Albany.  They came as part of last week's massive celebration of the 400th Anniversary of Henry Hudson's voyage.  Apparently instead of following the ships back down river Beatrice has gone north a bit to the mouth of the Hoosick River (known as the Hoosic, Hoosac and Hoosuck up here) and is making her way to North Adams to see the Sol LeWitt Exhibition at MASS MoCA.  Inhye has reported spotting Beatrice at the Hoosick Falls in NY and she is expected to arrive in North Adams around 8PM on the 17th.  If the evening air is warm enough Beatrice will try to exit the Hoosac River at Holden Street around 8:30PM.  This is a big one for North Adams as no Mermaid has ever been spotted so far inland before. You don't want to miss this - something to tell your grandkids about so bring your cameras.  It is reported that VP Joe Biden might come to North Adams to greet Beatrice."

Overall the artists seem locked and loaded for the onslaught during Open Studios. Film at Eleven.