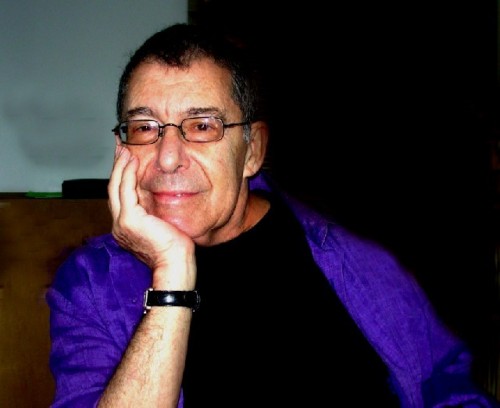 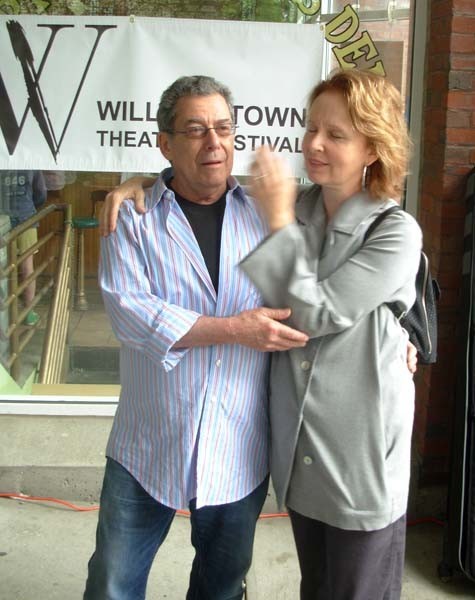 Martin during his first season with Kate Burton. 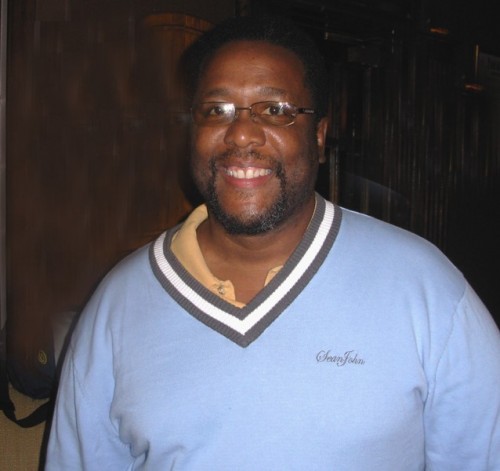 Wendell Pierce stars in the production of "Broke-Ology" which originated at WTF and is now playing in New York. 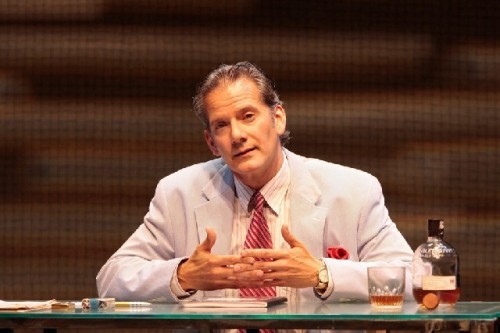 Campbell Scott in "The Atheist" also moved from WTF to a New York run. WTF photo. 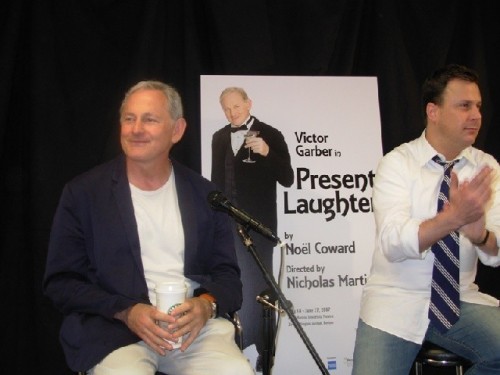 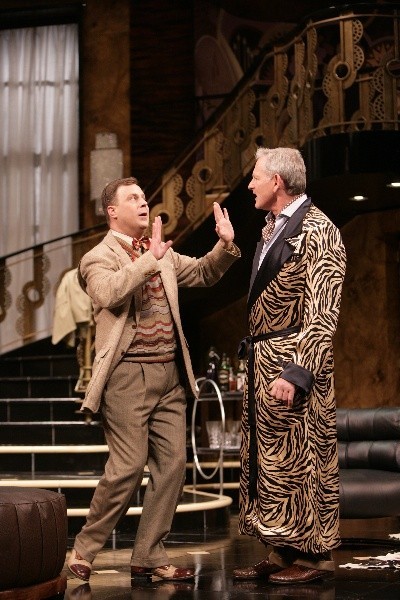 "Present Laughter" at the Huntington. 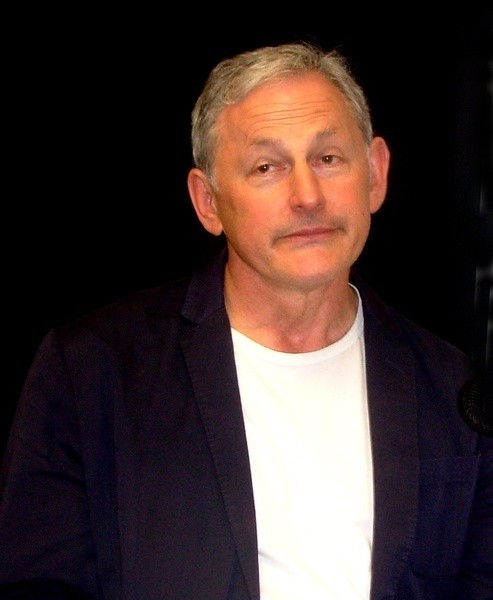 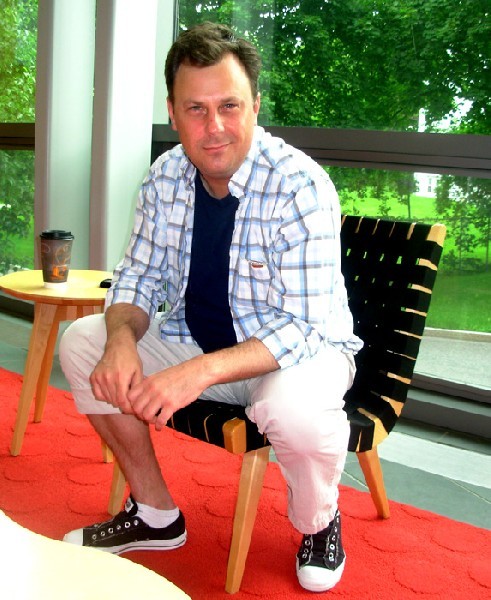 Last summer Brooks Ashmanskas spoke with us about working with Martin.

Last season was a challenge on many levels for second year artistic director, Nicholas Martin. In the fall of 2008 while working on directing a play in New York he suffered a stroke. After some months of recovery he opened the program at the prestigious Williamstown Theatre Festival.

During the pervasively difficult economy and hits on the WTF endowment the schedule was reduced with two less new productions for the smaller Nikos Stage. Also there was no musical with its additional costs. Compared to Martin's initial season when three plays "The Atheist" "The Understudy" and "Broke-Ology" went on to New York runs that has not been the case for the new plays in 2009 which opened to mixed reviews.

Given the condition of Martin's health and the mixed reviews and cutbacks for 2009 there has been some speculation on the status for the 2010 season. Part of that change if reflected in the WTF announcement which appears below.

In recent years WTF has struggled to get back on track and recover some of its tarnished prestige. It was widely viewed that the appointment of Martin brought stability to one of the nation's most renowned regional theatre programs. In the past it was known for the glittering array of stars who were cast with top directors. There had been a sharp decline during the troubled three year tenure of artistic director/ actor/ playwright Roger Rees. It is considered that the decline of WTF had preceded Rees.

Those who work with Martin are quick to comment that he is one of the most brilliant and widely respected presences in contemporary American Theatre. His run at the Huntington Theatre Company before arriving in Williamstown was just phenomenal. In January he is scheduled to revive one of those productions Noel Coward's "Present Laughter" starring Victor Garber on Broadway.

The coming season's programming is much anticipated. It remains to be seen whether Martin will be able to regroup and bring back that glitter and glamour to the illustrious WTF. Knowing Martin the odds are you bet.
Release from WTF below.

The Williamstown Theatre Festival (WTF) is pleased to announce the appointment of our new General Manager, Joe Finnegan. The appointment comes as part of an internal business strategy designed to align the management of the prestigious Tony Award-winning festival between our New York City office and the Festival's home in Williamstown.

The Festival's artistic team, led by Artistic Director Nicholas Martin, will continue to develop and plan the Festival programming from the New York City office, where WTF is uniquely positioned among regional arts organizations to access the best actors, directors, designers, and playwrights and bring them to the Berkshires.
Finnegan will act as a conduit for the Festival's artistic mission to the community and offer a stout strategy for WTF's business objectives.

Martin says: "For my first two years as Artistic Director, the Festival was blessed to have the dedicated support of outgoing General Manager Gilbert Medina.  I thank him wholeheartedly for his tireless work, professionalism, and sage guidance.  For Joe Finnegan to bring his history of success to the Williamstown Theatre Festival is a great benefit for the Festival and the community which it serves.  Joe is a man of many talents and vast enthusiasm, and we are all excited to have him as part of the team that brings world-class theatre to the Berkshires."

In addition to the practical and timely desire to apply forward-thinking business ideas to our non-profit structure, we're committed to strengthening our 55-year relationship with the Berkshire community by becoming more actively engaged in a year-round dialogue with our neighbors and supporters.

Matt Harris, President of WTF's Board of Trustees, notes:
"The new structure makes good business sense while also affirming the Festival's roots and its desire to serve this community. WTF needs pragmatic and sound fiscal guidance combined with a real understanding of operating something in this community.  Joe and the Williamstown team can deliver on that."

Finnegan and his family moved to Williamstown in 2005, after he had worked in a number of capacities on Wall Street. A frequent guest commentator for CNBC, he spent several years as a New York Stock Exchange floor official and as an active mentor for NYSE education programs. He was a partner at CMJ Partners, a specialist for Wagner Scott Mercator, and Managing Director and Head of Corporate Development for Bear Wagner.  Finnegan is currently the President of the Williamstown Film Festival and serves on the boards of Pine Cobble School, Images Cinema and the Williamstown Lacrosse

Association. He knows his background is not stereo-typical of a theatre manager and acknowledges: "WTF is replete with artistic talent and has an experienced staff of non-profit professionals. My goal is to bring my combined business and community-building experience to the table to create an efficient operational structure that yields greater results for WTF and Williamstown. The more people we attract to the Festival, the greater it is for the strength of the community."

We ask you to join us in welcoming Joe to the Williamstown Theatre Festival family.