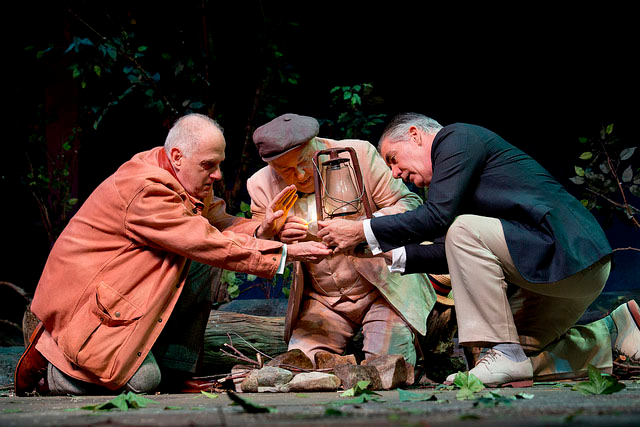 How many geniuses does it take to start a campfire? Photos by Scott Barrow. 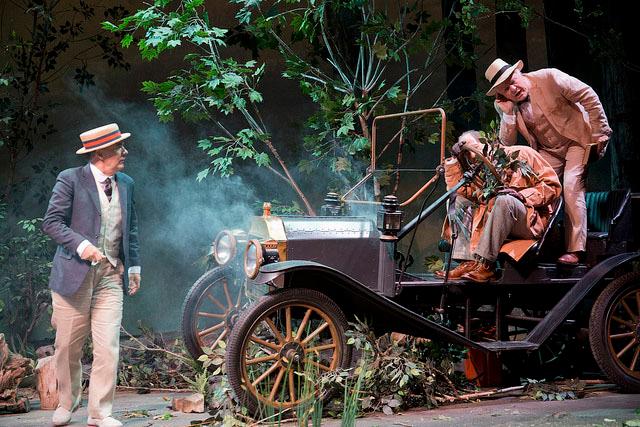 Lost in the woods. 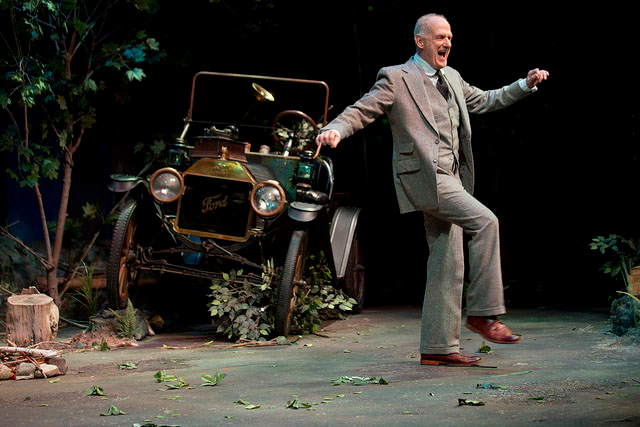 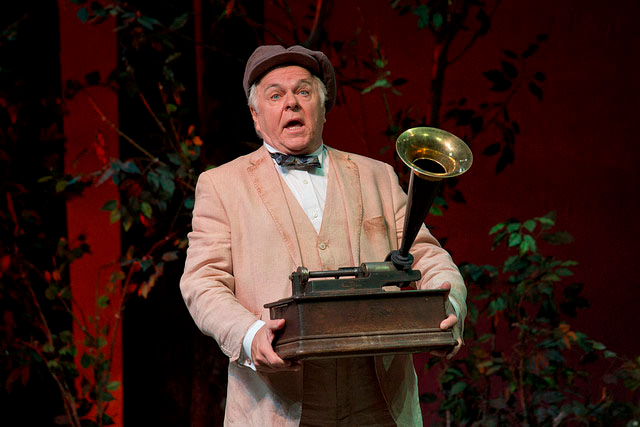 Edison and his talking machine.

Prior to last night’s debate between Donald Trump and Hillary Clinton, a mud-slinging brawl representing a new low for American politics, there was an uncanny table setter in a matinee of Mark St. Germain’s vintage but prescient, dark comedy Camping with Henry and Tom.

The 1993 play,  premiered and now revived by Barrington Stage Company, was inspired by the aspirations of then third party candidate and businessman, Ross Perot. Fast forward to the present and the audience was stunned by the degree to which the vile social and political views of businessman, Henry Ford, an anti-Semite and potential demagogue, channel the persona and views of billionaire developer, Donald Trump.

Yet again, as an enthralling performance revealed, truth is stranger than fiction. Sticking closely to meticulous research St. Germain precisely demonstrated that in the cycles of power and politics, particularly the abuses of one-percenters like Ford and Trump, plus ça change, plus c'est la même chose.

When the play was chosen for the anchor leg of the Barrington season nobody could predict that with a nip and tuck update it neatly elided from Perot to Trump. The hilarious but ominous play yet again proves that truth is stranger than fiction.

This ripped from the headlines play has enormous audience appeal. As with American Son, and its community programming, Barrington has invited local school groups. The students are in for an eye-opening lesson on theatre and current events.

Director Christopher Innvar has evoked a riveting Trumpian performance from Patrick Husted as the arrogant, self-absorbed, revolting, hate mongering plutocrat Henry Ford. In updating the play St. Germain states that only about five lines in the two-act play were reshaped.

Aspiring to be the 30th President, while cajoling Thomas Edison (PJ Benjamin), and blackmailing President Warren G. Harding (Kevin O’Rourke), he tweaks Ford by stating that he wants to make America “great.”

Although mounted on Barrington’s mainstage this is an austere production. The bucolic setting in the woods of Licking Creek, Maryland in 1921, designed by David M. Barber, and lit by Scott Pinkney, doesn’t provide much for the actors to work with.

The drama jokes about how many geniuses does it take to start a small campfire. Their car, a Ford of course, has crashed into trees. The vintage car is the most evocative prop on stage. An accident occurred when Ford, who was driving, hit and severely wounded a deer. This is an often visited plot point and metaphor. They strategize on how to put the animal (surrogate for a wounded electorate) out of its misery.

Passing the buck on who, how and why to euthanize the wounded animal signifies their inability to solve the greater issues of the nation.

Lost in the woods, literally, there is no where to run or hide from their raw and naked, at times pathetic and appalling, selves. With limited action this is a drama focused on word play. That is conveyed with limited staging. Improbably there is a bit of choreography (Ford square dancing) to music from an Edison talking machine.

Considering the status of the protagonists we marvel at the dramatic device of having them lost in the woods. They are up a  creek without a paddle so to speak.

The capitalists, Ford and Edison, enjoyed this annual bout of roughing it supported by a vast entourage. One assumes that when fishing there will be servants to bait the hooks.

In St. Germain’s trope Ford has taken off from base camp, including stealing the innards of the car of Harding’s Secret Service officer (Colonel Edmund Starling), to bully and threaten the President into resigning to avoid exposure of graft and sex scandals.

In these matters Ford is correct. Harding fathered an out of wedlock daughter while president and there were likely more dalliances. While not directly involved his administration was notorious for its corruption including the Teapot Dome scandal. An apathetic leader Harding surrounded himself with advisors and administrators who lined their pockets. Mid-term Harding, who appeared to be in good health, died suddenly. The remaining two years of his presidency were served by the tight-lipped Calvin Coolidge. It is alleged that Harding may have been poisoned by his vengeful wife. The play precedes the tragic end of his administration.

An affectingly modest man, well aware of his limitations, Harding was content to be a Senator and was pushed into accepting the nomination during a deadlocked convention.

Rather than fight Ford he suggests resigning from office and leaving an unhappy marriage.

With an uncanny resemblance to the financial concessions of Trump it seems that Ford wants Harding to privatize the Muscle Shoals power plant built by President Woodrow Wilson. Ford offers a payment of $5 million which is a fraction of what it cost. Prior to the sale Ford demands that the government invest another $50 million in repairs.

Doesn’t that sound like the 18-year deal that Trump admitted and even bragged about last night to avoid paying Federal taxes?

If Harding doesn’t knuckle under Ford plans to leak the dirt to the media. Harding, who is sick of the mess, couldn’t care less.

There is a neat reversal from Edison who, for most of the play, had been a disengaged and apathetic bystander to the power plays. Benjamin has offered the occasional droll observations (evoking most of the laughs in this dark comedy) while trying his best to get comfortable and stick his nose in a book.

Ford wants his inventor friend to be part of his campaign and an eventual cabinet minister. Edison isn't interested even at the offer to head the patent office.

In response to the entreaties by Ford he gets a laugh by stating that he is like Switzerland, cold and neutral.

Coming up off the mat Edison counter punches with threats to recall a hornet's nest of  details about Ford’s character and epic philandering.

For three men of genius, who changed and dominated their era, it appears that they weren’t all that smart. While money and power talk much of it is hollow hot air.

Spewing hate and bombast Ford and Trump are smart and tart but clueless about actually improving anything.

As Hillary commented, The Donald lives in his own reality, and is out of touch with the constitutional balance of power.

A businessman and CEO may dominate the board room while a president has to deal with Congress and the Supreme Court.

There is a familiar conceit that ruthless success in business qualifies them to run America on the model of mergers and acquisitions.  The Donald’s mantra of “you’re fired” accents the negative while offering nothing positive. The historical Ford in this play attempts to "fire" the president.

In a stunning screed Ford’s strategy for America will be to get rid of the Jews. That sounds much like Trump's Islamaphobia and war on Mexican "killers and rapists."

Ford was not unique among the capitalists and perceived heroes of his generation. The pro Nazi roll call of dishonor also included aviator, Charles Lindberg, and ambassador, Joseph Kennedy.

This cogent play by St. Germain proves to be a compelling drama that has crystal balls.