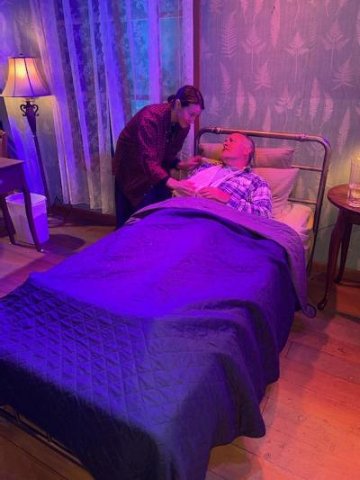 The riveting stage adaptation of Stephen King’s 1987 suspenseful novel, Misery, grabs you in a vice-like grip and never lets go. Undoubtedly, you could say the same for Empire Stage’s visceral and believable professional production.

Hurry, though. Tickets to this lean, mean, seemingly feverish dream of a play may disappear faster than a cheetah’s sprint.

This first-rate production is likely to elicit gasps and uncomfortable laughs before the roughly 90-minute, intermission-less show is over.

During the play, a newsperson remarks that fictional romance novelist Paul Sheldon’s ordeal seems stranger than his fiction. Indeed, that is part of Misery’s appeal. The plot, which deals with a fictional author’s real life, seems more bizarre than many make-believe tales.

For the uninitiated, Misery, set in the late 1980’s, centers on a New York-based romance novelist, Paul Sheldon. For years he has traveled to a lodge near a small Colorado town to finish one of his books and celebrate the accomplishment.  Before the play adaptation begins, he wrecks his car in a blizzard and becomes severely injured. Fortunately (and perhaps somewhat unfortunately) for him, Wilkes, a nurse, spotted him. She then pulled him out of his mangled vehicle, and rushed him to her home. As a nurse, she knew enough to revive and stabilize him.

Without anyone knowing where he is, or if he is even alive, Sheldon remains in Wilkes’ secluded home outside a remote, small Colorado town. And as Sheldon recuperates, he must deal with the eccentric Wilkes. More than once, she professes to be Sheldon’s “Number one fan.”

Wilkes seems cheery and charming. That is mainly because she is obsessed with Sheldon, his character of Misery, and the series of books he wrote about her. Still, if you cross Wilkes, she can become dangerously destructive. And it is safe to say that Sheldon got on his number one fan’s bad side after he killed Misery off in his latest book in the series. Soon after Wilkes learns of Misery’s death, she forces the author to reincarnate the young heroine in a new novel. “Write it, or die, and it better be great,” Wilkes essentially tells her patient.

In a society that worships celebrities, should Misery’s plot seem all that unusual? In fact,  psychologist Mark D. Griffiths defines “celebrity worship syndrome” as “an obsessive-addictive disorder where an individual becomes overly involved and interested (i.e., completely obsessed) with the details of the personal life of a celebrity.”

True, Annie Wilkes, Sheldon’s self-professed “Number one fan,” seems to know more about her idol than many casual fans do about public figures whom they admire. One of  the play’s strengths is that adapter William Goldman does not let us arrive at an easy conclusion. That is, he does not allow us to simply think that Wilkes is some deranged monster who belongs in an asylum in a straightjacket.

Sure, we may well conclude that Wilkes is more than a bit “off.” And her past actions are certainly evil. Even so, Goldman also suggests that Wilkes is vulnerable. For instance, she loves Misery Chastain, the heroine in Sheldon’s series of Misery novels, partly because “she makes me know I’m not alone in the world.”

How many of us can say that we turn to art to make us feel like we are not alone in our struggles? Chances are, more than a few of us see ourselves in a character on screen, on the page, or on stage. Further, has a fictional character ever seemed so real to you that you mourned his or her passing? Again, more people may fit into this category than you might think.

Thanks to film and stage adapter Goldman, Misery has made the leap from page to stage mostly unchanged. The basic plot and suspense remain. So do most of the characters. However, the play adaptation is leaner.  In particular, excess exposition from the wordy novel and the mostly-faithful 1990 film adaptation starring Kathy Bates and James Caan is gone. There is hardly a wasted moment in the play.

While Misery features suspense, there is also dark humor, the kind that makes us laugh uncomfortably.

For instance, Wilkes tells Sheldon that before she rescued him, “In a way I was following you.” Perhaps, some of us may squirm and laugh as we recall stalking incidents from the news or even our personal lives.

Speaking of personal lives, Misery can make us wonder how we would react if we were in Sheldon’s or Wilkes’ position. Or, after experiencing this story, we might look within ourselves to identify our own less-than-desirable traits. Quality theatrical pieces such as Misery can make us reflect in a variety of ways.

While the play features material not suitable for children, it is not nearly as graphic as the novel. Indeed, if you get queasy easily, you may not want to pick up the book. And if you are easily impatient, the source material may not be for you either. A chunk of it unnecessarily contains pages-long passages from at least one of Sheldon’s Misery novels.

One of the strengths of King’s book is that it allows us to enter Sheldon’s mind. Goldman, however, obviously realized he was writing for the stage. Therefore, he only included material best suited for live, in-person performance. Specifically, the play comprises pithy dialogue and plenty of action. On the other hand, you would have had to read the book or see the film to learn about Wilkes’ dark, deadly past. Oddly, the play does not mention it. Therefore, we are not as fearful for Sheldon’s safety as we might be had Goldman mentioned Wilkes’ past killings.

The lively dialogue is not the only thing that animates the play. In addition, it includes moments during which Sheldon physically struggles to maneuver. And, so, the challenge for an actor playing Sheldon is two-fold. He must not only effectively use his voice, but telling facial expressions to convince us of Sheldon’s physical and emotional pain.

Certainly, David R. Gordon excels verbally and physically as Sheldon. For instance, we clearly hear authentic-sounding desperation and suffering when Sheldon pleads with Wilkes to give him pain pills. In addition, a seemingly breathless and determined Gordon convincingly writhes, pants, slides, and wheels his way across the set of Wilkes’ home. And, along with his expressive eyebrows, Gordon contorts his seemingly bruised face into believable expressions of agony when he tries to make his way across the floor.

During Sheldon’s calmer moments, Gordon triumphs as well. Specifically, he lends his character believable polish and sincerity. Overall, Gordon makes the character his own without mimicking Caan’s equally-fine performance in the film.

As Wilkes, Elizabeth Price is not as dark and menacing as Bates was on screen. Actually, Price’s performance is more subtle and nuanced, although she thunderously shouts when it comes time to convey the character’s ugliness.

Price imbues her character with convincing girlish charm and sunny, dreamy enthusiasm whenever Wilkes praises her favorite author. She also playfully teases him.

To her credit, Price does not allow us to merely and easily brand Wilkes as a darkly deranged nut. In particular, we sense genuine concern and regret. This is true, for instance, when she returns home after Sheldon has been on the floor, suffering.

As Price portrays her, we sense that we are watching a complex, sensitive, and vulnerable individual. Price’s Wilkes might make a mental health professional think before diagnosing her.

As is true for Gordon, Price’s physical performance is as skilled as her vocal performance. For instance, she performs a happy dance atop her bed after Sheldon brings Misery back to life on the page. And in a scene that enhances Wilkes’ mystery, she dances grandly to Liberace’s music while brandishing a sledgehammer before breaking Sheldon’s ankles with the object. Certainly, it is darkly funny.

Goldman has included the late, great composer’s music, which we heard in the film, in his play adaptation. Its stateliness lends the proceedings a grandness as Sheldon types, suggesting a master at work.

Under David Hart’s quality sound design, the music is rich and clear. Meanwhile, Hart has implemented foreboding sound effects to enhance the production’s darkness. They include perfectly-timed thunder claps to accentuate the characters’ words or actions.

The cast, including Jim Gibbons as a folksy small-town sheriff, perform on Ardean Landhuis’s inviting and cozy, detailed set. Landhuis’s first-rate scenic design includes colors such as different shades of blue, light brown, and white. The light-blue wallpaper sports designs of feathers and trees while the white, patterned curtain allows us to see the greenery outside. All that is missing is the sight of a blizzard dumping snow. It might reinforce Sheldon’s sense of entrapment, and further lend the production a foreboding quality.

On a more positive note, books are clearly visible, as are two crosses, reinforcing Wilkes’ strong spiritual beliefs. There’s even a piggy bank, perhaps a nod to Wilkes’ pet pig, whom she named Misery.

Meanwhile, Briana Earhart’s costumes define character. However, curiously, Price wears only two costumes during the play, which spans weeks. You would think that Wilkes would change clothes more frequently.

As is true for Price’s Wilkes, Gordon’s Sheldon wears the same outfit throughout the show. And he wears leg braces to suggest broken limbs.

While Misery may seem to offer purely escapist entertainment, it also leaves us with fodder to think about. Our celebrity-obsessed culture, mental illness, and why we value art are just some of the topics to consider.

“There’s a shortage of pleasure on this planet these days, in case you hadn’t noticed,” Wilkes says at one point to the sheriff.

She may repulse you, but you have to agree that the aforementioned statement rings true today, decades after the story’s setting.

Empire Stage’s production of Misery continues through Oct. 30. Tickets are $30 each. Showtimes are at 8 p.m. Fridays and Saturdays, as well as 5 p.m. Sundays. For tickets, go to https://www.eventbrite.com/e/misery-the-play-tickets-377478858427. And for more information about Empire Stage, go to www.empirestage.com.