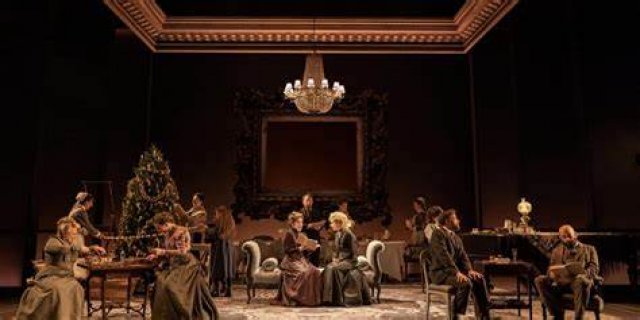 The playwright Tom Stoppdard’s mother, his only connection to his earliest life, born in Czechoslovakia and traveled to Singapore and then to England. She did not discuss her Jewish origins. Growing up in Britain, Stoppard asked her to write the family story. He gave her a beautiful notebook, which she returned. She would scribble the bare outlines in a small cheap exercise book.

The move to England, she wrote, had been so sudden, unplanned and drastic that I – perhaps subconsciously – decided the only thing to make it possible to live and truly settle down (I mean the three of us) was to draw a blind over my past life and start, so to speak, from scratch. Whether this was realistic or possible, I don’t know. I mean whether it was the right thing to do.

Stoppard’s most recent play, Leopoldstadt, fills in the history. The family lived in Vienna. Leopoldstadt is the Jewish ghetto in that city.

The drama opens with a Christmas celebration. By 1899, some members of the family had converted to Christianity, a defensive ploy for many European Jews.

Those familiar with the biography of composer Felix Mendelssohn’s conversion to Christianity will recognize the dilemma of 19th century European Jews, a dilemma that would expand in geometric leaps (the mathematician Stoppard is so fond of) in the 20th century.

The Mendelssohns lived in a very difficult time for Jews. Felix's father Abraham made the same “compromise” many Jewish families did: to convert to Christianity to gain citizenship and public acceptance. The great poet, Heinrich Heine, also a Jewish convert, characterized baptism as the “ticket of admission” into European culture.

Jews cannot escape their Jewishness and baptism does not remove the “taint” of Judaism as the Nazis illustrated for all time. A Jew remains a Jew in the eyes of anti-Semites. Stoppard has written often about people who erect defense mechanisms against the world. Jews had to do this to survive.

Stoppard discovered that he was Jewish after he had grown up. In some ways, his mother's secret protected from anti-Semitism.She had moved to Great Britain before Stoppard was four.

He brings to this new work many of the dialogue techniques with which we have become familiar. It may be difficult on the face of it to find humor in the family’s story, but Stoppard succeeds. A delicious incident confuses a business lawyer with the mohel come to perform a bris. Stoppard shows that heavyweight subjects can be approached with a gaiety of spirit. There is a sweetness in the cuckolding of the family patriarch, Metz. The prospect of a duel is funny.

The emotional power of the work comes more from our intellectual understanding of its arc than from our commitment to individual characters.

We do not feel that Stoppard is making the case for conversion, or for denial of one’s heritage. In fact, the character in the play who may represent him is caught up in meeting his father in the tiniest detail: some stitches made in the hand of a family member who had been cut by glass.  Kristallnacht is the night of broken glass in which Jews were forcibly removed from their homes. For Stoppard, the stitches are a consolation, for he can see the work of the biological father who exists outside his memory.Yet he has always felt more like W.H. Auden who remarked that none of his poems had saved anyone from the gas chamber.

This is not, however, a play like The Importance of Being Earnest, which Stoppard claims is great because it says nothing about nothing

Stoppard writes about serious issues as a witty, complex dramatist. One relative is trying to accomplish the Sisyphisian task of solving Reimann’s hypothesis. We have had Stoppard’s Arcadia, all about math, which appears to be a genetic transmission in this group.  Cat’s Cradle is played for the intersection of points which define a seemingly endless progression of forms which lead–nowhere.

Are the heart and the head operating in harmony? The course of the drama is this arc. We watch human beings reduced to a state of plausible, unstoppable desperation. The stage is crowded with wonderful characters, forming a pod. A Charleston dance, juicy sex, flirtations and betrayals, all play before us, in a rich tapestry which will be torn down by the Nazi occupation of Austria in 1938.

Theodor Herzl who lived in Vienna during the timespan of the play, is not a character, but his presence is felt. He made a splash when he suggested a homeless people needed to find an unoccupied land. News of his campaign plays against the family’s wish to remain in their home. Over time, the dangers of remaining become clear.  Baptism is not going to save people. Only an exodus will.  Stoppard’s mother and father leave after the Nazi occupation in 1938.

Mendelssohn had concluded that Jews were better off in England.  Stoppard may have come to the same conclusion. His stand in the play is ineffably moving as he meets the few family survivors. You can meet them too is in this terrific theater production at the Longacre in New York through March 12, 2023. Anyone who likes to tussle with ideas will love this Stoppard playfield.