The Porch at Windy Hill 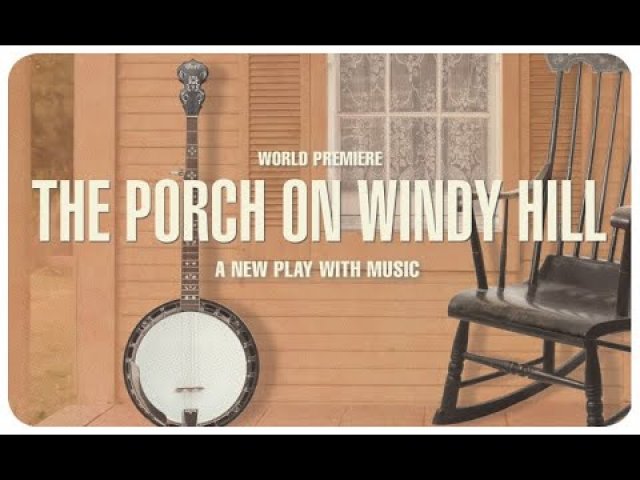 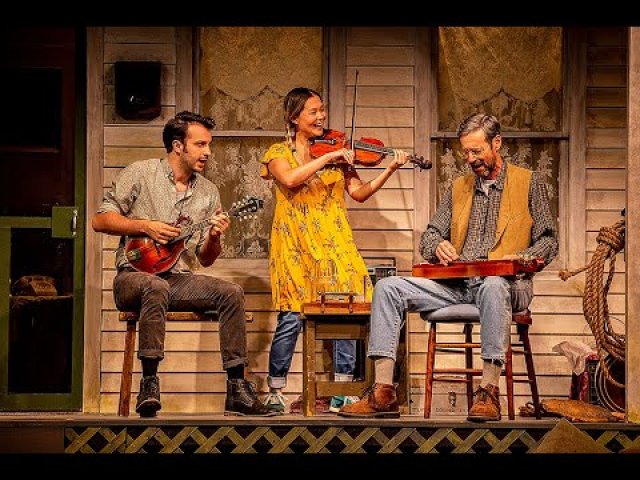 Blue grass and Appalachian music usually isn’t my thing, but my toes were tapping while enjoying the play-with- music, The Porch at Windy Hill now at Ivoryton Playhouse through Sunday, Oct. 17.

It’s a world premiere that uses the pandemic as the rationale for a young couple, Mira and Beckett to take an extended road trip; their small Brooklyn apartment is driving them crazy. Both are musicians: Mira a classically trained violinist and Beckett a musical ethnologist who is writing his dissertation on whether American folk music is still adapting and changing as the population changes.

They’ve hit the road and end up in a small North Carolina town. Beckett is searching out music and performances – he calls then hootenannies though they go by many regional names. But he is surprised when the performer they see is Mira’s grandfather, Edgar. She had never mentioned much about her grandparents or where she grew up.

The story is a story of reconciliation and growing understanding. Her mother, Edgar’s daughter, had married a Korean-American she met at a nearby university. They lived in the small town until Mia was 8 when they moved to Westchester County. Edgar and others in the town never accepted Mira’s father and the sting of small slights and insults became too much when a cousin called Mira a “gook.” Neither her mother not she has had any contact with Edgar since then. They resent that he didn’t speak up.

Is there a little too much coincidence in the story? Yes, but it doesn’t mar the impact of Mira and Edgar finally talking honestly with each other, and Mira rediscovering her positive memories as well as her love for the music her grandfather taught her.

The show is chocked full of the music of the area and the talented cast members show off their musical skills on multiple instruments. They play the violin, guitar, banjo, mandolin as well as dulcimer and even a Japanese instrument. I may have forgotten one or two others.

The songs are not listed in the program, and it was hard to always know what the titles of the songs were. I recognized “Down in the Valley,” “Blackberry Blossom” and “Little Log Cabin in the Lane.” Yet I can assure you no matter what their names, they were enjoyable to hear. It’s clear that one of the final songs “Over the Waterfall” relates to Edgar’s comments that he had, in his actions and attitudes, “lost his way.”

The show was put together by the cast and the director, Sherry Lutken. Edgar is played by David  M. Lutken who audiences in Connecticut are very familiar with. He created the show Woody Sez about Woody Guthrie that has played several theaters in the state as well as across the world. He also starred in The Will Rogers Follies at Goodspeed, among other performances. He captures Edgar’s reserve, dignity and pain perfectly while displaying his musicianship on multiple instruments.

Morgan Morse, who comes from Ansonia, plays Beckett. His character provides the motivation for the trip and the music as he and Edgar recall performers, performances and songs. He imbues Beckett with academic certainty that can seem pompous but also tenderness to Mira.

Lisa Helmi Johanson is an accomplished actress and musical theater performer who also plays a mean violin. She truly brings out Mira’s reluctance to recall the hurts and her fear of being hurt again. When she confronts Edgar about what had happened and how her feelings about him changed, you have hope for their future relationship.

Scenic designer Martin Scott Marchitto has struck just right the tone with the set: it looks like a farmhouse porch – a little run down and definitely old – sitting on a hill. Almost all the action takes place on or around the porch.

The sound by Tate R. Burmeister and the lighting by Alan Piotrowica help set the mood.

You should make sure you see this show, no matter what your musical tastes. Tickets are available at IvorytonPlayhouse.org