Place Premieres at the Harvey Theater 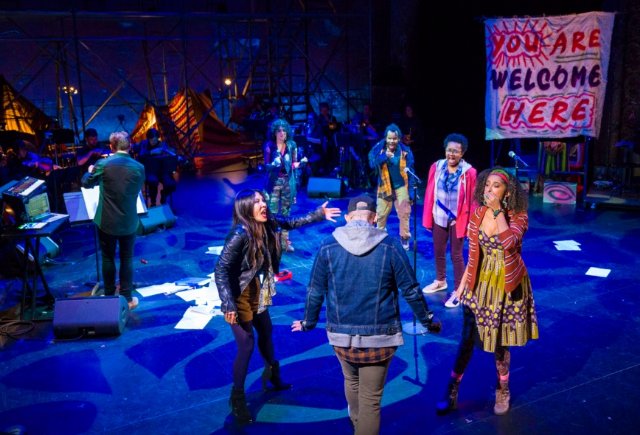 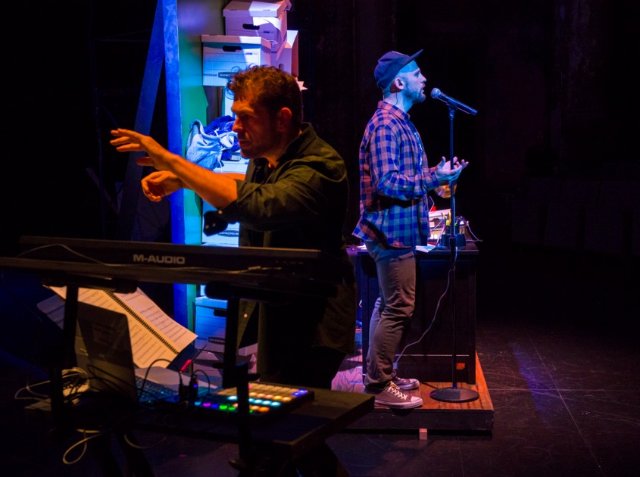 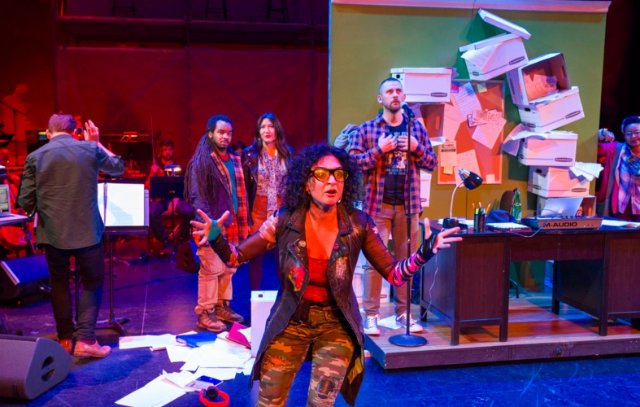 The wild and wooly Sol Ruiz enchanting and raging. 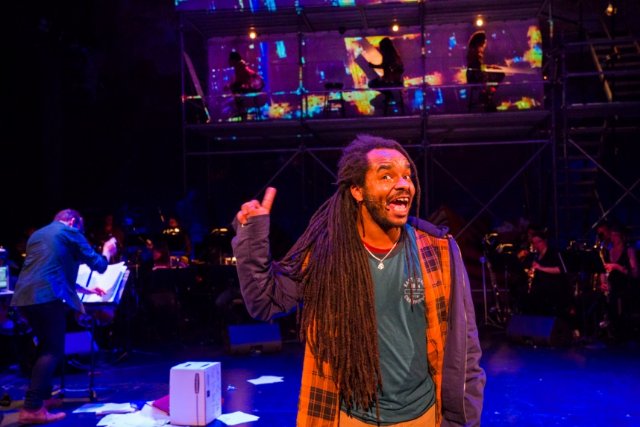 Place by Ted Hearne had its world premier as part of BAM’s New Wave Festival. Like Giuseppe Verdi whose music became the anthem of Italian unification, Hearne is a voice for the big issues before our country. His new oratorio addresses ‘gentrification.’ It is deeply personal and deeply moving.

The Harvey Theater venue is a perfect choice for Place. Erected in the early twentieth century, the building was a glamorous theater for plays and then for movies. The head of BAM climbed in by ladder through a second story window when a decision was made to renovate the theater as part of the ‘gentrification’ of downtown Brooklyn. A distressed look was consciously maintained, reminding us that this place existed before we did. So we have a modernized theater full of references to its past, but also always asking the question, What next? Place does this too.

The set makes full use of the Harvey. The ground level of the scaffolding has an unfolding drama of American history which includes the Indian Wars. An 18 member ensemble is conducted by Hearne on stage. A small scaffolding holds an outlier (Sol Ruiz) who is feral in a robe that looks like bear skin. She will step out to join the action as Place progresses.

Four powerful singers, Sophia Byrd, Josephine Lee, Isaiah Robinson and Ayanna Woods are perched in darkness of the second level of the large scaffolding. Steven Bradshaw playing Hearne will pass through the third level and every other portion of the stage and audience through the evening. He starts in an office at center stage, ground level.

Hearne opens explaining his place in the gentrified world, a young white man of privilege, who wants his five-year-old son, whose birthday balloons are signed in the upper part of back stage, to succeed. There is no separation between father and son. He can hear his son comforting himself in the darkness with song. Speaking and sometimes stammering the non-character Hearne (Bradshaw) describes his place in his son’s life and hopes for him. Hearne struggles with lovely lines and broken stammers and stutters.

The music is a mix of genres, which change with the subject matter. The accessibility of popular music delights us early on. The violin is pleasantly absent. Cutting its often abrasive sound makes music more inviting. A texture of liturgy emerges from three cellos.

Yet the composer distances deliberately. He can slide on and off a note, and press a note from another key up against expected harmonic arrangements. As the evening progresses, we hear snatches of gospel, jazz and hip hop. Music is a ‘genre stylistic signifier.' Amidst beauty and complexity, Hearne creates diversity in his tones. Long echoing vowels are held for emphasis.

As the first part progresses, Hearne appropriates the language of a James Baldwin and a Judith Butler lecture. An interview by the inventive director Patricia McGregor is also woven in. With these ideas, the work begins to open to others in the world about Hearne.

This world crashes in as Saul Williams takes over in Part 2, in response to the first part. “Is it okay to say white supremacy in white spaces?” Repetition throughout emphasizes political points and feelings. “Amiokamiokamiok” is unavoidable as it is jammed. “Is it okay if I let some anger show? Even if it has no place?”

The four singers have moved into the light at stage floor level. Isaiah Robinson has a thrilling falsetto which can be soothing at times and scream at others.

White flight from neighborhoods is questioned. Now whites are returning. Why did they leave in the first place? Brooklyn’s Spike Lee may have provoked this question in Do the Right Thing. We get no answers in Place. Only questions. Urgent questions.

How do we honor the truths of Ted, a white man, walking down the street and Saul, a black man, walking down the same street? How do we deal with different colors? These questions haunt Place and haunt us. Yet the comforting democracy of the creation of Place spins out to the audience. Intimacy feels more comfortable for everyone at the end.