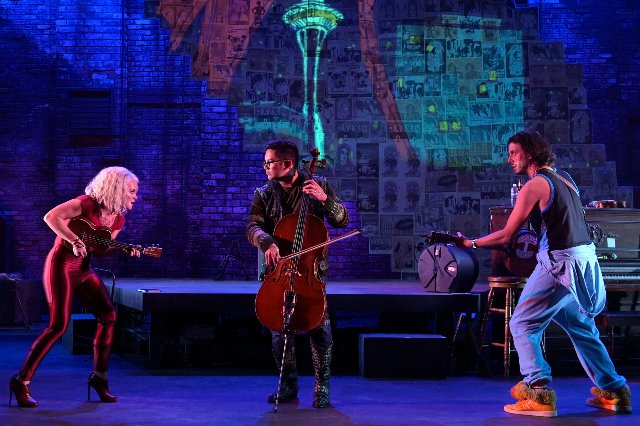 Origin stories are as old as, well, human origins.  Societies, governments, clubs, and all manner of organizations craft stories to honor their legitimacy.  These myths tend to be self-serving glorifications that often stretch the truth and sometimes create legends out of whole cloth.  The brilliant and imaginative “Lizard Boy” origin builds on the slaying of the dragon responsible for the 1980 Mount St. Helen's volcano eruption.

Rarely has this reviewer attended a play with less enthusiasm.  Traveling, I hadn’t slept in my own bed in a week; drove hundreds of arduous miles that day; rushed from an afternoon party in Big Sur; and would have to unload the car after driving another hour when the play and reception were over. What’s more, expectations were not favorable as the play’s profile falls outside of the wheelhouse of a traditional theatergoer on a number of criteria – a seeming appeasement to youth culture targeted at attracting a younger audience; comic superhero fantasy motif; a small cast (three hander); a contemporary “new musical;” online-arranged gay dating encounter.

Suffice it to say, my predictions were wrong on all counts.  With “Lizard Boy,” youth is served and age is respected.  This is a big tent musical that will please anyone with an open mind and a caring heart.  The auteur, Justin Huertas who wrote the book, music, and lyrics, and who plays the lead role, has fashioned an absolutely riveting theater piece that pulsates with emotion and extracts enormous empathy.

In many ways, the play unfolds like “A Day in the Life,” as the action compresses into less than 24 hours.  Huertas plays Trevor, who has escaped his past into the anonymity of the big city – Seattle.  His loneliness prompts Trevor to seek connection through the gay social networking site, Grindr.  Linking up with the heavily hormonal yet sensitive Cary, played in a dorky and lascivious manner by William A. Williams, their clumsy relationship sets off in fits and starts.

It is the time of the annual Monster Fest, and when Cary asks Trevor to take his makeup off, Trevor’s reality is revealed.  He wears none.  He developed lizard scales from being splattered by the blood of the Mount St. Helens dragon that he slayed as a five-year old.  So the subtext reveals the suffering of those who look or act differently, including those of minority ethnicity and those in any way disabled or disadvantaged.  Both young men feel dispossessed and seek acceptance and simple human compassion.

The third character is the super-antihero antagonist, with cover as a singer named Siren.  Portrayed with sexual allure and provocative maleficence by Kirsten “Kiki” deLohr Helland, she stomps and slithers in a skin tight red costume.  But because of their shared past at Mount St. Helens and her designs, Siren represents a threat to Trevor’s future.

The play works for a number of reasons.   First, it is hard not to care for the characters, particularly Trevor, who is trapped in a desultory existence through no fault of his own.  His pain and earnestness are palpable throughout, especially as he sings “Nobody Wants You.”  The dilemmas that the characters face are convincing and expressed eloquently, in large part through the music.  Not only do the charming and thoughtful songs propel the narrative, but the segues from dialogue to song and from one voice to another are uncommonly organic.  Along with the humor, the hand offs are exquisitely timed by all of the performers.

The music itself falls in the folk-pop-rock genre and is melodic and oh so listenable.  It is totally acoustic, with the dominant instruments being - get this - cello, ukulele, and guitar.  (Sidebar – when Seattle Rep commissioned Huertas to write a musical, which he had never done before, the single condition was that he play the cello in it!).  Collectively, the instruments act as another character, and in a fight sequence, they are simultaneously played and used as weapons.  The composer finds incredible two-and-three-part harmonies in ensembles as well as soaring solos to display Helland’s powerful pipes.

For those who expect visually descriptive sets to fit the plotline, looking at a stage more suited for a rock concert might seem a little disconcerting at first.  And some of the songs are even done in a “stand and deliver” storytelling style.  But what can I say?  It all works.  We have the imagination to fill in the blanks where necessary.

The structure of the play is playful.  It seamlessly flashes back and forth in time, and some contemporaneous sequences flash between Trevor with Siren and Trevor with Cary.  The one thing that could stand improvement is that the conclusion becomes a little extended and confusing.  The minor flaw in no way undermines this powerful entertainment.

“Lizard Boy,” with book, music, and lyrics by Justin Huertas, is produced by TheatreWorks Silicon Valley and plays at Mountain View Center for the Performing Arts, 500 Castro Street, Mountain View, CA through October 31, 2021.