Schjeldahl in the New Yorker and The Globe’s Smee 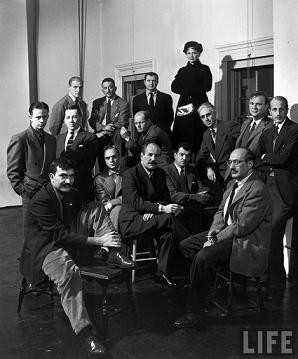 A trope for the study of art history is the compare and contrast portion of an exam. Two images are projected and students are challenged to develop an essay exploring similarities and differences. There is an implied critical evaluation that one work is better than the other and why.

Particularly difficult examples of this entailed projecting similar paintings from the Analytical Cubist period of Pablo Picasso and Georges Braque. Or, as was the case when I was a graduate student, the naves of two cathedrals. We came to know the specific slides from class or the minute details.

The purpose of this was to develop a keen eye and the skills of critical analysis. For those of us who aspired to enter the profession this was tough love. It prepared us for the contact sport of survival in the art world.

At this point in my life, I suffer combat fatigue and an aesthetic version of post traumatic stress syndrome.

It is not with surprise, but a certain ennui, that I respond to the combative rhetoric of writers for such influential publications as The New Yorker’s Peter Schjeldahl, and Sebastian Smee, for the Boston Globe.

Actually, it is refreshing that they express critical opinions. In general, one finds none of that in the major art magazines. A feature in Art in America, for example, may inform us of the work but fails to provide an evaluation of its strength and weakness, or to place it into a larger historical, and  critical context. One senses that, if the author expresses an opinion about the work, it is eliminated through the process of editing. The art magazines strive to inform but not offend. Particularly, not the galleries that support articles with expensive, full page ads.

Significantly, there is no gallery advertising in The New Yorker or The Globe. So their writers are able to express harsh opinions with impunity. Isn’t that what critics are supposed to do?

With interest in the subject I read Sebastian Smee’s review of a traveling exhibition of work, by Linda Benglis, at the Museum of the Rhode Island School of Design. It will move from there to the New Museum. While I have long followed the work of Benglis, I was surprised and annoyed by the quote that follows.

By this I presume that Smee regards her work as “great” “powerful” and “fabulous.” Frankly, I don’t recall any of those words in the lexicon of art history. Would one apply them, for example, to an essay on the sculpture of Michelangelo Buonarotti or  Gianlorenzo Bernini? But further scrutiny of his statement on Benglis reveals that her work is “greater” “more powerful” and “more fabulous” than that of Serra, Morris, and Hesse. Names so familiar to the Globe’s readers that, on first mention, the norm of journalism, we do not need to know that they are Richard, Robert, and Eva.

Reading on we learn that the works by Benglis are “more audacious” than that of Matthew Barney, Anish Kapoor, of Takashi Murakami. Barney’s work receives no modifier, it just is, compared to Kapoor’s which is “prim” or Murakami’s which is “explicitly saucy.”

Reading the Globe’s Smee I have now learned that art can be “great” “powerful” “fabulous” “audacious” or “prim.” Those are the kind of insights and modifiers I expect from a report on the spring fashion collections in Milan. These buzz words, without a shred of critical analysis or evidence, are intended to convey the hip, savoir faire of the well connected, ersatz brilliance of the writer. By implied contrast, the apparent lack thereof, in the opinion of the reader.

Since this is art criticism, and not a court of law, the artists in question are presumed  guilty until proven innocent. There is no need for fact or evidence to support the accusations. How audacious, or is it prim? Saucy perhaps.

Oh well. That’s just the Globe and not Roberta Smith, in the New York Times, or her partner, Jerry Saltz, in New York Magazine. They certainly have opinions.

As a subscriber to The New Yorker I regularly read but seldom agree with Peter Schjeldahl. The essays often annoy me but generally I let them slide. There are other things to do during the day. But not this time.

For those of my generation Abstract Expressionism was as warm and familiar as mother’s milk. We were nursed on it. When I was a student, during one of Sam Hunter’s gala openings at the high profile Rose Art Museum, my sculpture professor, Peter Grippe, introduced me to Hans Hofmann. He asked me if I was a painter or a sculptor. Hunter also brought Robert Motherwell to campus. I was one of the few students who attended the slide lecture. Later I got to talk with him during openings of the Long Point Gallery in Provincetown. In June, when the dorms of Brandeis were vacated, Hunter filled them with the New York School for a Poses Symposium. Again, I was one of the only students to attend that incredible event. In the school paper, The Justice, I attacked Hunter for staging such a lavish and expensive event when school was not in session.

It is always different when you read an article about a familiar subject. You are not dependent on the author to form an opinion of the work. It is more a matter of “compare and contrast” between your own information and that of the critic. If the writing is well constructed and insightful there is always something to learn.

Since the essay “Big Bang: Abstract Expressionism on full show at MOMA,” in the October 18 issue of The New Yorker, is based on works in the permanent collection, I am familiar with the images discussed. No, I have not yet seen the exhibition.

Wading through Schejdahl’s interminable paragraphs I slogged on with diffidence rehashing familiar information. Out of curiosity, I measured his lead paragraph. It clocked in at 7” with the next just shortened to 5.” In all, there were just seven paragraphs in a page and two thirds of text, broken up by a single 3” high, horizontal image spanning three columns. In the Germanic tradition, this signifies that the writing is “scholarly.” It implies that the typical New Yorker reader is patient and committed. Like the Sunday Times, nobody actually ever reads through an entire issue of The New Yorker. Most of us look at every cartoon.

I jogged along on cruise control until about half way through the second to last paragraph. There I ground to a halt, and reread several times, what devolved into an annotated list of artists of the era.

To quote “…There are a few too many by what might be termed major secondary figures- Franz Kline, Hans Hofmann, and Ad Reinhardt- and a lot too many by the long overrated Robert Motherwell and Adolph Gottlieb, both of whose early originalities succumbed to timid formulas.”

Hey, wait a minute. That’s a lot of opinion with little or no evidence. Consider, five major artists get bumped out of the canon in a single sentence. It seems more like a class action suit than critical evaluation. The one artist, in this lumping together, who is clearly not “secondary” would be Reinhardt. That notion is best applied to Gottlieb. The jury, in my opinion, is still out on Kline, Hofmann and Motherwell. Schjeldahl needs a lot more critical analysis before a perceptive reader would just swallow his conclusion.

My own misgivings about Kline and Motherwell began when I learned that their slashes and drips, unlike those of the masters Jackson Pollock and Willem de Kooning, were planned and premeditated. Kline enlarged his compositions from sketches.  In a video of Motherwell painting, I was shocked to see him drawing a “drip” or jagged edge onto the canvas and then filling it in. That completely dismantled the mantra of the spontaneity of what Harold Rosenberg called Action Painting. And yes, Peter, Gottlieb was indeed formulaic.

Having toppled these five iconic artists, Schjeldahl then morphs into a defender of women, widows, and children. In the next sentence (within an endless paragraph) he exalts the humbled.

“Pleasant surprises abound in seldom seen works by Richard Pousette-Dart, William Baziotes, Theodore Stamos, Sam Francis, Grace Hartigan, Norman Lewis, and some others, including Rivers at his insouciant peak: ‘Washington Crossing the Deleware’ (1953), the General upright in his boat amid showoffy scraps of line And washes of color…”

By careful reading and calculation I observe that the critic has trashed five artists as “major secondary” with one sentence. Then, in the next sentence, elevated seven artists as “pleasant surprises” based entirely on how “seldom” MoMA exhibits their work. This starts to read like ad copy for a Bud Light commercial. We are presented with the equivalence of “tastes great” or “less filling.” Is evaluating art any different from selling beer? This is the entropy of the trend of branding movements and artists.

There is the inevitable short hand critique of the influence of Clement Greenberg. He was the Oedipal father figure that those of my generation earned their bones by slaying. May Clem rest in peace.

The essay winds down with “…Both tales run aground in the sixties, when the New York School’s big painting became the chassis for Warhol’s Marilyns and Elvises, and the taciturn object-making of minimalism. Then those movements, too, disintegrated, and it’s been pretty much one damn thing after another ever since.” Oh boy.

On the way out of this “essay” he slams the barn door and trips over Mrs. Murphy’s lantern. In so doing burning down Pop Art, Minimalism, and “one damn thing after another ever since.” Is there no limit to the hubris?

Reading, thinking and writing about all this is exhausting. Long ago, I earned a Purple Heart in the art wars. Since then, art has become for me ever more serene and sublime.

To sleep, perchance to dream.