The Lily's Revenge Flowers At A.R.T

Pushing the Boundaries of Theatrical Experience 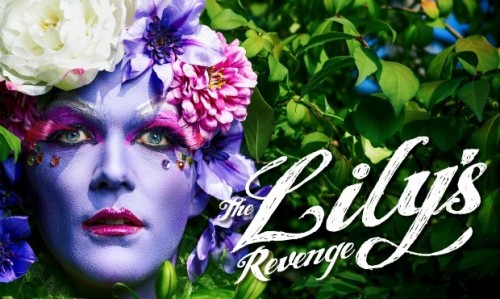 Poster from the American Repertory Theatre

Taylor Mac as The Lily

Remo Airaldi Plays The Sunflower Master in The Lily’s Revenge

Presented by The American Repertory Theatre

Epic in length and campy, surrealistic, surprisingly clever and entertaining in content may be one way to describe Taylor Mac’s The Lily’s Revenge at the American Repertory Theatre’s Oberon Theatre.

Another way would be to describe it as an Opus Magnus bouillabaisse of witty vaudeville schtick, English Music Hall audience participation and Weimar decadence literally flowered with bigger than life drag queens, preposterous flower girls, vignettes and dance numbers and sprinkled heavily with poetry, philosophy, brides and grooms, dieties, musical flowers and other seemingly real but fantasy stock figures. There is even a murderous Pope.

The show actually begins with The Lily in the audience wanting to become the center of attention and wanting to go from being an organic potted houseplant to a groom for the bride. Early on in the story, the phrase institutional narrative is bandied about. Better terms may be traditional narrative or traditional institutions. But the audience gets it. The institution of marriage is being questioned and eventually is being stood on its head as is gender, sexuality and new forms of relationships both human and vegetative.

A major player is Time (played often officiously by Samantha Eggers) who was initially clad in a see-through netting with sexy black underware. Though initially designated as the Mother figure to the characters Great Longing (The Curtain) and Dirt (who lives in Ecuador) in the beginning, she appears to be a diety. And her sexuality becomes more gender neutral as the show progresses. At the end of the show, she is referred to as the Parent.

The production is imbued with a living Stage Curtain, representing Great Longing and a god of nostalgia, that is a somewhat evil, manipulating (and later stripping, bumping and grinding) Wizard of Oz-like aspect. Thomas Derrah played the Curtain shamelessly from large to larger than life. A bitchy Master (or Mistress--hard to tell) Sunflower was played bitingly as well as poetically by Remo Airaldi wearing an evening gown.

It is also about same-sex marriage, factory-grown organic plants, not-so mirror images, dreams and desires, flowers with poetic personalities and finding one’s self in society while dressed in over the top outfits and makeup that often look like castoffs and overstocks from clown colleges and online drag queen boutiques. Throughout the five acts, the line between theatre and reality begins to blur and purposely gets greatly out of focus. But somehow it all charmingly works.

The brilliant on so many levels (singing, dancing, playwriting, acting, etc), Taylor Mac is a shape-shifting Lily that wants to become somewhat a man so he can be married to The Bride. His Lily's journey of transition is the show's narrative. Along the way, Lily encounters what is institutional longing, changing cultural expectations, Hegalian philosophy and the expression of flowery Haiku.

Like Bertoldt Brecht, Peter Brook and others, Mac has been influenced by Japanese Noh theatre. Mac crafted this show based upon the five part Noh Theatre traditional structure. The Lily's Revenge more or less follows the Noh traditional forms in several ways: the notion of all day production with interludes between acts, the godlike actors and human actors, the orchestration and musicality of the production and a strongly imaged finale.

The retro-music both in solo and chorus is charming and beautifully performed. The talented cast and crew work like a finely honed orchestra, each performing their part often with flourish and verve. Each act had its own particular environment. Sarah  Brown's scenic design was more settings and arrangements than true sets. They cleverly showcased and framed the performances quite well.

Though the whole cast was entertaining and seemed to enjoy what they were doing, there were several notable performers including Teri Gamble as Baby's Breath, Davina Cohen as Bride Deity and Adeola Role as a Flower Girl Mary (they were all named Mary) and then as Susan Stewart. Each of the three has a wonderful voice.

On the less than positive side, I felt that the dream sequence mostly dance act went on too long, but maybe strange dreams tend to. Also the finale seemed to take forever. It tended to be much more operatic than Duck Amuck (a classic Daffy Duck shapeshifting cartoon) performance art characterizations than the rest of the production.

If the 4 to 5 hours suggested by the time listed for the show appears intimidating, think Verdi's Aida at 4+ hours and Wagner's Gotterdammerung at 5+ hours. But this show has a lot of sassy and flashy drag queens and often raucus humor. However, you should probably pack a lunch or eat one there (they sell sandwiches and drinks). Lily's revenge is not an exhausting experience but a lot of prolonged fun.

Created from the life and imagination of Taylor Mac, this is an exploration of love without boundaries through a prism of Charles Ludlam's version of the Theatre of the Ridiculous. Though not a family show, this is a theatrical experience that is hard to describe in totality except by its many often entertainingly challenging parts. I guess you just have to be there to get it.

An ambitious undertaking, the depth and breath of this production is impressive. A.R.T. should be congratulated for its courage and fortitude to bring this theatrical event off. The Lily's Revenge is a provocative culturally entertaining experience that pushes the boundaries of contemporary theatre. It should be seen by everyone interested in what theatre can be.