Neo Romantic Landscapes and Beyond 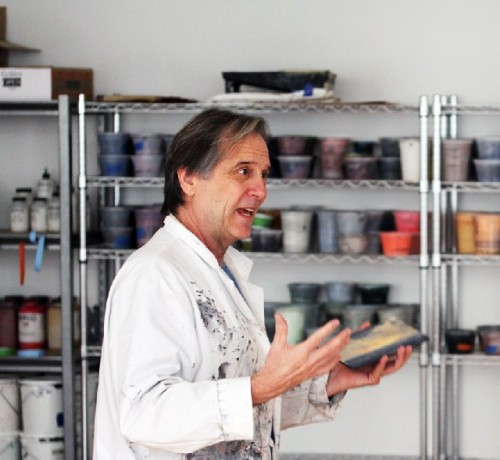 Stephen Hannock at work in the studio. Photos courtesy of David Lachman. 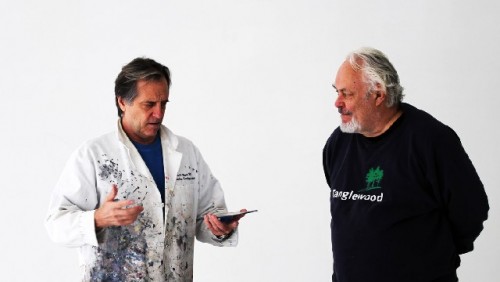 Hannock and Charles Giuliano in dialogue. 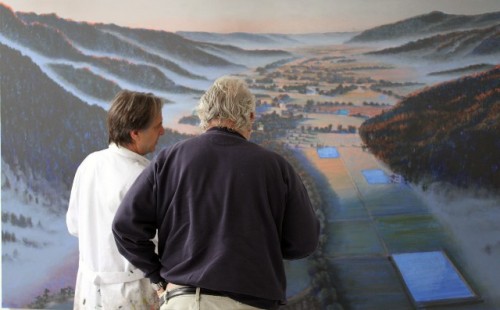 Looking at the work. 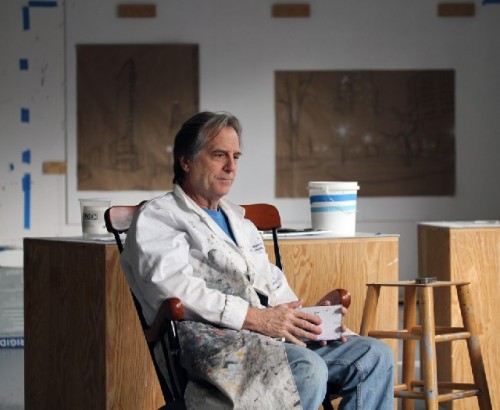 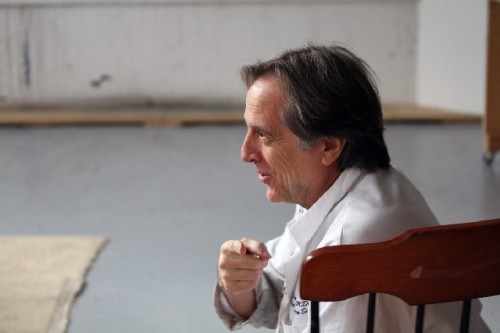 Charles Giuliano Can you describe the process involved in collaborations with the architects and developers of the restaurants?

Stephen Hannock When I sat down with Peter Bentel (architect) he described long lights coming down in the space. They created their own patterns. To me they looked like reverse rockets. I created a 30’ triptych of what I called my “Squid Boats.” It was a series started after a trip to China. When you look out at the South China Sea the horizon is speckled with illuminations which are brighter or dimmer according to how close the squid boats are to the shore. I just imagined these things taking off like rockets. That’s all done with power tools. It’s basically a dark canvas and you sculpt it by ripping into the under painting. So that’s where we went for that piece.

When Colicchio and Sons was being built right under the High Line Tom called and said “Talk to Peter.” When I called Peter he said “We think High Line is going to be a big deal.” It was years before they had the money to restore it. I started talking with Robert Hammond and Joshua David who were the two guys who basically skipped work one day and went to a meeting about what they were going to do with this old, rusty infrastructure. They got to be friends and said “Wouldn’t it be great to keep it as a park? A destination for people visiting New York.”

I figured let’s celebrate this in its current state. It was winter and we were about to get snow so I loved the idea of having all the roof tops which we saw from above, from the DEA building, which abuts Colicchio and Sons. We had an aerial view of the whole thing. That’s where this piece went and the stories and collaged images that surfaced in this project were phenomenal how they wove into each other.

I was taken up into Frank Gehry’s building with Frank, Barry Diller, and Joe Rose whose company built the building. We went up there and it turns out he owns the whole block.  Joe Rose was the guy who financed Bridget’s Garden for the city. So I put a 180 degree collage of the participants in the Garden dedication including Sting and Dominic Miller’s performance of “Fields of Gold.” That’s one of dozens and dozens of stories woven into this stage set of the New York High Line.

Peter told me that for this restaurant “Tom is going to be using sauces. Let’s get more rich with this. More detail. More moody.”

CG Where does Sting come into the movie?

SH He did all the music.

SH No. But we’ll never be able to sell the movie unless EMI is paid because the music was given to us. He gave Wolfram the music to use.

CG So what can you do with the film? It’s being seen here (WFF) but it seems it’s not getting much distribution.

SH It provides a lot of background on what I’m trying to do. Parts of it are on line and there are lots of film festivals. Wolfram uses it to get other work. The next job. Eventually, it may be bought. In which case all that would be paid for. The music would have to be paid for. It will be more expensive than it is now but still much cheaper than getting a Hollywood crew out to do this thing. That’s the advantage that short films and documentaries have. Film directors are like painters. They get an idea that excites them. They bring the films to life on credit cards or whatever it takes to keep them going. Every one of them has their own stories.

CG Did you contribute to the film?

SH No but one of my backers did. Tiger Williams who gave one of my pieces to the Metropolitan Museum, he and his wife. He’s a financial guy I have gotten to know over the years through one of my hockey friends. (Hannock's dad a former semi-pro player. Stephen played goalie for Bowdoin College.) He (Williams) was captain of the Yale hockey team. He gets a lot of puck knuckleheads working for him. That’s how this stuff happens. It’s all part of my life.

Regarding these movies you can’t minimize what video does today. As someone who is making art your goal is to affect the culture in some way. What that is is always vague. But you know you’re trying to have some impact on the culture. If telling your story is articulated with the help of a film, well, that’s a no brainer. I can’t make a movie about myself. I just don’t know that much about it. It’s a waste of time. Any time, including talking with critics (laughs), is taking me away from making paintings. They have to get done. I’m here every day. And trying to raise a child on my own.

CG Are you more focused on staying here (The Berkshires) and getting work done? You used to do a lot of traveling.

SH I still do that. The traveling. But that’s all part of the deal. This Spring I’m going to India for the first time. I’m going to Istanbul. I’ve had an idea for a painting for a long time. For ten years.

My buddy (Sting) has a concert in India. Friends of his are in London and we stay with friends of this guy who I met in Italy at Sting’s place. He said “You’ve got to come.” I was thinking this is the first Spring where I wasn’t showing so I said, I’ve got to do this.  The trip will be tough, exhausting, two or three weeks. We’ll cover a lot of territory. I’ve been given glimpses of some of the stuff we’re going to do and I really don’t want to pass this up. That’s kind of how these things happen.

Meantime, you get these ideas for paintings and the act of bringing these ideas to life is an incredibly exciting way to live. It’s very tough to have something interfere with that. When people see the numbers being paid for these paintings, and hear what I’m getting (small percentage), they can’t believe that this is a good deal. To affect the culture in this day and age when information is traveling literally at the speed of light requires a lot of people. These people have to get paid. They don’t owe it you because you’re such a breathtaking artist. It’s hard work. Even though most of the money from these paintings goes to other people, every person deserves it. Every person is getting paid what they’re worth. Nobody is taking that which they don’t deserve. That has not always been the case as you well know.

CG Your work is seen in the Metropolitan Museum of Art. It’s not seen in the Whitney Biennial or on the global biennial circuit. The major art magazines don’t write features about your work. Perhaps in the art world you’re regarded as Joe Six Pack.

CG (Pause) I can’t find just the right word for it.

SH I know what you’re saying. Clearly landscape is not the white hot center of the art scene. I don’t have to tell You that the press and people who are the custodians of this go where the art takes them. Which is the cool thing about art. They’re not the ones determining who does what. The artists are the ones doing that. There is a lot of really exciting stuff going on. My piece wasn’t in the Whitney Biennial but I feel that we participated when April Gornik and Mark Innerst were in it during the mid 1980s. That’s when the Neo Romantic Landscape came into the top surface of contemporary art. There are a half dozen of us who have stayed there and are doing this.

CG Who are the half dozen?

SH The people who I’m in touch with are April Gornik and Mark Innerst. That’s three. There are a bunch of others. I’m thinking of the Newsweek article that came out at that time that we were mentioned in. Greg Crane was another. Kim Keever isn’t painting anymore. He takes photographs. He builds these worlds in giant underwater aquariums. He creates these atmospheres and photographs them. You can’t believe the weather he has going on in these things.

Where I am intrigued by the culture is now more through filmmakers. Guys who have been around for awhile. What’s happened with me is, the pieces I’ve been making over the years, have been done in a way where the people and adventures that come to my mind, mean more to me than the topography that I’m painting. That’s where the text happens. It’s an extension of the palimpsests which I do on the envelopes. That was the nascent period of this. It started in the late 1980s where I was just mopping up paint. To soak up paint before I polished it. Going to throw one of the envelopes away I missed the waste basket. What was on the floor was better than the painting I was working on. I put it up on the window sill and got into this monotype of this envelope which had travel documentation on it. It had an economic value. And it was from somebody. So when you’re working on an object that has that kind of life woven into it that’s much more fun than working on an inert canvas. Take that to the level of weaving diaries and stories and places you’ve gone to it’s a real adventure. You end up calling these people and saying what’s going on? Some of what they tell you may wind up in that painting.  But you can’t do that when you’re twenty five. You do that after you’re fifty when you’ve lived.

CG How do you feel about the art world?

SH I don’t feel one way or the other. It is what it is. It’s fine. Part of it has been very kind to me. Part of it has completely ignored me. That’s changing with this text. There’s people who think I’m ruining these paintings by writing on them. You’re going to piss off somebody no matter where you go. There are curators out there, however, who think this is a major break in the tradition of landscape subject matter since the 19th century. It’s really different. It’s gone into abstraction. It sets the stage and tells the story much the way filmmakers do. That’s the new thing and why I’m getting fussed over. Quite frankly they’re good paintings. I would be the first one to tell you if they were lousy. (Both laughing) Do you disagree?

CG Why would I keep coming back?

SH Something’s working here. I’m not sure what that is. There are failures. It takes you awhile to figure out what they are and then you move from there.